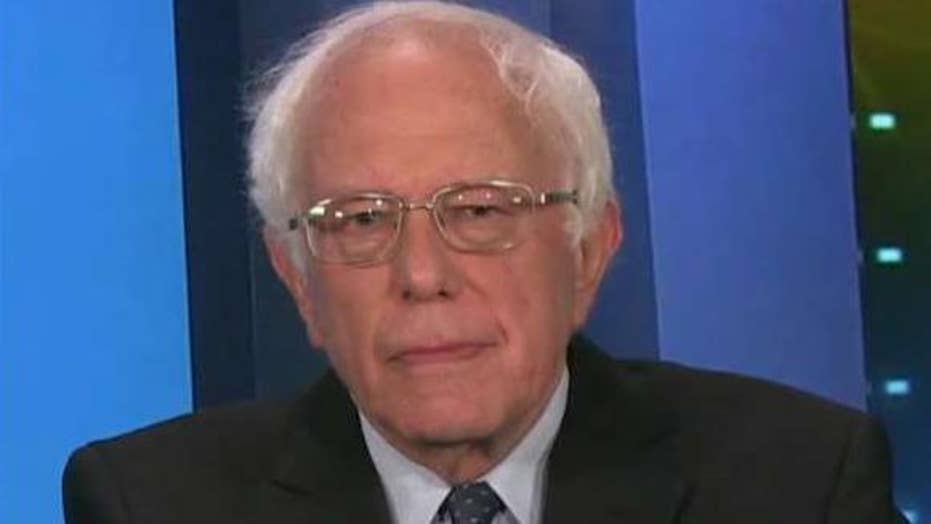 Sen. Bernie Sanders, I-Vt., is in full force with his push for democratic socialism as he looks to increase support for his 2020 presidential campaign, and is calling for a "political revolution" in the United States.

Days after an address at George Washington University in which he rolled out his platform, Sanders brought his message of income equality to "Fox News Sunday."

"If we're going to bring about real change in this country ... we need fundamental change. We need a political revolution," Sanders told Chris Wallace.

SEN. BERNIE SANDERS: WE NEED AN ECONOMY AND GOVERNMENT THAT WORKS FOR ALL, NOT JUST THE 1 PERCENT

Sanders pointed to the growth seen by the wealthy, in contrast to a decline for those less fortunate.

During his GWU speech, in which he rolled out his democratic socialist platform, Sanders promoted the idea of a "21st Century Economic Bill of Rights." He said he was looking to fulfill the vision that President Franklin Roosevelt had in 1944, a year before he died. Sanders' Bill of Rights includes rights to a job with a living wage, secure retirement, health care, education, affordable housing and a clean environment.

The only way to achieve the goals of his democratic socialist agenda is for millions of people to work together.

"I think, frankly, I am the strongest candidate to defeat Trump."

Wallace challenged Sanders by referring to criticism based on the idea that while the senator is marketing democratic socialism as a way to create social programs, it really involves a more "dramatic change" to the financial foundation of the country.

Sanders admitted that this is "basically true," as his plans involve breaking up powerful financial institutions, getting tough on drug companies and moving American health insurance to a single-payer system.

"The time is now for us to say, "You know what, we need an economy and a government that works for all of us, not just the 1 percent, and if people want to accuse me of believing in that, I plead guilty. That's what I believe in."

Sanders' speech was premised on the idea that as long as Americans have difficulty affording health care, cannot afford education and have to work 60 hours a week to get by, they are not "truly free." He promised to release additional details of his proposals over the course of his campaign.

Wallace asked Sanders if his platform includes support for government control of major institutions. He brought up a quote from 1976 where Sanders said, "I favor the public ownership of utilities, banks and major industries."

When asked if he still believed in this, Sanders did not directly answer the question but did not deny it.

"In the city where I am right now, we do have public ownership of our electric department, and they do a pretty good job," he said. "Do I believe that workers should have more say and be sitting on the boards of large corporations? Yes, I do. Do I believe that we should break up some of the major banks on Wall Street and support credit unions and community banks? Yes, I do."

Sanders is among the current poll leaders in a field of more than two dozen candidates vying for the Democratic Party's nomination, although he trails Joe Biden. Despite this, he is confident in his ability to win in a general election.

"I think, frankly, I am the strongest candidate to defeat Trump," he said. "We can win in Pennsylvania, Wisconsin and Michigan, and some of the other battleground states, and that's a fight that I look forward to." His remarks come as a Fox News Poll released Sunday shows Biden tops the list of Democratic contenders with 32 percent support among primary voters. Bernie Sanders trails at 13 percent, Elizabeth Warren at 9 percent, and Pete Buttigieg and Kamala Harris both at 8 percent.

Sanders is now gearing up for the first Democratic primary debate, which will be split into two groups on June 26-27. He will face a group that includes current front-runner Joe Biden, Sen. Kamala Harris, D-Calif., and South Bend, Ind. Mayor Pete Buttigieg.