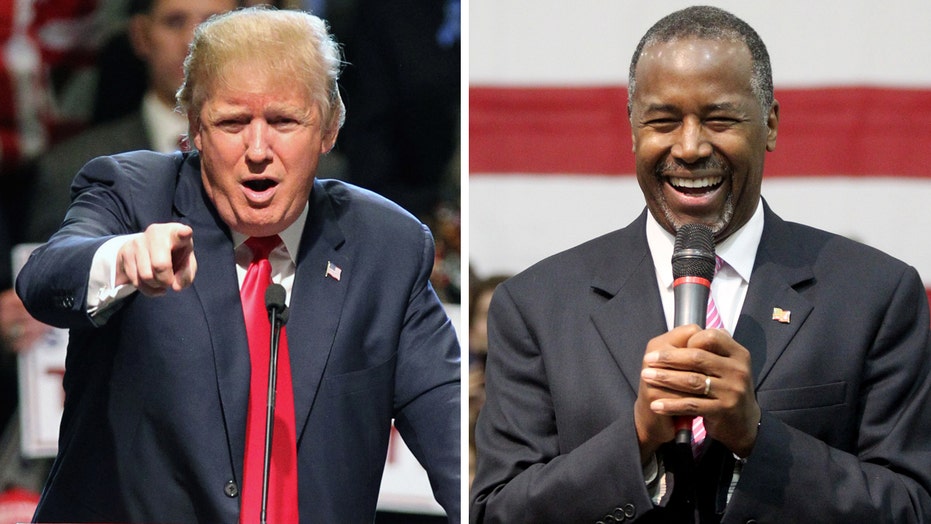 Ben Carson surges ahead of Trump in new poll

Donald Trump, after holding back at last week's debate, challenged Ben Carson's fitness for office on Tuesday, saying "Ben can't do the job."

He blasted Carson after a second poll showed the retired neurosurgeon taking the lead over Trump nationally. The Wall Street Journal/NBC News poll showed Carson leading Trump, 29-23 percent, among GOP primary voters. Asked about the findings on Fox News, Trump said he doesn't know what it is about Carson that's attracting a following.

"I like Ben, but Ben can't do the job, I mean there's no question about it," Trump said. "He's not going to be able to negotiate with China. It's not his thing ... It's not in his wheelhouse, he's never done it before, and I don't think it's, you know, meant for him."

Trump went on to call Carson "very weak on immigration" and called his position on Medicare the "end of his campaign."

Trump asserted that Carson wants to end Medicare -- though Carson recently told "Fox News Sunday" that's no longer the case. Carson said he changed his mind after talking to a lot of economists.

"That was the old plan," Carson recently "Fox News Sunday," saying he now prefers so-called health savings accounts as an alternative to Medicare.

Though Trump is back to attacking Carson, both candidates are effectively outsiders in a race still heavily populated by current and former senators and governors. Carson, defending his appeal in a recent interview on NBC's "Meet the Press," said the government was set up for "citizen statesmen, not for career politicians."

Carson has mostly avoided criticizing any other candidates, at debates and off-stage.

Trump, too, avoided sparring with Carson at last week's debate in Colorado. The candidates instead ended up banding together, during and after the debate, to criticize the CNBC moderators -- and, in the last couple days, seek changes in the debate process.

That push, though, remains in flux. More than a dozen campaigns met in suburban Washington on Sunday, a meeting that produced a draft letter to debate host networks seeking assurances on a range of topics -- including assurances that candidates would be allowed to give opening and closing statements.

But Trump has since thrown a wrench into that push by saying the campaign would continue to "negotiate directly" with networks on debate criteria.  Ohio Gov. John Kasich, New Jersey Gov. Chris Christie and former HP CEO Carly Fiorina also have not signed onto the new push, though other campaigns are reviewing the letter. The push for changes is not expected to affect the upcoming Nov. 10 GOP debate, hosted by Fox Business Network.

The book speaks directly to voters, making the case that Trump has the experience and business savvy to accomplish things that traditional, all-talk, no-action politicians can't. It comes as Trump is continuing to adjust to a new phase of the campaign in which the once undisputed front-runner is now facing heightened competition from a number of his GOP rivals.

"This book is designed to give the reader a better understanding of me and my ideas for our future," Trump writes. "I'm a really nice guy, but I'm also passionate and determined to make our country great again."