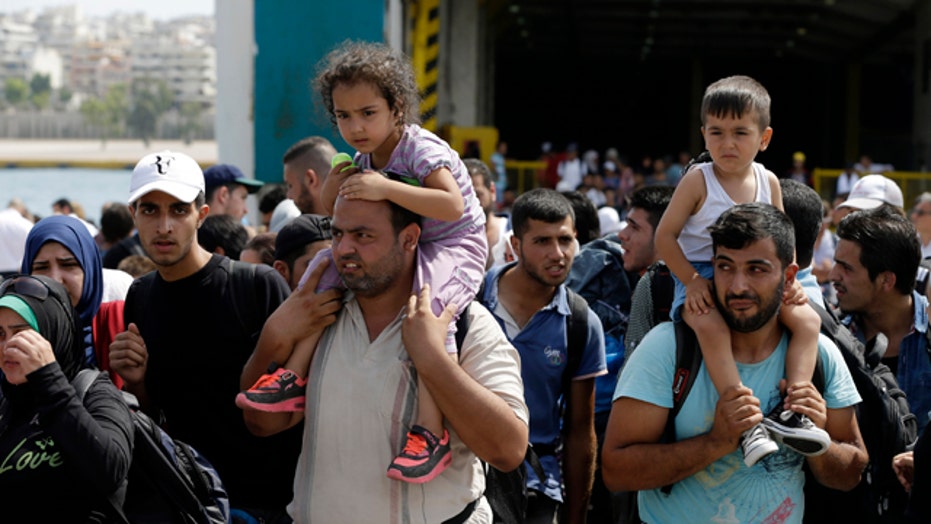 WASHINGTON – In response to international calls to help ease the burden of the Syrian refugee crisis, the Obama administration reportedly is prepared to increase the number of refugees the U.S. resettles -- by roughly 5,000.

The Associated Press reported Wednesday that, according to unnamed sources, Secretary of State John Kerry told members of Congress in a closed-door meeting on Capitol Hill that the United States will boost its worldwide quota for resettling refugees from 70,000 to 75,000 next year, a number that could increase further. A fraction of those would be from Syria.

A 5,000-person increase would be far short of what aid groups and others have called for – the International Rescue Committee and other groups have urged the U.S. to resettle 65,000 Syrian refugees by the end of 2016.

The administration, though, has struggled to respond to the growing crisis -- and strike a balance between calls to accept more refugees and warnings that bringing in thousands from Islamic State-controlled territory would pose a grave security risk.

Kerry, without putting a number on it, said Wednesday that the U.S. would allow more refugees into the country.

"We are looking hard at the number that we can specifically manage with respect to the crisis in Syria and Europe," he said. "That's being vetted fully right now."

Europeans countries already are facing the prospect of hundreds of thousands of refugees, many from Syria, seeking entry. Australia announced Wednesday that their country would permanently resettle 12,000 Syrian refugees.

Without spelling out their own proposals, Obama administration officials have acknowledged the extent of the humanitarian crisis.

Director of National Intelligence James Clapper said Wednesday that the current refugee crisis is a "disaster of Biblical proportions." At the same time, Clapper said he worries about the background of some of those fleeing Iraq and Syria.

"Exactly what's their background?" Clapper said during an industry conference. "We don't obviously put it past the likes of ISIL to infiltrate operatives among these refugees."

Clapper went on to say the U.S. has a program in place to screen those coming into the country but he is not as confident that some European nations possess that same capability.

The White House is facing pressure from all sides to do more to address the crisis.

Shortly after Kerry's meeting, Republican Sen. John McCain of Arizona went to the Senate floor to urge stronger leadership from Obama on stemming violence in the Middle East and North Africa. He stood next to an enlarged, close-up photo of the dead body of three-year old Aylan Kurdi, a Syrian boy who drowned along with his 5-year-old brother and mother when their small rubber boat capsized as it headed for Greece.

"This image has haunted the world," McCain said. "But what should haunt us even more than the horror unfolding before our eyes is the thought that the United States will continue to do nothing meaningful about it."

White House Press Secretary Josh Earnest said Tuesday that the Obama administration has been looking at a "range of approaches" for assisting U.S. allies with 340,000 people freshly arrived from the Middle East, Africa and Asia.

Democratic presidential candidate Hillary Rodham Clinton, Kerry's predecessor, called for an "emergency global gathering" at the United Nations General Assembly meeting later this month, where countries could pledge aid money and to accept some of the refugees.

The top three groups of people resettled by the U.S. are Burmese, Iraqis and Somalis.

While Germany braces for some 800,000 asylum seekers this year, the U.S. hadn't previously said if it would increase its worldwide quota. Throughout Syria's 4 1/2-year civil war, the U.S. has accepted only about 1,500 Syrians -- a tiny percentage of the 11.6 million people who have been chased out of the country or uprooted from their homes.

The diplomacy appears nowhere near ending violence that started in 2011 with a government crackdown on political opponents, spawning an armed insurgency and eventually leading to Islamic State extremists seizing much of the country.