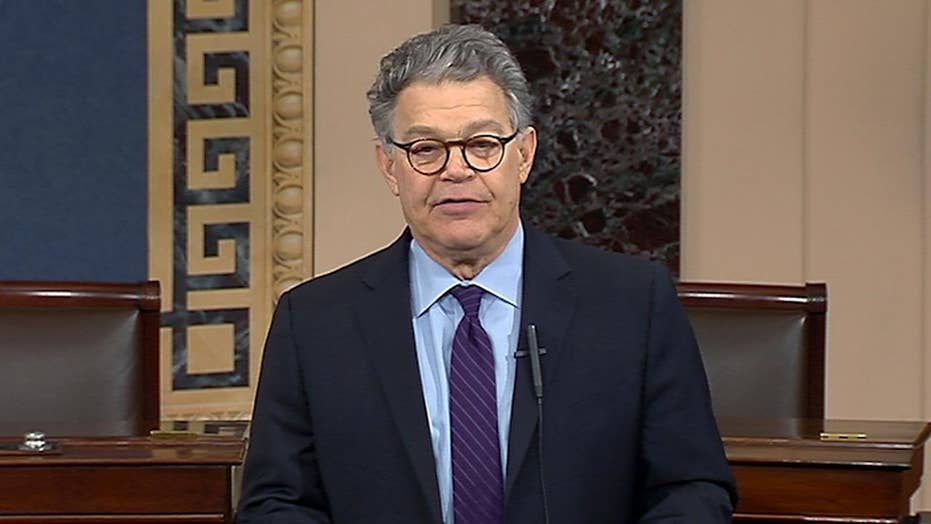 Sen. Al Franken's Senate floor announcement that he is leaving Congress amid mounting allegations of sexual misconduct is coming under fire by many for lacking an apology; analysis from Beverly Hallberg, president of the District Media Group, and Erin Delmore, senior political correspondent for Bustle.com.

Minnesota Democratic Sen. Al Franken resigned from Congress two weeks ago amid continuing sexual-misconduct allegations. However, he’s yet to say when he’ll empty his Capitol Hill office, even after his replacement was appointed earlier this week.

“Tina Smith will make an excellent United States senator. …  I look forward to working with her on ensuring a speedy and seamless transition,” Franken said after the state lieutenant governor was appointed, without mentioning when he’ll leave.

In his Dec. 7 resignation speech, Franken said only that he’ll be leaving in the “coming weeks.”

Multiple people on Capitol Hill, including those in Senate leadership, told Fox News that they doesn’t know when Franken will leave.

“I’ll be coming home,” was Franken’s only response to a question after future plans, after his Senate floor resignation speech.

Franken was back at work this week, casting votes in the Senate, participating in a committee hearing, attending a senators-only luncheon with Democrats and even posing for a picture with a group of high school students.

The two-term senator, first elected in 2008, had initially intended to let a Senate ethics committee investigate the allegations against him.

However, a seventh claim on Dec. 6., by a woman claiming Franken tried to forcibly kiss her in 2006, resulted in a chorus of female Democratic senators -- including New York’s Kirsten Gillibrand and California’s Kamala Harris -- calling for his resignation, effectively forcing his departure.

Franken, in his speech, noted his original plan regarding an ethics investigation, which he thought would help. And he argued that “some of the allegations against me are simply not true. Others, I remember very differently.”

Franken also suggested that him leaving elected office while President Trump remains in the Oval Office after bragged on tape about his history of sexual misconduct is "ironic."

Such statements have led to speculation that Franken, a former comedian, is having second thoughts about his next steps, or that he’s at least in no hurry to be run out of Washington, especially after members of both political parties have raised similar arguments.

Zephyr Teachout, a Democrat who ran for governor of New York, said in an op-ed in the New York Times that she was left with a sense of "something went wrong" when Franken announced he was stepping down.

"Zero tolerance (of sexual misconduct) should go hand in hand with two other things: due process and proportionality," Teachout wrote. "Both were missing in the hasty call for Senator Franken's resignation."

She also said due process "means a fair, full investigation, with a chance for the accused to respond."

Two other members of Congress have recently resigned, then left office after allegations of sexual misconduct.

And Arizona GOP Rep. Trent Franks resigned and left office about a day after being informed about a House ethics investigation on him regarding alleged sexual harassment.