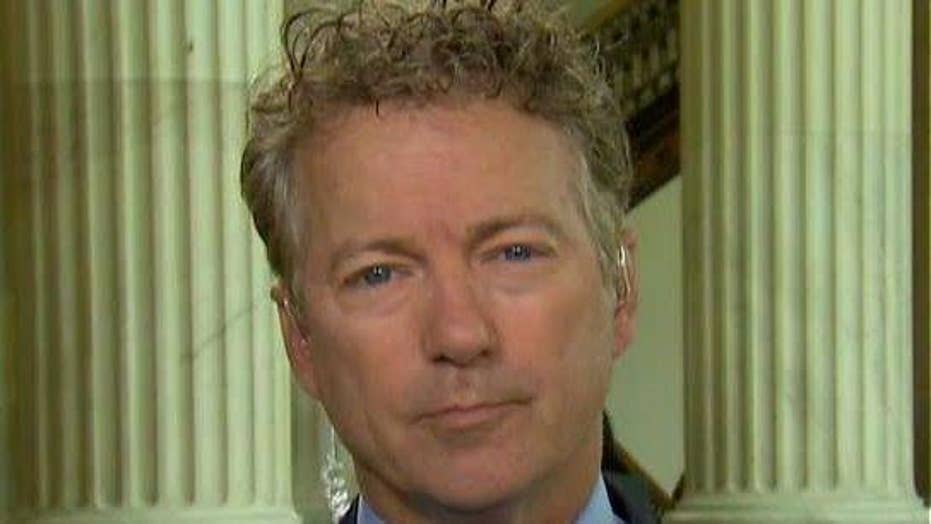 Paul: Will take a little bit of work to get me to 'yes' vote

On 'Your World,' lawmaker says the House Freedom Caucus made the healthcare reform bill a lot less bad

While President Trump took a victory lap with House Republicans after their health care bill passed its first big test Thursday, the hard work is just beginning for the majority party whose mission these past seven years has been ObamaCare’s demise.

Senate approval will be a much higher bar to clear: There’s no shortage of bipartisan criticism from the upper chamber right now, and the GOP holds a considerably smaller majority margin on that half of the Hill.

All this means Republican senators almost certainly will rewrite the legislation, or start over, as the deliberative body takes up the issue – at its own pace.

Sen. Bill Cassidy, R-La., said the Senate will write its own bill, stressing senators still need to see an official estimate on the updated plan’s impact for consumers and taxpayers – something the House did not have in hand when Republicans narrowly approved the American Health Care Act on a 217-213 vote Thursday.

"We must manage expectations and remain focused on the art of the doable as we move forward," Senate Finance Committee Chairman Orrin Hatch, R-Utah, said in a statement.

Republicans enjoy a relatively comfortable margin in the House. Even with that, an earlier version of the bill had to be yanked from the floor in March for lack of support; and with 20 GOP defections on Thursday, the majority party was just two votes shy of another collapse.

The Senate is different, and arguably trickier. Republicans have a slim 52-48 majority, and it takes 60 votes to pass most legislation.

Republicans are eyeing special rules to pass a version with a simple majority (or 50 votes plus a tie-breaker from Vice President Pence). But not only do those rules limit what changes can be considered, it’s far from a sure thing that Majority Leader Mitch McConnell, R-Ky., can cobble together 50 or 51 votes. And if a different version does pass the Senate, that would have to be reconciled with the House bill.

McConnell indicated in a statement the Senate plans to act, in some capacity.

“Obamacare has failed the American people and must be repealed and replaced,” he said. “As Congress considers this legislation, the administration will continue working to deliver relief and stabilize health markets, and Congress will continue to act on legislation to provide more choices and freedom in health care decisions.”

The House bill as passed would scrap the Affordable Care Act’s penalties for not buying insurance as well as a number of taxes; replace subsidies for insurance with tax credits; cut Medicaid; and pull back on coverage requirements for insurance companies. In a provision that helped the bill pass the House, the new version would let states get a waiver so insurers can set higher premiums for those with pre-existing conditions.

Republican supporters of the bill say changes are necessary to curb rising premiums and prevent insurers from fleeing markets across the country.

But critics say the changes would make the system worse – leading to higher costs for the most vulnerable patients.

But moderate Republicans have plenty of concerns about the language, too.

Sen. Lindsey Graham, R-S.C., went on a tweet-storm blasting ObamaCare in its current form while calling for a bipartisan replacement. He warned the House version “has not been scored, amendments not allowed, and 3 hours final debate -- should be viewed with caution.”

Moderates are worried about the Medicaid cuts and other provisions. Sen. Rob Portman, R-Ohio, said he does not support the bill “as currently constructed” for that reason.

“It’s going to take a little bit of work to get me to a yes vote, but I do have an open mind,” he said.

Trump on Friday stayed positive about the bill’s chances – after having successfully helped revive the plan, with Speaker Paul Ryan, in the House.

“Big win in the House - very exciting! But when everything comes together with the inclusion of Phase 2, we will have truly great healthcare!” he tweeted.