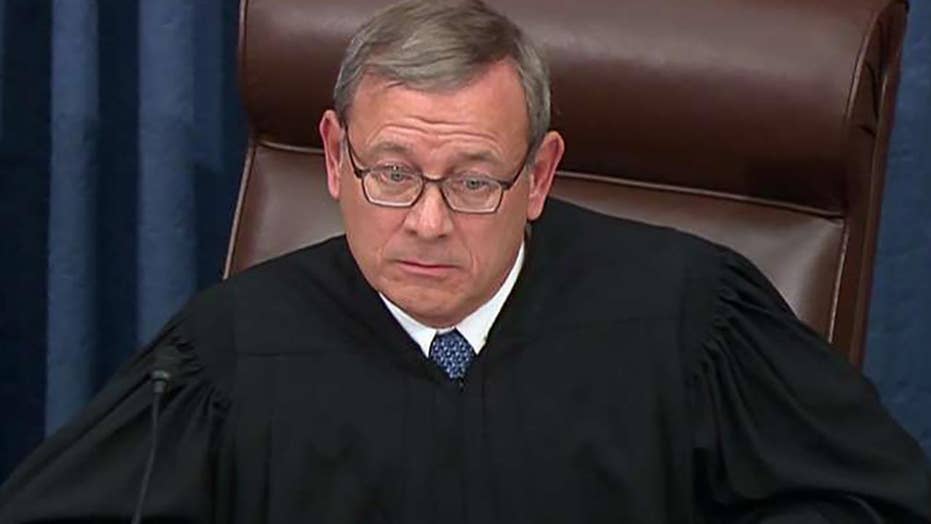 EXCLUSIVE: The attorneys general of 21 states have come forward with a blistering rebuke of the impeachment of President Trump, asserting that it "establishes a dangerous historical precedent."

The Republican attorneys general, in a letter submitted to the Senate Wednesday morning and obtained by Fox News, urged the chamber conducting Trump's trial to "reject" the impeachment articles.

"If not expressly repudiated by the Senate, the theories animating both Articles will set a precedent that is entirely contrary to the Framers' design and ruinous to the most important governmental structure protections contained in our Constitution: the separation of powers," they wrote.

The letter accuses House Democrats of impeaching Trump as a politically motivated response to the 2016 election and warned that it poses a threat to the 2020 election as well.

"Even an unsuccessful effort to impeach the President undermines the integrity of the 2020 presidential election because it weaponizes a process that should only be initiated in exceedingly rare circumstances and should never be used for partisan purposes," the letter continued.

The attorneys general proceeded to pick apart the impeachment articles themselves. The abuse of power article, they claimed, "is based upon a constitutionally-flawed theory" that is "infinitely expansive and subjective" because it relies on the motivation the president had for "exercising concededly lawful constitutional authority" (emphasis in original) that Democrats deemed to be corrupt.

TRUMP, IN DAVOS, APPEARS CONFIDENT OF SENATE IMPEACHMENT TRIAL OUTCOME: 'WE HAVE A GREAT CASE'

"It cannot be a legitimate basis to impeach a President for acting in a legal manner that may also be politically advantageous," they continued. "Such a standard would be cause for the impeachment of virtually every President, past, present, and future."

The attorneys general claimed that the second article of impeachment, obstruction of Congress, is "equally flawed," arguing that the House's theory means that a president can be impeached for invoking executive privilege. Doing so would render the privilege "meaningless," they said, because it would place the privilege "under unilateral control of the House."

Rather than impeach Trump for using privilege to block witnesses from testifying before the House's impeachment inquiry, they should have gone to court to challenge the president and enforce subpoenas, they said.

The precedent set by this impeachment, they warned, "will erode the separation of powers shared by the executive and legislative branches by subjugating future Presidents to the whims of the majority opposition party in the House of Representatives."

The letter comes as the trial moves into full swing, with opening arguments Wednesday following a heated floor session on the rules governing proceedings a day earlier. House Democrats slammed Senate Republicans for turning back their calls for witnesses, for now, right out of the gate.

“It’s embarrassing,” House Judiciary Committee Chairman Jerry Nadler, D-N.Y., said Tuesday. “The president is on trial in the Senate, but the Senate is on trial in the eyes of the American people. Will you vote to allow all the relevant evidence to be presented here? Or will you betray your pledge to be an impartial juror? ... Will you permit us to present you with the entire record of the president's misconduct? Or will you instead choose to be complicit in the president's coverup? So far I'm sad to say I see a lot of senators voting for a coverup, voting to deny witnesses, an absolutely indefensible vote, obviously a treacherous vote.”