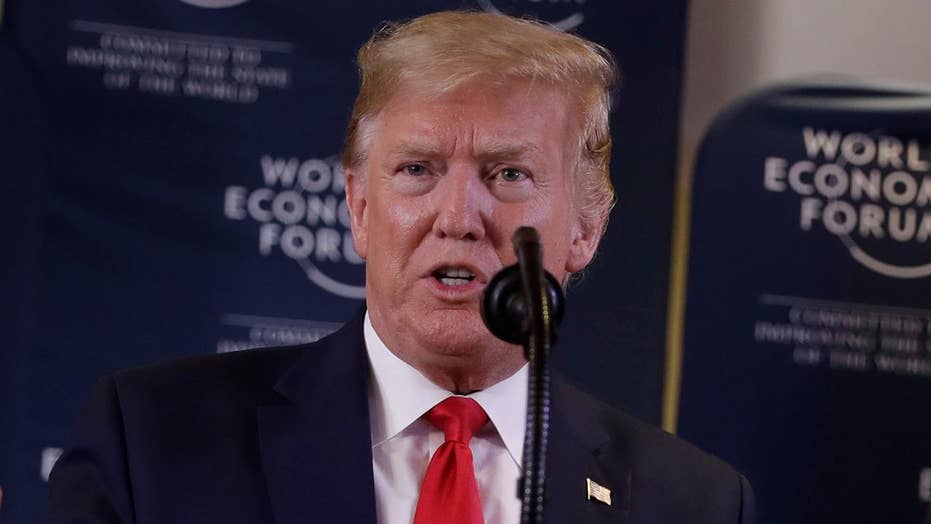 President Trump says during a press conference in Davos, Switzerland that he would support former National Security Adviser John Bolton and current Cabinet members testifying in the Senate impeachment trial but the national security threat is too great.

President Trump was set to hold a surprise news conference Wednesday as he departed the World Economic Forum in Davos, Switzerland, after earlier voicing optimism regarding the Senate impeachment trial during a power breakfast with American CEOs and business leaders.

“We have a great case,” the president said to reporters gathered at the Davos Congress Center after his motorcade arrived from the Intercontinental Hotel. He added that he thought his legal team was doing “a very good job,” according to the Associated Press.

The brief comment from Trump came just hours after a marathon first day of the impeachment trial concluded across the Atlantic in Washington, capped off just after midnight by a shouting match between Republicans and Democrats that prompted Chief Justice John Roberts to admonish both sides.

President Trump flashes a thumbs-up as he arrives at the World Economic Forum in Davos, Switzerland, Wednesday, Jan. 22, 2020. (Associated Press)

The confrontation was sparked when Rep. Jerry Nadler, D-N.Y., accused Senate Republicans of “voting for a cover-up” after a series of trial-rules amendments proposed by Senate Democrats went down in defeat in party-line votes.

The amendments had called for permitting testimony from new witnesses and the release of documents, but were rejected 53-47 each time.

While most of the Senate spent Tuesday sitting in silence at the impeachment trial, Trump spent part of the day boasting of a robust U.S. economy in a speech to the global business community at the Switzerland gathering.

“Today I'm proud to declare the United States is in the midst of an economic boom, the likes of which the world has never seen before,” he said, vowing to never to let “radical socialists destroy our economy.”

Trump was expected to participate in a pair of bilateral press conferences with leaders from Kurdistan and Iraq before returning to Washington later Wednesday.

Fox News' Rachel O'Neill and Edmund DeMarche and the Associated Press contributed to this story.