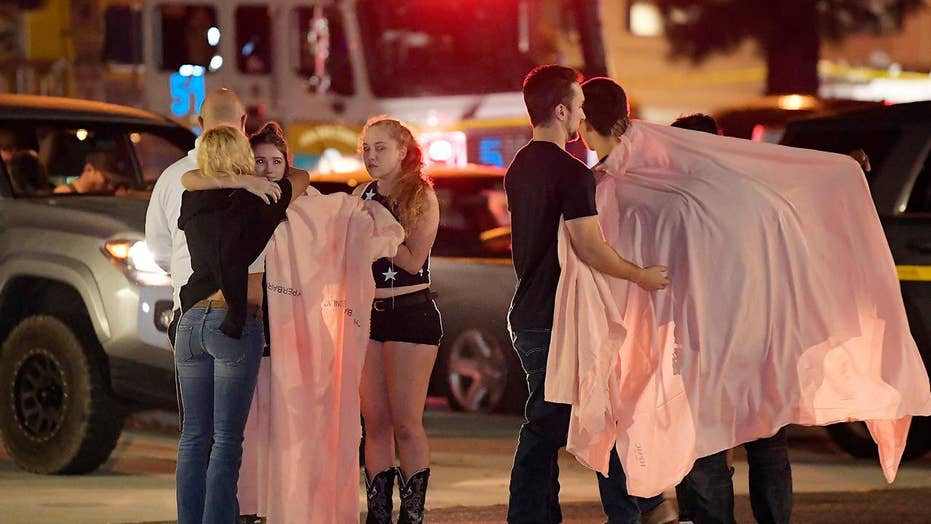 Mitchell Hunter says the shooter was wearing a trench coat and shooting a handgun with a long magazine.

As news of the mass shooting at a California bar unfolded, several Democrats promised to use their new majority in the House to address gun violence.

Authorities identified the gunman as 28-year-old Ian David Long, a Marine Corps veteran. Witnesses said he was clad in black clutching a semi-automatic pistol and threw smoke bombs before he opened fire inside Borderline Bar & Grill in Thousand Oaks, California, late Wednesday night, killing at least 12 people, including a veteran sheriff's sergeant nearing retirement. The gunman was also found dead inside the bar, although it's unclear how he died.

Hundreds of people — including students from California Lutheran University and private Christian school Pepperdine University — were inside the bar, hosting a country music event, when the shooting occurred.

President Trump said he had been briefed on the shooting and praised the "great bravery shown by police."

Ventura County Sheriff's Office Sgt. Ron Helus, a 29-year police veteran, was fatally shot when he rushed into the venue in response to the shooting. He left behind a wife and son.

He also ordered the White House flags to be flown at half-staff.

California Sen. Dianne Feinstein blasted Trump and Republicans for the gun violence that's plagued the nation, particularly in the past few weeks.

"This failure to act is cowardice of epic proportions. We may not be able to stop all gun violence, but that doesn’t mean Republicans should be allowed to bury their heads in the sand and not try to stop any of it," Feinstein said.

"What we’re lacking is intestinal fortitude from congressional Republicans and President Trump to say enough is enough," she continued. "As long as they stand in fear of the NRA and worry more about the power of the gun lobby than the lives of their fellow citizens, we’ll see more Thousand Oaks, more bodies lying at the foot of failed Republican leadership."

EVERYTHING WE KNOW ABOUT THE GUNMAN SO FAR

Feinstein also maintained that despite California's staunch gun laws, the state can't keep guns coming in from other states "without stronger laws."

House Democrats promised to address gun violence in the U.S., especially now that they've gained a majority in the chamber after the midterm elections.

"Devastated to hear about the mass shooting in Thousand Oaks last night. My condolences to all the victims. I am more committed than ever to addressing the scourge of gun violence," California Rep. John Garamendi said.

"This is not normal," said Rep. Mark DeSaulnier, D-Calif. "Repeated failure to act in the wake of these shootings has allowed more to take place. Congress must come together and take action to protect our communities and save lives."

"It's heartbreaking to wake up to another mass shooting — this one at a nightclub in California," said New Jersey Rep. Donald Payne Jr. "This is horrific! Dems have the House in January, and we are ready to take action to [end gun violence]."

Florida Rep. Ted Deutch, a Democrat, said his party "will take up comprehensive, nation-wide reforms, but we can’t make our communities safer if we don’t do this together."

"We need both parties to recognize that this shouldn’t be normal," Deutch said.

"Heartbreaking to hear about what happened in Thousand Oaks last night. Sickened that this keeps [happening]. Our love, support, thoughts and prayers aren’t enough," said Rep. Pramila Jayapal, D-Wash. "We need to act now [and] break the vicious cycle of gun violence & mass shootings that plague our country."

Rep. Don Beyer, D-Va., said called on Congress to "act" as "our hearts go to the victims, their families and first responders."

California Sen. Kamala Harris, widely seen as a potential 2020 presidential contender, said she's praying for those injured in the shooting and for those who have lost loved ones. She called Helus "a true hero."

"Leaders in Congress must act — not someday, but now," Harris said.

"My heart breaks for the victims and families of the senseless violence in Ventura County, Calif., including Sheriff’s Sergeant Ron Helus, said GOP Sen. Johnny Isakson of Georgia. "We pray for them as we thank and pray for the heroes of law enforcement and first responders who rush to protect innocent lives."

Still, other lawmakers took to social media to express their condolences and call on Congress to address gun violence: