What to know about the California bar shooting and the gunman, Ian David Long

A 28-year-old man, identified by police as Ian David Long, was dressed all in black when he tossed a smoke device into a packed California country dance bar and, amid the ensuing confusion, sprayed rounds from a .45-caliber handgun into a crowd filled with college students, killing 12 people Wednesday night before apparently committing suicide.

Officers at the scene in Thousand Oaks, Calif., found the former Marine dead of a gunshot wound in an office inside the bar.

Ventura County Sheriff Geoff Dean said authorities had "several contacts" with Long in recent years, typically for what he described as "minor" incidents. Dean did say, however, Long may have suffered from Post-Traumatic Stress Disorder.

As Long shot his way into Borderline Bar & Grill on Wednesday night, witnesses said some patrons jumped out of second-floor windows, others used furniture to smash makeshift escape routes and several more people hid in an attic.

Here’s what we know about the gunman so far.

Ian David Long, of Newbury Park, was identified as the shooter by police during a Thursday news conference. Authorities revealed Long had a history of interactions with law enforcement officers.

Among the incidents, which spanned multiple years, Long was involved in a minor traffic collision, was a victim of a battery at a local bar in 2015 and, in April, deputies were called to his house for a "subject disturbing."

"[Police] went to the house. They talked to him. He was somewhat irate, acting a little irrationally," Dean said, adding a mental health specialist was called to the scene and later cleared Long, who officers declined to arrest. "He was left at that scene last April."

At that time, given Long was a military veteran, some officers expressed concern he may have been suffering from PTSD, Dean said, though he didn't elaborate on whether PTSD was being investigated as a driving force behind Wednesday's slaughter.

Long served in the Marine Corps from August 2008 through March 2013, when officials say he was honorably discharged. He was a corporal with a specialty as a machine gunner, earning nearly a dozen medals during his service, which included time in Afghanistan, the United States Marine Corps (USMC) confirmed in a statement to Fox News.

"The Marine Corps extends its deepest condolences to the families of the victims in this senseless tragedy," USMC said. 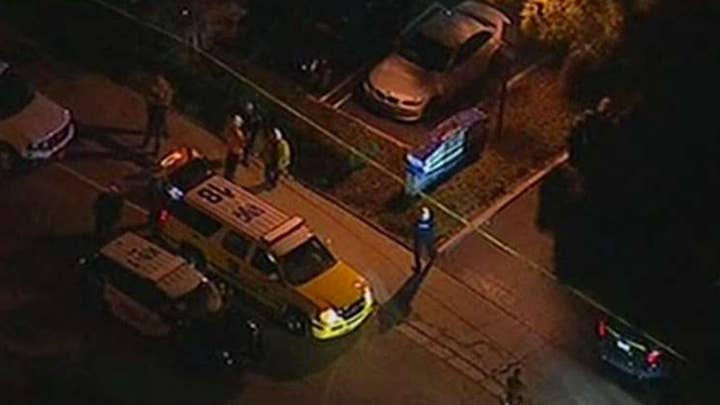 Long reportedly didn't say a word as he walked into the bar, which was crammed with college students, before he tossed a smoke device and then began firing a Glock .45-caliber handgun -- that sported an illegal modification.

In California, the handgun is designed to hold 10 rounds and an additional round in the chamber, though Dean noted this particular weapon, which Long purchased legally, had an illegal extended magazine on it. It's unclear how many rounds were actually in the weapon or how many rounds the magazine could hold.

Teylor Whittler, 19, was on the dancefloor when Long opened fire. She told "FOX & Friends" Thursday the shooter was wearing black clothes, a black baseball cap and a ski mask-type item partially covering his face.

“Those shots, you don’t mistake that for anything."

He “knew what he was doing," Whittler, the daughter of a military veteran, said. She said it was clear the gunman had experience using weapons.

"He had two [magazines] that I know with him. He changed them within about six seconds, which was really fast. So he knew what he was doing.  And he also had perfect form. When I looked back, he was like spot on," Whittler said.

Another witness, 20-year-old Matthew Wennerstrom — who described himself as a "regular" at the establishment — told the Los Angeles Times the shooter was "tall." As Wennerstrom fled the horror, he spotted the man about 35 feet away, holding a gun.

“Those shots, you don’t mistake that for anything,” Wennerstrom said, noting he saw the gunman fire at people standing at the front desk before he jumped out of a window to safety.

Authorities have not yet revealed a motive in the mass shooting.

"We have no idea what the motive was at this point," Dean said at a news conference.

John Hedge, who was standing near the front entrance of Borderline Bar & Grill, told KABC he saw the gunman throw smoke devices into the front of the bar before he shot a security guard outside.

"He was down. The gunman was throwing smoke grenades all over the place. I saw him point to the back of the cash register...and he just kept firing. I ran out the front door," he told the news station.

Hedge's stepfather told KABC he saw the man shoot the cashier — a "young girl" — before he turned to the right and headed inside an office.

"We don't have any other details to confirm an exact chronology about what happened," Dean added.

Deputies have secured Long's Newbury Park home and are awaiting a search warrant to enter and continue their investigation.