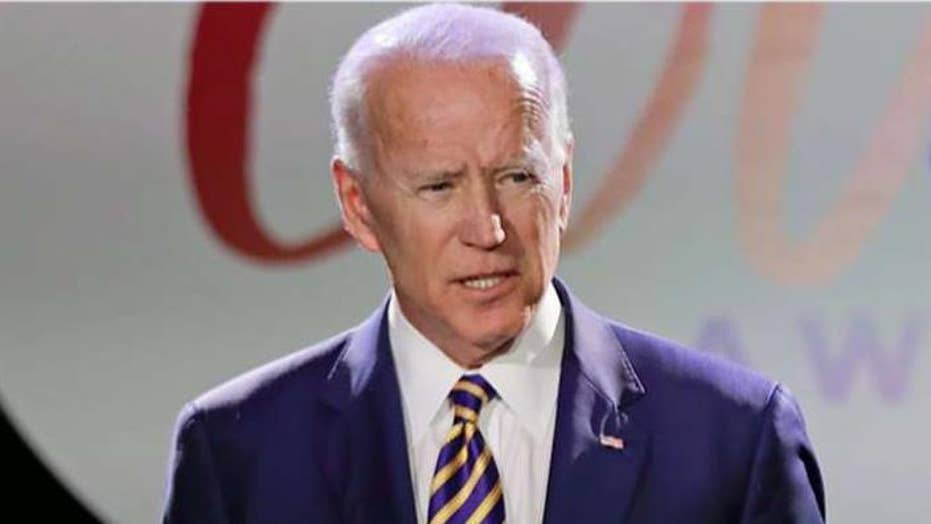 Meanwhile, one of the California Democrat delegates at the convention told Fox News that the party's Resolutions Committee had substantially altered his proposed resolution without his consent, then passed it under his name without seeking his permission. Mandel had co-authored a resolution indirectly linking Israel to white supremacist violence, including anti-Semitic attacks.

He slammed the party leadership's actions as a "creative perversion of the process" and an "outrage," and vowed to pursue all his options. News about Mandel's resolution had caused some headaches for California Democrats even before the convention began, as the party has wrestled with bipartisan accusations of anti-Semitism against high-profile Democrats.

But the drama largely centered on a figure who was thousands of miles away. (With the exception of the episode Saturday in which an activist who suddenly rushed the stage and grabbed the microphone from California Democrat Sen. Kamala Harris, only to be immediately confronted by security and staff.)

"Some say if we all just calm down, the Republicans will come to their senses," Massachusetts Democrat Sen. Elizabeth Warren said in a clear reference to Biden's comments that the GOP may have an "epiphany" after President Trump is gone.

"But our country is in a crisis. The time for small ideas is over," Warren said.

Warren was one of 14 presidential contenders in San Francisco for the three-day meeting of the California Democratic Party, featuring thousands of fervent activists. Biden was the only big-name candidate to skip the gathering, opting instead to campaign in Ohio. That allowed Warren, Vermont Sen. Bernie Sanders, Harris and others a chance to grab the spotlight.

California has shifted its 2020 primary earlier on the calendar, to March 3, part of the Super Tuesday collection of contests, in hopes of giving the state more sway in choosing the party's nominee. California will offer the largest delegate haul, but it is a notoriously difficult state to campaign in, given its massive size and expensive media markets.

Biden, speaking to thousands of activists at the Human Rights Campaign's Ohio gala Saturday night in Columbus, didn't mention his rivals but blasted Trump and his record on LGBTQ issues.

Some conservative commentators and activists questioned whether Biden was intentionally avoiding the spotlight, trying to maintain his lead without appearing to conflict with his Democrat rivals.

For example, Colorado Gov. John Hickenlooper took a different tack, eliciting loud boos in a viral video moment when he declared "socialism is not the answer" to enacting progressive policies and beating Trump. Hickenlooper quickly highlighted the negative reaction on his Twitter account: "I know this message won't be popular with everyone in our party. But the stakes are too high. We cannot hand this election to Donald Trump."

Biden, for the most part, has avoided directly addressing his stance on a range of hot-button issues important to the growing progressive wing of the Democrat Party, including the appeal of socialism and the Green New Deal.

"I hope a reporter or debate moderator remembers to ask Biden about this when he leaves the witness protection program," Arthur Schwartz, a conservative consultant close to the Trump family, wrote on Twitter.

In San Francisco, Warren's remarks served as the most direct jab at Biden, but 37-year-old South Bend, Ind., Mayor Pete Buttigieg seemed to draw a contrast with the 76-year-old Biden when he said Democrats won't win if they bring more of the same to the 2020 contest.

"The riskiest thing we can do is play it safe," Buttigieg declared. "There's no going back to normal."

Democrat Rep. Eric Swalwell, a Californian who remains at the bottom of the pack in all major polls, also referenced Biden as he said "we don't need a crime bill — we need a hope bill." Biden has taken heat from some rivals for his support of a crime bill in the early 1990s that critics say spurred mass incarceration.

One of those rivals is Harris, though she made no direct or indirect references to Biden during her Saturday morning speech, instead highlighting her policy plans and bringing the crowd to its feet with calls to begin impeachment proceedings against Trump.

"The riskiest thing we can do is play it safe. There's no going back to normal."

Harris received the prime spot of speaking first Saturday and sought to flex her home-state muscle by referencing her near-decade as a statewide elected official. Her campaign even emblazoned the official convention lanyards that thousands of Democrats wore all weekend with Harris' name.

KAMALA HARRIS' PRESIDENTIAL BID SEEMS TO FADE, AS OTHER CANDIDATES SURPASS HER NUMBERS

"The thing I love about California Democrats is we are never afraid of a fight," she said. "And we know right now we've got a fight on our hands."

Warren and New Jersey Sen. Cory Booker received perhaps the most enthusiastic response from the crowd, drawing people to their feet on multiple occasions. Warren reprised her "I've got a plan for that" slogan to raucous cheers as she pledged bold action on a variety of topics, including breaking up "big tech," a strong rebuke in the home of Silicon Valley.

Booker was the only candidate to reference Friday's fatal shooting in Virginia Beach, Va., which left 12 people dead. Declaring he'd have plenty of time to talk about himself, he told the party that the election is about more than finding a "savior" and simply beating Trump.

Most candidates sought to bring California-specific elements into their speeches or burnish their liberal credentials. Former Texas Rep. Beto O'Rourke slipped seamlessly between Spanish and English, a key move in a state with a large Hispanic population, while Washington Gov. Jay Inslee highlighted his fight to raise the minimum wage and enact aggressive policies to fight climate change.

Fox News' Lukas Milekonis and The Associated Press contributed to this report.