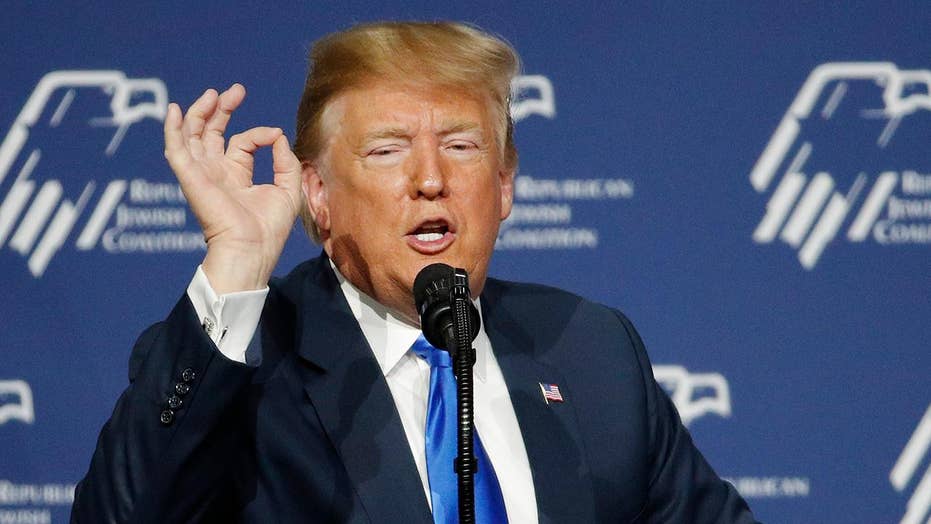 A draft resolution set to be debated this weekend at the California Democratic Party State Convention, obtained by Fox News, accuses the Israeli government of willfully "aligning with the virulent Islamophobia" of white supremacist groups in the U.S. -- and links Israel indirectly to the Oct. 2018 massacre of 11 congregants at a Pittsburgh synagogue.

The resolution could prompt a dramatic floor debate at the convention if the party's Resolutions Committee decides to table it, Fox News is told, as prominent national Democrats have wrestled with high-profile allegations of anti-Semitism in their ranks in recent months. Minnesota Rep. Ilhan Omar and Michigan Rep. Rashida Tlaib, in particular, have faced scrutiny from their own party for comments widely perceived to be anti-Semitic. In March, the House passed a bipartisan resolution condemning various forms of bigotry in response.

The document was one of a slew of secretive, unpublished proposals obtained by Fox News that are slated for debate beginning Friday morning. A total of 14 Democrat presidential contenders are set to descend on the San Francisco gathering at the Moscone Convention Center, including Elizabeth Warren, Kamala Harris, and Bernie Sanders.

Some of the draft resolutions would mandate that Democrat officials work to "nullify" President Trump's pro-Israel policies. One document directs party officials to take a subsidized trip to Israel only "if they undertake to devote an equal amount of time to visiting Palestinian towns, villages and refugee camps in Israel and the occupied Palestinian territories."

Tentatively titled "Commending the House for resolving to fight all racism and bigotry and for resisting the false conflation of support for Palestinian rights with antisemitism," the resolution blasting Israel's purported role in furthering white supremacy was co-authored by David Mandel, an elected state Assembly delegate and progressive attorney who says he holds dual U.S.-Israel citizenship and lived in Israel for 10 years.

A makeshift memorial stands outside the Tree of Life Synagogue in the aftermath of a deadly shooting in Pittsburgh, Pennsylvania, on Oct. 29, 2018. Matt Rourke / AP

The document calls the October synagogue shooting "the culmination of an alarming re-emergence of virulent antisemitism that is a core element of historical and currently resurgent white supremacism in the United States and around the world." The "Israeli government, along with some of its U.S. backers," the resolution continues, "welcomed support from Christian fundamentalist and ultra-right groups in the United States and abroad, dangerously ignoring their deeply rooted antisemitism while aligning with their virulent Islamophobia."

Speaking to Fox News, Mandel said it would be "far-fetched" to say that the resolution "directly" blames Israel for violence against Jews. But, he suggested, Israel officials did bear some indirect responsibility for both anti-Semitic and Islamophobic violence.

"The Israeli government and its supporters here seem to be embracing the right-wing and not caring what they say about anything else -- Islamophobia, dog whistles for anti-Semitism," Mandel said. "That, I think, does indirectly lead to some of the violence."

Mandel added: "What we're saying is the Israeli government is aligning itself with right-wing governments around the world, including in this country, and those right-wing groups -- a core tenet of their ideology is antisemitism."

The resolution, like several others, will quickly go before a Resolutions Committee, which largely has control of which resolutions are adopted and debated.

"Most of the 3,000 or 4,000 delegates at the convention will agree with us," Mandel said, "but that doesn't mean we're going to succeed in passing the resolution."

Protesters gather for the 59th straight Friday on the border; Trey Yingst reports from the scene.

Mandel noted that many delegates had not yet seen the specific text of his resolutions, although approximately 200 delegates in total have already endorsed several that he will propose. He said Chris Yatooma, Kari Khoury, Yassar Dahbour, Iyad Afalqa, and Murad Sarama also helped write some of the resolutions in a "team effort."

Delegates additionally have the option of quickly gathering 300 signatures to force a debate on the floor, even if the Resolutions Committee tries to quash the resolutions.

ON THE GROUND IN ILHAN OMAR'S DISTRICT: GANGS, DISTRUST IN POLICE FESTER

"We may do that," Mandel told Fox News, noting that a "more conservative establishment" is dominant on the Resolutions Committee, even as a more progressive wing is insurgent in the party. In 2017, Mandel hastily negotiated with the Resolutions Committee to secure passage of an unprecedented resolution condemning what it characterized as the U.S. support for Israeli "occupation of the Palestinian lands," and opposing crackdowns on economic boycotts of Israel.

Mandel's new resolution praises House Democrats for passing the broad resolution opposing bigotry. And, in an apparent reference to Omar, the resolution adds that the "California Democratic Party opposes all efforts to stigmatize and suppress support for Palestinian human rights by falsely conflating it with antisemitism, whether in the unfounded attacks and even death threats against Democratic members of Congress or in the widespread efforts to shut down discussion and intimidate students on campuses around the country."

Party officials said they would not discuss the private documents. "We won’t be commenting on resolutions that have not yet been finalized, debated or adopted," California Democratic Party spokesman Roger Salazar told Fox News.

A "full, balanced understanding of the situation is crucial for officials responsible for shaping U.S. policy in the region or who might have such responsibilities in the future," the resolution states. "The government of Israel and U.S. organizations that support it frequently invite members of Congress, state legislators and other public officials to tour Israel on subsidized trips that are clearly – and often admittedly -- meant to cultivate sympathy for its policies, imparting only a partial view of the situation in Israel/Palestine."

Another resolution, apparently drafted in part by a San Francisco-based progressive attorney, lamented the "untenable status quo – rocket firings into Israel from Gaza, regular air and artillery bombardment of Gaza neighborhoods, and sniper shootings of unarmed civilians at the fence, with hundreds of Palestinians killed and thousands wounded since March 2018."

The document "urges Congress and the administration to demand that Israel and Egypt end their blockade of the Gaza Strip in favor of immediate international involvement to restore a semblance of normal life for the area’s 2 million Palestinians while ensuring the security of all parties and advancing toward a political settlement in the region."

"We need to pay more attention to this phenomoneon," Mandel said, referring to the rise of white supremacy and its supporters domestically and abroad. "It's bigger than we thought."

Other resolutions set to be debated at the convention, which will conclude on Sunday, include some condemning U.S. policy in Venezuela, as well as proposals on a host of domestic issues.