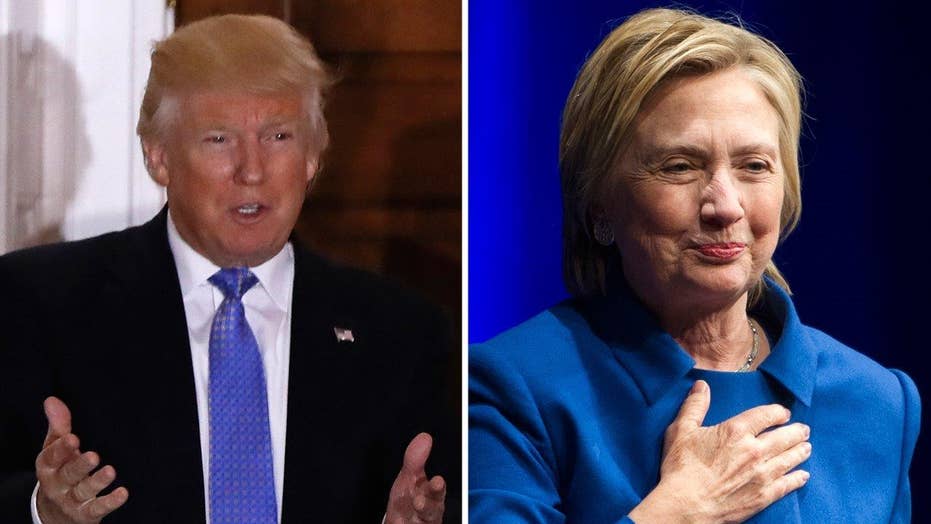 The president-elect admitted pressing charges against Hillary would be divisive for the country; Peter Doocy has the details for 'Special Report'

The Republicans had just wrapped their convention in Cleveland in late-July. Political observers regarded the conclave as a strange affair. Many often-present Republican loyalists skipped the show.

President-elect Trump appeared on stage late on the convention’s first night. After that, thousands filed out of the arena long before Sen. Joni Ernst, R-Iowa, and Montana Rep. Ryan Zinke, a Montana Republican set to become Interior secretary, presented the evening’s valedictory.

Trump’s pick for National Security sdviser, retired-Gen. Michael Flynn delivered a protracted, indictment of Hillary Clinton late the next night. Much of the throng vacated the building due to the hour and the meandering nature of Flynn’s speech.

Political conventions are typically tightly stage-managed affairs with every detail scrutinized and timed-out to the second.

Not Trump’s convention in Cleveland.

And the argument was that this was wasn’t your usual political convention.

This was how President-elect Trump does things.

He shoots from the hip. Says what he thinks. That produced various insults directed toward women, minorities and religious groups. He makes brash pronouncements. And yet, it all worked for the president-elect. He defied political handicappers and longtime political observers. In the 2016 maelstrom, Mr. Trump emerged victorious.

It may seem bizarre, but chaos sometimes wins, as I wrote in July.

In professional sports, there were few greater contrasts than the 1970s’ “Big Red Machine” and the “Swingin’ A’s” in Major League Baseball.

But the Reds were “squares.” The Reds’ owners forbade facial hair on players. They required that players wear only black cleats. Their home uniforms were almost all white except for the Reds wishbone “C” logo and red piping around the belt. The Reds donned thick, all red stirrup socks to cover their eggshell white sanitary hose underneath.

Order and discipline worked for the Reds.

Yet  the Reds lost the 1972 World Series to the upstart Oakland Athletics.

And then the A’s won two more consecutive World Series, defeating the New York Mets in 1973 and the Los Angeles Dodgers in 1974.

The Reds never made it back to the World Series until 1975. They finally won back-to-back titles over the Boston Red Sox in ‘75 and swept the New York Yankees in 1976.

But the Reds captured only two world crowns in the 1970s, despite their sound, fundamental baseball.

Compare this to the trifecta of titles brought home by Oakland in the same decade.

In July, following the GOP convention, this is what I wrote about the Athletics:

“The A’s were everything the Reds weren’t. They were mayhem in uniforms. The Athletics featured a ragtag gang of players which was talented, but far short of Cincinnati’s team. Oakland was more colorful. Consider the names alone on the pitching staff: “Blue Moon” Odom. “Catfish” Hunter. Vida Blue. Rollie Fingers.

“While the Reds banned mustaches, Athletics’ owner Charlie Finley awarded bounties to players who grew them. Fingers best exemplified the A’s, maintaining a handlebar mustache for much of his career. In fact, some dubbed the ’72 World Series between the Reds as the ‘Hairs versus Squares.’ ”

Oakland’s players not only took it to their rivals on the diamond. Contretemps often erupted in the clubhouse. Odom and Fingers fought during a workout in the middle of the 1974 World Series. No matter.

The A’s defeated the Dodgers four games to one. Jackson and North got up in each other’s grill and duked it out in the visitors’ clubhouse at Tiger Stadium during a 1974 series against Detroit. But that was hardly a blip on the A’s radar. They left their family problems under the stands and promptly caged the Tigers 9-1.

The Reds may have been better overall. But Oakland secured more titles. It’s hard to argue with success.

Yes, Hillary Clinton, the 2016 Democratic presidential nominee, may have done everything by the book. She didn’t offend Muslims and make fun of disabled persons. But Clinton didn’t win.

2016 was a chaotic political year. There was infighting. A fracas here. A smear there. Charges and countercharges. The tumult was palpable.

Clinton captured the popular vote. But she fumbled the Electoral College. The Democrats “Blue Wall” in the upper Midwest cracked.

Now, another wall may be on the way.

Clinton may have done many of the “right” things. But it wasn’t enough. Kind of like the 1972 Reds against the A’s in that year’s Fall Classic.

Sure, the Reds found glory later. They didn’t deviate from their game plan in 1973 or 1974. But those seasons weren’t kind to Cincinnati. The Reds imploded in the 1973 National League Championship Series (NLCS) to a clearly inferior New York Mets team.

Then the loaded Reds completely missed the playoffs in 1974.

But Cincinnati was nearly unbeatable in 1975, racking up a stunning 108 victories. The 1976 team didn’t lose once in the postseason, sweeping the Philadelphia Phillies in the NLCS and then blanking the Yankees four-love in the World Series.

But chaos and rule breaking sometimes wins. It did for Oakland. Not just once. But three consecutive times. And the Reds, despite their laurels, never came close to earning that third title in the 1970s.

So the question posed between the Republican and Democratic conventions was whether it would be a tumultuous year or a conventional year.

Would it be a Trump year or a Clinton year?

And it turned out to be an Oakland A’s kind of year.