Tucker: Fauci lied about the Wuhan lab for more than a year

'Tucker Carlson Tonight' reacts to report COVID-19 could have originated in a Wuhan lab, a theory Tucker Carlson has been investigating on his show for month

Actually, it looks like this virus did come from a lab in China. Nearly a year and a half into the pandemic, that’s the new consensus in the American media. Boy, these things change fast. There are holdouts of course. Just today, over at the Washington Post, a China shill called Michael Gerson wrote a hilariously overwrought column entitled:

"The right is dwelling on slanderous myths about the origins of COVID-19." The radical right! Slanderous myths! Russian QAnon sleeper cells slandering the Chinese government! It’s pretty funny. The good news is, it’s almost over. You’re probably not going to see a lot more columns like that going forward. The nonsense is finally dying down.

At other parts of Michael Gerson’s own newspaper, we’ve learned, they’re working on new stories about how the virus did in fact escape from the lab in Wuhan. So, the debate among serious people over the origins of COVID appears to be pretty much winding up. Pretty much every sane person acknowledges at this point that the government of China likely caused the single worst man-made disaster in human history. As if we need more evidence, over the weekend, the Wall Street Journal reported that the first people infected with COVID-19 were probably researchers at the Wuhan Institute of Virology. In November of 2019, three of them were taken to the hospital with symptoms. The Journal did solid reporting, but it wasn’t entirely new. Back in January of this year, the State Department issued a fact sheet telling the entire country the same thing.

They said the first COVID patients were not hungry patrons of the local wet market, reckless diners who gorged themselves on pangolin and bats. No, they weren’t. The first patients were researchers at the Wuhan Institute of Virology. Clearly, they’d been infected at work, while working on the virus. If you were trying to understand where COVID came from, and you should be if you want to prevent future pandemics, that State Department in January told you a lot. Yet it was ignored.

In fact on Monday, Tony Fauci himself — the man in charge of our whole response to COVID-19 — told CBS News that he never even heard about the State Department’s findings on the Wuhan lab. He had no idea.

In other words, Fauci’s own employers, the U.S. government, publicly released compelling evidence that the virus that he has devoted his life to fighting, did not come food, but instead escaped from the very bio lab that Tony Fauci has sent American tax dollars to fund. 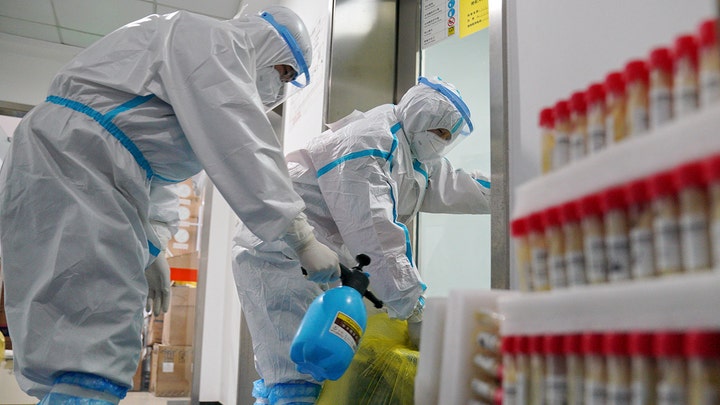 Yet somehow Tony Fauci didn’t know this. He didn’t know it till he read this weekend’s Wall Street Journal. It was news to him. Bolt from the sky. Totally new information.

Can we really believe that? No, of course, we can’t. In fact, we have heard that on or about November 19, 2019, right around the time those Chinese researchers became the world’s first COVID patients, the government of Thailand contacted the CDC and Tony Fauci’s office to say its intelligence service had picked up "biological anomalies" around the lab in Wuhan. In other words, there had been a leak.

We can’t confirm this, though we believe it to be true. We do know that several other allied foreign governments, including the governments of France and Australia, have gathered evidence showing the virus escaped from a Chinese lab. Yet Tony Fauci, who runs the whole thing, didn’t know any of this? Come on. Of course he did.

Fauci has known from the beginning the virus may very well have come from that lab. Many people have known that. Fauci just lied about it for more than a year.  In May of 2020, in an interview with the willing dupes at National Geographic, he told you that, as one of the world’s most eminent scientists, there’s really no chance COVID-19 was engineered by human hands.

FAUCI:  If you look at the evolution of the virus in bats and what exists now, it’s very, very strongly leaning towards that could not have been artificially or deliberately manipulated. The way the mutations have naturally evolved. A number of very qualified evolutionary biologists have said that everything about the stepwise evolution over time strongly indicates that it evolved in the wild, then jumped species.

"A number of very qualified evolutionary biologists." Really? Where are those scientists today? Is there, for example, a single working virologist on planet earth who’d come on this show right now and dismiss the Wuhan lab leak idea out of hand as ridiculous — or quote "outrageous," as Francis Collins of the NIH once did?

We doubt there’s a single working virologist who would dare to do that. But not so long ago, the entire scientific and public health establishments did that very thing. So, what’s changed? Not the science. The science remains precisely the same. Only the politics have changed.

And that gets you thinking. Now that we know what we know about the Wuhan lab — and we know that, of course, Fauci has known it too for a very long time, how could he not — it’s pretty remarkable to go back and look at Fauci’s public statements about COVID and the government of China.

Keep in mind, he knew that it was at least possible that this virus came from that Wuhan Lab. Yet he did this interview with our David Asman with Fox Business in January of 2020. Keep in mind that Tony Fauci was perfectly aware that China may have created this virus, and he knew for a fact that the government of China was lying, covering its tracks, and pushing the world health organization to do the same. Imperiling the entire planet as they did that. Tony Fauci did that, yet he said this anyway:

DAVID ASMAN: Dr. Fauci - China has been known to fiddle with their stats before. Do you trust what they are telling us about this illness?

FAUCI: From what I can see they really are being much more transparent.

You read that, you look back over the last year in light of what we now know, and you ask yourself, how does Tony Fauci still have a job? Seriously. What kind of country gives this much power to someone who’s proven himself to be serially dishonest and incompetent? It’s scary we’d allow that. Especially in public health. Meanwhile, and this is the most galling part, those few journalists and scientists who told the truth about what happened in Wuhan were punished for telling the truth. They were attacked by CNN, censored by Facebook, denounced by their colleagues. They were destroyed in some cases. Where’s their apology? Who’s paying into their reparations fund? No one of course.

Here’s someone who deserves to be rehabilitated immediately. His name is Professor Stephen Mosher. He’s an expert on China and a very brave person. You’d need to be to say what he said in February of 2020, back when mass lockdowns seemed like something they only did in China, Mosher came on this show and told the truth:

MOSHER: Well, I think it escaped from the lab because we have the Chinese government basically telling us that it did…Wuhan is the only level four laboratory in all of China. So that's where you would put a dangerous pathogen, whether you were genetically engineering it to be a weapon or not, that's where you would be experimenting on it. So it makes sense that the epicenter of the epidemic, that the lab there would be the source of that virus.

So you read that, and you think that guy was on to something. He was smart, he was honest, he connected the dots. For his trouble, for telling the truth, Steven Mosher was immediately denounced as a conspiracy nut. Meanwhile, the liars and China's shills got richer and more powerful.

The WHO, which followed China’s instructions and told the world that COVID wasn’t really transmissible by air, now has the full support of the Biden administration. In fact, Joe Biden rejoined the WHO, with no conditions. This is despite the fact American intelligence can prove that the WHO lied, and people died as a result of those lies. Even as of now, the U.S. government has not launched any broad and serious investigation into where the coronavirus came from. If you can imagine.

At the same time, they’re telling us we need a 9/11-style commission to understand every facet of the January 6th events at the capitol. But the pandemic that killed three million people and destroyed the west? Which it has. Never mind. We’ll let someone else figure it out.

This article is adapted from Tucker Carlson's opening commentary on the May 24, 2021, edition of "Tucker Carlson Tonight."