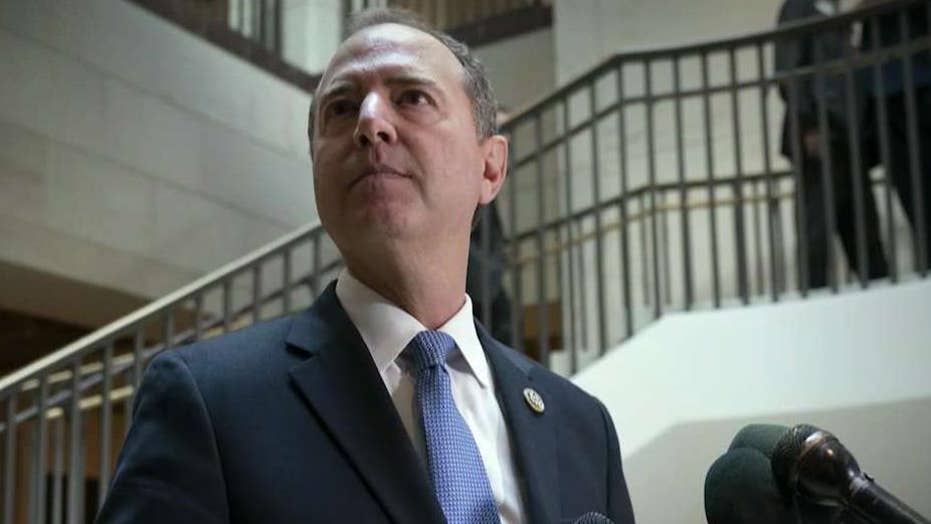 Democratic lawmakers and the White House are at odds over a whistleblower complaint of an alleged promise by President Trump to a foreign leader; chief intelligence correspondent Catherine Herridge reports from Washington.

As President Trump faces media scrutiny over a phone call he held with Ukraine President Volodymyr Zelenskiy, Rep. Adam Schiff, D-Calif., said he may seek to withhold funds from the intelligence community unless they disclose the full contents of the conversation.

Schiff, who serves as the House Intel Committee chairman, appeared on CNN's "State of the Union" Sunday, where host Jake Tapper asked if Schiff would be willing to put the nation at risk to get to the bottom of the cryptic report.

"It depends on what funds we withhold," Schiff replied. "In this case, you have the office of the director of national intelligence that is withholding this complaint in violation of the clear letter of the law... And there are funding requests that that office makes that don’t go directly to national security that we can withhold."

The story was first reported by the Washington Post as a whistleblower claim about Trump making some type of "promise" to a foreign leader, which may have been of a nefarious nature. Further reporting claimed the conversation was linked to Ukraine, and Trump's request for their government to look into 2020 presidential hopeful Joe Biden's son and his business dealings.

"Look, it is a blunt remedy and one that I’m very reluctant to use," Schiff continued. "At the same time, the inspector general has said this is not only serious...but it's urgent. We cannot afford to play rope-a-dope in the court for weeks or months on end. We need an answer."

Schiff also reignited the impeachment debate which seemed to be fading away, after several failed attempts by House lawmakers to oust the president from office.

"If there is a fire burning, it needs to be put out. And that's why we’re going to have to look at every remedy. And if these two issues are, in fact, one issue and it relates to deplorable conduct, a violation of the president’s oath of office... then we're going to have to consider impeachment as well," he said.

Trump responded to the story on Twitter Thursday and again on Saturday, saying the narrative was "fake news" conjured up by biased members of the media.

TRUMP: CONVERSATION WITH UKRANIAN PRESIDENT 'WAS ABSOLUTELY PERFECT,' TOUCHED ON CORRUPTION, OTHER ISSUES

"Now that the Democrats and the Fake News Media have gone 'bust' on every other of their Witch Hunt schemes, they are trying to start one just as ridiculous as the others, call it the Ukraine Witch Hunt, while at the same time trying to protect Sleepy Joe Biden. Will fail again!" he wrote on Saturday.

Trump also responded to the story while speaking to reporters outside the White House Sunday morning, and claimed he did nothing wrong.

“I said absolutely nothing wrong; it was perfect,” Trump said. “There was no quid pro quo, there was nothing,” he later added.