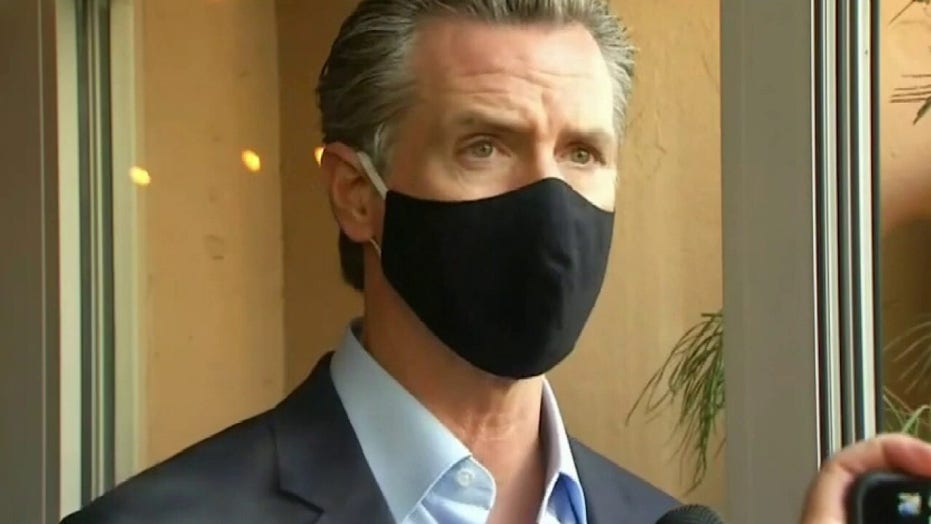 Newsom's recall fundraising email asks constituents: Give me a chance

California governor to face special election; reaction from 'The Five'

The Los Angeles Times editorial board complained Monday that the recall election to determine if Gov. Gavin Newsom, D., should be removed from office is an undemocratic "calamity."

The effort to recall Newsom has received the necessary number of verified signatures to trigger a recall election later this year, infuriating the left-leaning board that has deemed it an expensive waste of time and a subversion of the will of the voters.

"This was no surprise, since the recall organizers submitted 2.1 million signatures for a safe buffer against bogus signers," the board wrote. "Nevertheless, now that the hypothetical has become reality, it’s starting to sink in that California is about to suffer through a long seven months of recall-related campaigning as this calamity unfolds."

"This recall never should have happened — and probably wouldn’t have gone forward at any other time," it added.

The board argued the recall effort by right-wing activists was illegitimate since it began before the coronavirus pandemic began and was initially targeted at Newsom for governing as he campaigned as a left-wing Democrat. However, Newsom has drawn criticism for flouting his own coronavirus guidelines, as well as driving businesses and citizens out of the state.

ARNOLD SCHWARZENEGGER WEIGHS IN ON THE CALIFORNIA RECALL

The state's last recall election occurred in 2003, when Democrat Gray Davis was removed and replaced in the special election by Republican movie star Arnold Schwarzenegger. Another celebrity is in the mix in 2021: former Olympian, and perhaps the world's most famous transgender woman, Caitlyn Jenner.

"I think the voters have finally woken up here. ... I do believe that the voters, when presented with a realistic alternative ... they're going to decide that's the way to go," Cox told Fox News earlier this month. "The insiders like Gavin Newsom have run this state down, and it's time that the people decide what's going to happen."

"The recall election might be good for the careers of a few candidates, but it won’t be great for Californians, who will have to endure what is likely to be months of invective, silliness and contentious debate in a year when they were supposed to get a break from all that," the board wrote, calling it a "political circus."

The recall phase has now entered a 30-day period when signatories can withdraw their names from the petition and potentially stop the recall. If after those 30 days the effort retains enough signatories, the Department of Finance will be given 30 days to estimate the cost of the recall election, and after that a budget committee will have 30 calendar days to review those estimates before the Lieutenant Governor sets the date for the election.

The recall might be good for some candidates, the board wrote, but not for Californians.

Newsom was elected in 2018 in a landslide, beating Cox with nearly 62 percent of the vote. A poll last month showed he is in a strong position to hold off the recall, with 56 percent of respondents saying they would keep him in office.

If the special election does occur, The recall ballot would ask voters to choose "yes" or "no" on the question of removing Newsom from office, followed by a selection of replacement candidates. More than 50% of voters would be required to vote "yes" to remove him. Then, the candidate with the most votes is elected governor.