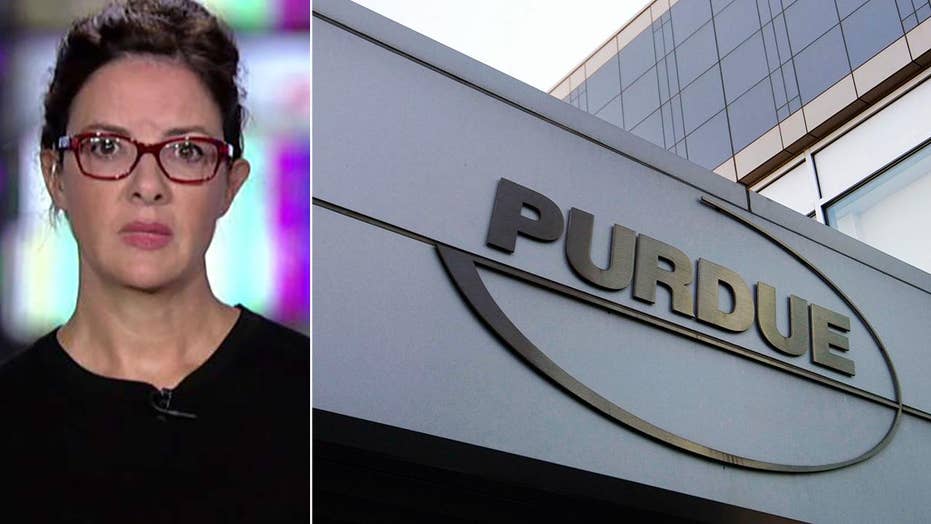 A woman who lost her sister to an opioid overdose reacts to Purdue Pharma filing for bankruptcy in a deal to resolve thousands of lawsuits connected to the opioid crisis.

The sister of an opioid overdose victim said on Tuesday that lawsuits against drug manufacturers and wholesalers accused of exacerbating the opioid epidemic give her “hope” that the truth is coming out.

“I think these lawsuits are a good thing [and] they give me hope because the truth is coming out,” Kelly O’Connor told “Fox & Friends.”

O’Connor’s sister, Jenny, died from prescription opioids at 44 years old in 2017. O’Connor authored an op-ed, “The opioid crisis: A 20-year conspiracy against patients,” to speak against Purdue Pharma’s role in exacerbating the opioid crisis.

“Americans are learning what’s happened over the past 20 years. The story is absolutely unbelievable and it's not just Purdue. It's a whole ecosystem. You've got gross negligence, this incredibly predatory behavior, but if money is coming out of these lawsuits that can be put toward patient-centered solutions, that's fantastic.

"There’s a lot of blame to go around and I take some of that myself as a family member. I wasn’t educated and I could’ve done more as well, so I’m cautiously hopeful,” O’Connor said.

O’Connor said her sister was going to talk to doctors to get pain medication and didn’t talk about it because “there is a lot of shame around this disease.”

OxyContin maker Purdue Pharma and its owners, the Sackler family, reached a tentative deal with dozens of states and thousands of local governments last week.

On Monday, the company filed for bankruptcy in New York.

PURDUE PHARMA REACHES TENTATIVE SETTLEMENT IN OPIOID LAWSUIT, BUT SOME STATES AREN'T ON BOARD

The Sackler family stands to lose billions after a litany of lawsuits claiming that their company marketed the painkiller OxyContin as non-addictive despite knowing otherwise.

“Many aren’t certified in addiction medicine. Lots of doctors can’t even prescribe the meds you need for medication-assisted treatment,” O’Connor said, pointing out one of the “root causes” to the opioid epidemic.

Starting in 2006, within six years, pharmaceutical giants pushed 76 billion oxycodone and hydrocodone pain pills in the country, which resulted in nearly 100,000 deaths, according to the Drug Enforcement Administration.