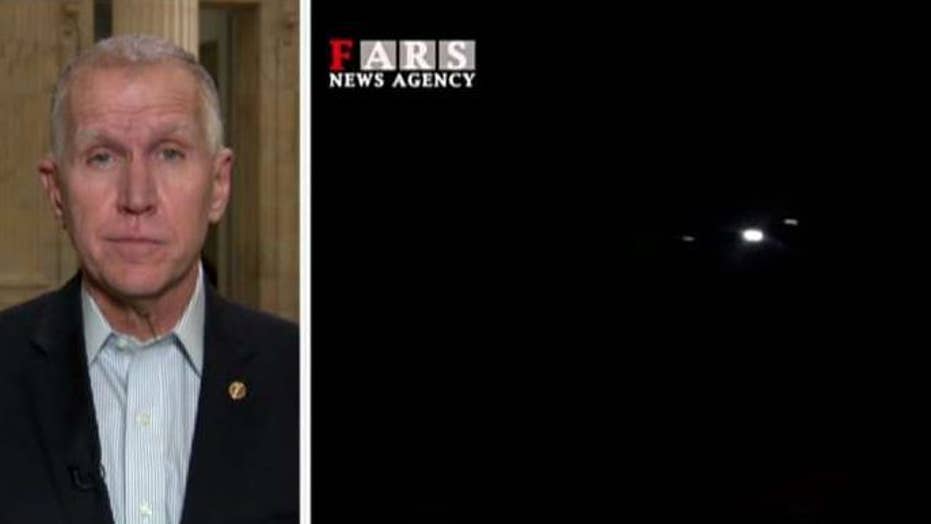 Sen. Thom Tillis, R.-N.C., said Tuesday that Iran's missile attack on two Iraqi airbases following the killing of Gen. Qassem Soleimani in a U.S. drone strike last week was “expected,” but the fact that Iran quickly claimed responsibility for the assaults was “concerning.”

The U.S. blamed Soleimani for the killing of hundreds of American troops and said he was plotting new attacks just before his death early Friday. Iran, in turn, launched more than a dozen ballistic missiles early Wednesday targeting U.S. military and coalition forces in Iraq. An American military official in Baghdad told Fox News there were "no U.S. casualties."

Tillis said that Iran had been given many passes for previous provocations but the latest attack on the U.S. embassy in Baghdad “crossed a line,” and required “consequences.”

ANDY MCCARTHY: SOLEIMANI WAS 'A LEGITIMATE TARGET' FOR DRONE STRIKE THAT KILLED HIM

“If we give them another pass like we did with maritime attacks in the Gulf of Oman and the Persian Gulf, the attacks on the Saudi oil field, the rocket attacks that killed a U.S. contractor, sooner or later, you have to say, ‘You have crossed the line and there has to be a consequence for it," the senator said. “You have to draw a line. I think the president appropriately did that when he took out Soleimani last week."

“I think the leadership of Iran, not the Iranian people, the leadership of Iran, need to apologize for decades-old attempts to harm Americans, kill Americans, hundreds of Americans,” Tillis added. “Soleimani has created a network of terror across the Middle East. He needed to be taken out. He is responsible for the attacks on the embassy. He was killed less than 15 miles away from the embassy, traveling against U.N. Sanctions. He was not there for a good purpose.”

Tillis also asserted that the American people stand behind President Trump in his decision to take out the Iranian military leader and claimed that the administration's decision to escalate economic sanctions against Iran was working.

“The economic pressure is working," Tillis said. "The [Iran] economy is failing."