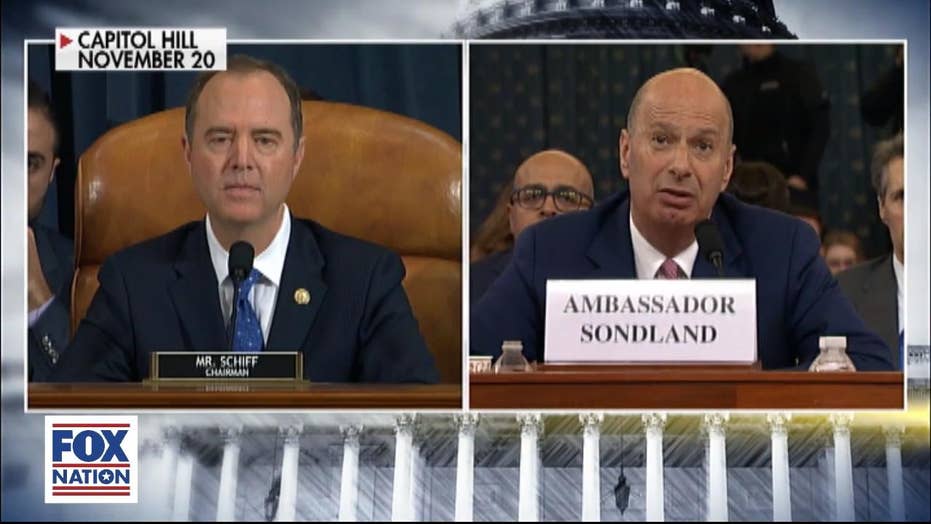 The one word that keeps coming up in impeachment hearings

Fox Nation hosts Kat Timpf and Tom Shillue compiled a montage of what seems to be the most popular word repeated throughout the impeachment proceedings as this Thursday marked the end of week two in the public testimonies.

"During week two of impeachment hearings, there sure was a lot of 'presuming,'" Shillue said in the latest episode of Fox Nation's "UNPC."

The word "presume" seemed to have been a popular choice for U.S. Ambassador to the European Union Gordon Sondland, who invoked the term in all of its forms.

"I had no idea, I was presuming that it was," Sondland said during the hearing. "That was my presumption...presumably...presuming, I was presuming," the edited video depicts him saying at various points of his testimony.

At a later point, Sondland seemed to have recognized his overuse of the word -- which he said more than 15 times during his six-hour-long hearing.

"I've said repeatedly... I was presuming," he said.

"He did say it repeatedly, that is right," Shillue joked.

Later in the episode, the Fox Nation hosts highlighted an "unexpected star" at the impeachment hearings, discussing a woman seated behind Lt. Col. Alexander Vindman as he testified at the House Intelligence Committee who caused a viral moment when she was caught on camera tilting her head back and downing a large cup of coffee.

The brunette woman in glasses, seated to the back left of Vindman, appeared to glance over at the camera before turning and continuing to chug.

Joining the Fox Nation show as a guest, Right Turn Strategies president Chris Barron said he had an easy time relating to the woman's desperate need for the caffeinated drink.

"If you watch any of the impeachment...you understand why she was chugging coffee. You had to be freebasing it just to stay awake for these boring hearings."

To see the full episode, featuring a broad range of topics including Joe Biden's marijuana announcement, and more analysis on the impeachment hearings, join Fox Nation and watch "UNPC" today.