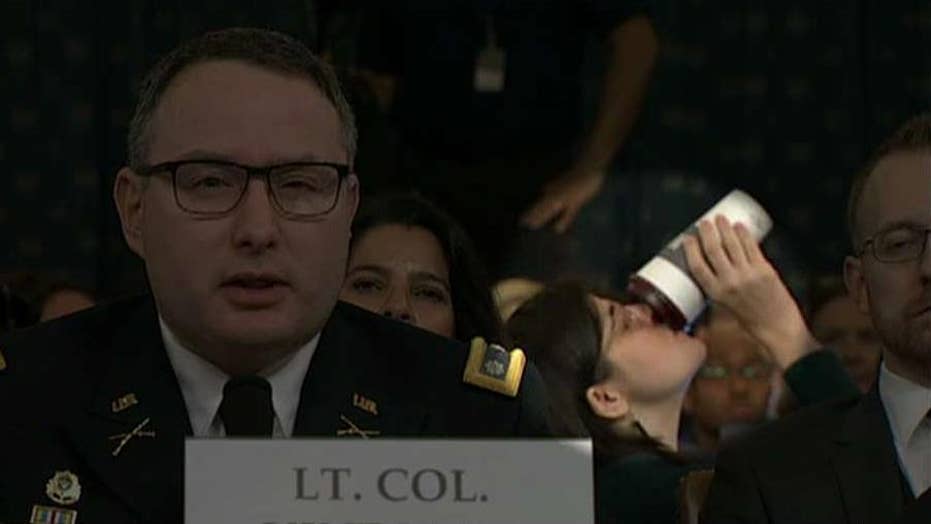 A congressional reporter becomes an overnight Internet star after being spotted chugging coffee behind Lt. Col. Alexander Vindman during his testimony on Capitol Hill.

She stirred up a “latte” laughs during Tuesday’s impeachment hearings.

A woman seated behind Lt. Col. Alexander Vindman as he testified at the House Intelligence Committee caused a viral moment when she was caught on camera tilting her head back and downing a large cup of coffee.

The brunette woman in glasses, seated to the back left of Vindman, appeared to glance over at the camera before turning and continuing to chug.

“Watching this mysterious woman chug her coffee, notice she’s on camera, and then finish chugging it is a lot more interesting than the actual testimony,” tweeted Patrick Ward.

Some folks identified the background coffee drinker as McClatchy Congress reporter Emma Dumain, and she told The Post: “Yes, I can confirm.”

Viewers found Dumain’s thirst for getting to the bottom of a cup of Joe both entertaining and relatable.

“The lady downing the coffee behind Lt Col Vindman is my hero,” one person wrote.

Vice staffer Colin Jones tweeted: “When the coffee is just that good.”

Another said: “That woman drinking coffee is all of us.”