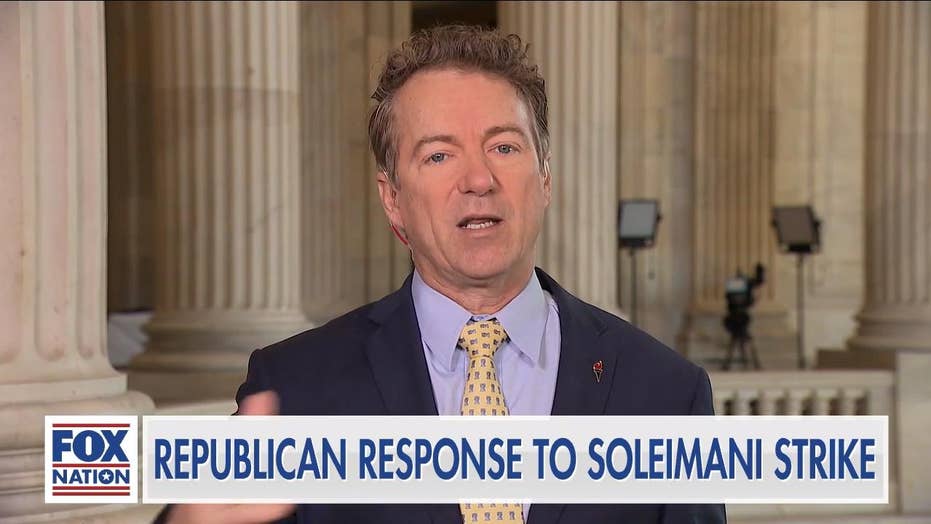 Rand Paul: Most members of Senate 'don't care about the Constitution'

Sen. Rand Paul, R-Ky., blasted his Senate colleagues on Thursday, accusing them of disregarding the U.S. Constitution, as the House gets set to vote on a resolution to restrain President Donald Trump's power to use military force against Iran without Congressional approval.

"I think that Soleimani probably was involved with targeting Americans in Iraq and other places throughout the Middle East. But at the same time, if we're to go to war with a country and kill one of their major generals, I think that is an act of war."

"For probably 70 some odd years now, we've been having a debate in our country, if not longer," Paul continued, "about who has ... the power to declare war. Our Founding Fathers ... were quite explicit that they wanted the power to be in Congress, not in the executive branch."

The House resolution, set for a vote Thursday, would assert congressional authority and rebuke Trump’s decision to take out Iran’s top general without their consent. Republican critics of the measure, which is a special type of resolution that does not require the president's signature, say it does not have the force of law.

"Is this just political?" asked the judge. "If the president were a Democrat, would Republicans then vote in favor of returning war-making back to the Congress?"

"No," said Paul. "Most of them don't care about the Constitution. And so it's not strictly partisan."

"Most of my Republican colleagues are neoconservatives," he went on. "Most of them also believe in this bizarre, unfounded theory. They call it the 'unitary theory of the commander in chief' and they say that he has unlimited Article II authority."

Article II, section 2 of the Constitution names the president as the commander in chief of U.S. armed forces.

"They say presidents can do whatever they want," argued Paul, "and the only way we can stop it is to stop funding a war. But as you know, that's very difficult."

The Trump administration has argued that the 2002 Authorization for Use of Military Force, which was passed by Congress in the aftermath of 9/11 and in the run-up to the Iraq War, provided the specific legal basis for the president's authority.

"Both parties are at fault here," concluded Paul. "It isn't just Republicans. President Obama usurped the war powers. Bush did it. Truman, LBJ, you name it. It's hard to find a president who hasn't done it, but Congress has abdicated that role."