Former Portland resident Jeff Reynolds and 'The Fields Bar & Grill' owner Jim Rice joined 'Fox & Friends First' to discuss how the homeless crisis and crime surge have prompted many to flee the city.

Portland, Oregon, residents are outraged, blaming far-left politicians for the homeless crisis and crime surge fueling an exodus from the city.

Jeff Reynolds, who recently moved from the city, and The Fields Bar & Grill owner Jim Rice joined "Fox & Friends First" on Wednesday to discuss how the crises in the Democrat-run city have impacted the community and why politicians are to blame for the spiral.

"I think it really is a matter of not wanting to confront the problems," Reynolds told co-host Todd Piro. "I think the problems are so big, and they want to hold on to their woke ideologies to the point that they're sacrificing actual public safety. They think that they've got the answers, and anybody that has a different idea is dismissed."

PORTLAND, THE SITE OF MASSIVE GEORGE FLOYD PROTESTS, HAS BEEN RAVAGED BY VIOLENT CRIME SINCE

Reynolds lived in the city for almost three decades, but was forced to flee over what he called the "unbearable" circumstances.

"I don't know if there's one final straw there were infinite final straws," Reynolds said. "I guess talking to my neighbor across the street and all of the times that she told me that she had to clean up after homeless people defecated in her yard, that was a big one."

Just on the other side of the Delta Plex soccer field and a local park in Portland, Oregon, this homeless camp exists. These photos were taken Oct. 22, 2019, off of North Denver Avenue, where fall foliage is beautiful. (iStock)

"And there was a park down the block from my house half a block away, beautiful nature park," he continued.

"They rehabbed it … and it was just infested with homeless people drugs, needles, people having sex in the park, people defecating in the park, the whole thing. I mean, it just got unbearable."

Rice, who is a local restaurant owner, said small businesses in the area have taken a particularly significant hit battling the crises.

He cited one neighbor who was forced to close his doors because insurance was not able to cover all the losses endured from a string of burglaries. 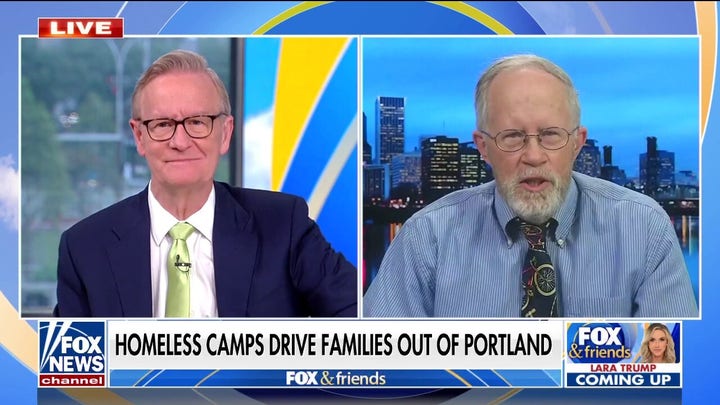 "We have people all around us that are making the decision to turn around and leave," Rice said.

"They're selling their places literally at a loss just to be able to get out of Portland. They've lost faith in the local government."

"Our business has been burglarized five times in the last year," he continued. "U.S. Outdoor, which is only maybe about six blocks from us, they have been burglarized 17 times. They finally had to close their doors because they just could not afford being burglarized as many times as they are."

Total crime has spiked nearly 25% according to the Portland Police Department. Motor vehicle theft has increased by 51%, burglary by 19% and robbery by 42%.