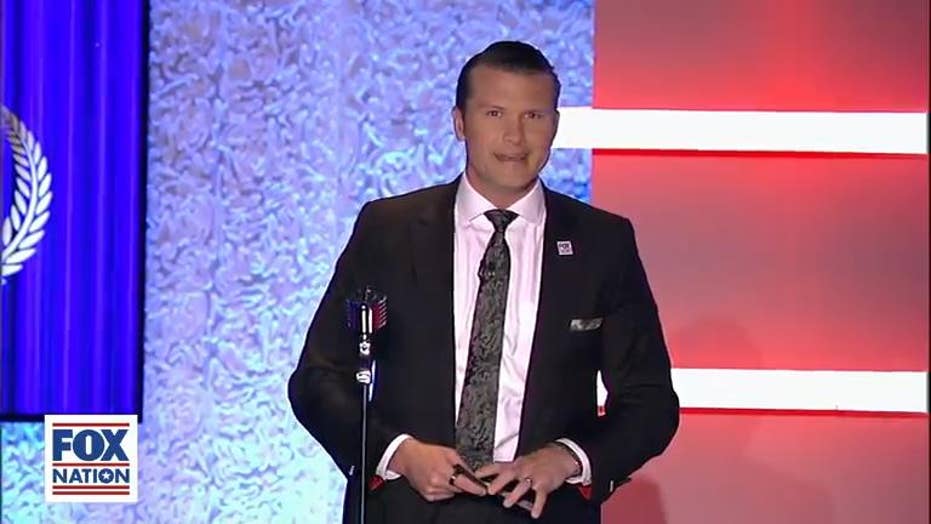 "Fox & Friends" weekend host Pete Hegseth shocked fans at the Fox Nation Patriot Awards last week when he revealed an American flag sewn into the inside of his jacket.

As emcee of the event, Hegseth spoke about American patriotism and his time serving as a reserve military officer before flashing the surprise lining of his suit jacket.

"I just walked the red carpet where normally they ask the question 'who are you wearing?'"

"Well," he continued, "they did not ask me that tonight but I'm gonna tell them who I'm wearing anyway," Hegseth said, revealing a large American flag as the audience erupted in loud applause.

The red carpet event, dubbed the "Golden Globes of conservative media," honored "everyday American heroes who have shown steadfast dedication to our nation."

As a veteran and Fox Nation host, Hegseth felt personally connected to the cause, he explained.

"We showcased the unsung heroes who went above and beyond for our country. As an Army veteran, I could not have been more honored to emcee the historic evening. St. Petersburg was a natural place to host it — a town full of patriots and Fox News fans," Hegseth said.

Other famous guests in attendance included country music singer-songwriter John Rich, who performed at the show, the cast of "Duck Dynasty" and many more, who came out to support American patriotism at its best.

FNC will present a one-hour program dedicated to the Patriot Awards on Sunday, Nov. 24, at 10 p.m. ET.