Roberts drifts away from conservative bloc

Some political insiders say Supreme Court Justice John Roberts has drifted away from the conservative bloc, providing hope for Democrats and angering Republicans.

The vice president’s comments – made during a discussion with Christian broadcaster CBN News – follow several cases before the court in which Roberts, a 2005 appointee of former President George W. Bush, has sided with the court’s liberals in majority opinions.

“We have great respect for the institution of the Supreme Court of the United States but Chief Justice Roberts has been a disappointment to conservatives,” Pence told CBN’s David Brody, according to the network’s website.

Pence pointed in particular to Roberts voting in 2012 to uphold ObamaCare, a more recent decision to uphold Nevada’s coronavirus-related limits on church gatherings and a Louisiana case that determined whether abortion-clinic doctors should have admitting privileges at local hospitals, CBN reported.

Regarding the Louisiana case, Pence called it a “wake-up call” for pro-life voters.

“That’s a very modest restriction on abortion providers,” Pence told Brody. “But a narrow majority in the Supreme Court still said it was unacceptable. I think it’s been a wake-up call for pro-life voters around the country who understand, in a very real sense, the destiny of the Supreme Court is on the ballot in 2020.”

Future openings on the Supreme Court have been a topic of speculation in recent years as Associate Justice Ruth Bader Ginsburg, 87, deals with increasingly frequent health-related issues – spurring talk of her possible retirement – and other members of the court advance in age. Ginsburg is the oldest member of the court, followed by Associate Justices Stephen Breyer, who will turn 82 on Aug. 15; Clarence Thomas, who is 72; and Samuel Alito, who is 70. 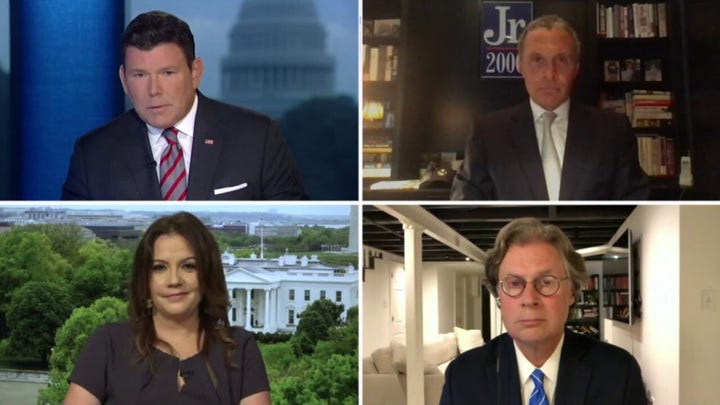 The remaining members of the court, including Roberts, are all younger than 70.

Pence has been in what might be described as “attack mode” in recent days, with sharp critiques targeting New York’s Democratic Gov. Andrew Cuomo and Democrats serving on the House Judiciary Committee.

In a Monday night appearance on Fox News’ “The Ingraham Angle,” Pence fired back after Cuomo said the federal response to the coronavirus pandemic needed a “reset” from the “top.” (Pence heads President Trump’s Coronavirus Task Force.)

“Our hearts grieve for the fact that 1-in-5 of all the American lives that have been lost in the coronavirus pandemic were lost in the State of New York,” Pence told host Laura Ingraham, "and some of that was because of poor decisions by the state and by Governor Cuomo.”

Then on Fox News’ “The Story” on Tuesday, Pence told host Martha MacCallum that the House Judiciary Committee’s Democrats – including panel Chairman Jerrold Nadler of New York -- were grandstanding during a recent hearing with Attorney General William Barr.

“Bill Barr is leading the Justice Department in this country with great integrity and brings a lifetime commitment to the rule of law,” the vice president said. “But to see it today, in the little bit that I was able to watch, it was clear that the Democrats wanted to hear themselves talk more than they wanted to hear from the attorney general of the United States.”

The complete CBN News interview with Pence is scheduled to air Thursday on the network’s “The 700 Club” program. Check local listings for time and station.