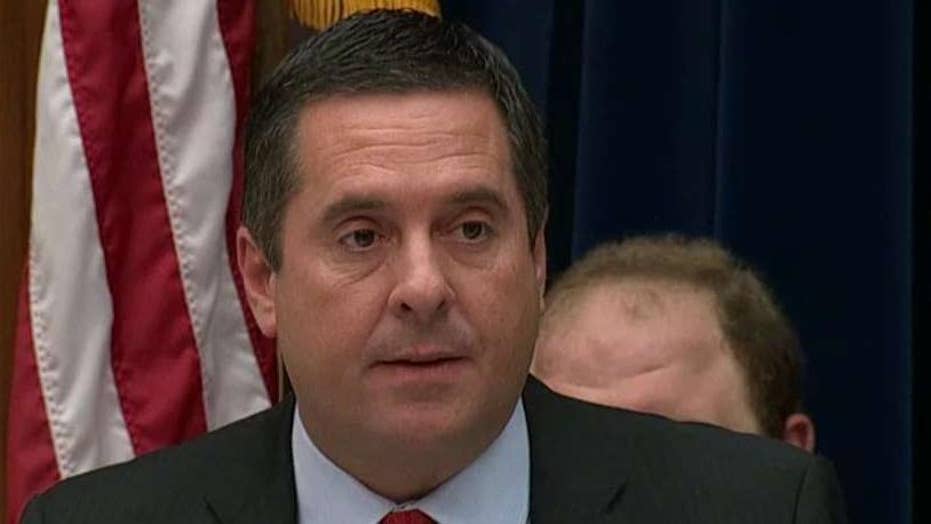 Nunes: I want to congratulate the Democrats on their latest information operation warfare against the president

California Rep. Devin Nunes said on Thursday that Democrats enlisted the mainstream media to gin up a “fake story” to get President Trump impeached.

“I want to congratulate the Democrats on the rollout of their latest information warfare operation against the president, and their extraordinary ability once again to enlist the mainstream media in their campaign,” Nunes, the Intelligence committee ranking member, said in a fiery opening statement during Thursday's hearing with the director of national intelligence. The hearing was called to discuss the whistleblower complaint that touched off the latest impeachment push.

“This operation began with media reports -- from the prime instigators of the Russian collusion hoax -- that a whistleblower is claiming President Trump made a nefarious ‘promise’ to a foreign leader,” Nunes continued. “The released transcript of the call has already debunked that central assertion, but that didn’t matter. The Democrats simply moved the goalposts and began claiming that there doesn’t need to be a quid pro quo for this conversation to serve as the basis for impeaching the president.”

The top Republican on the House Intelligence Committee then blasted House Speaker Nancy Pelosi for saying Democrats have other “candidates for impeachable offenses” if the latest controversy didn't meet the bar. At issue in the complaint was Trump's July phone call with Ukraine's president in which he sought an investigation of the Biden family. A transcript of the call released by the White House confirmed that request but did not show Trump explicitly leveraged U.S. aid as initially suggested in reports.

“So, there you go. If their whistleblower operation doesn’t work out, the Democrats and their media assets can always drum up something else,” Nunes said.

Nunes then listed a series of issues with both the whistleblower and the complaint, such as the inspector general finding “arguable political bias” against Trump.

“So, once again, this supposed scandal ends up being nothing like what we were told. And once again, the Democrats, their media mouthpieces, and a cabal of leakers are ginning up a fake story, with no regard to the monumental damage they’re causing to our public institutions and to trust in government, and without acknowledging all the false stories they propagated in the past,” Nunes said.

Nunes said the media used the same playbook for countless allegations that the Trump campaign colluded with Russia.

“We’re supposed to forget about all those stories but believe this one,” he said.

Nunes said that Democrats want a public spectacle, as opposed to actual answers “so we’ve been treated to an unending parade of press releases, press conferences, and fake news stories.” He said the hearing should have been conducted behind closed doors but that “only makes sense when your goal is to get information, not to create a media frenzy.”

Nunes ended his opening statement by saying Democrats “should end this entire dishonest, grotesque spectacle and get back to solving problems.”

“Judging by today’s charade, however, the chances of that happening anytime soon are zero to none,” he said.