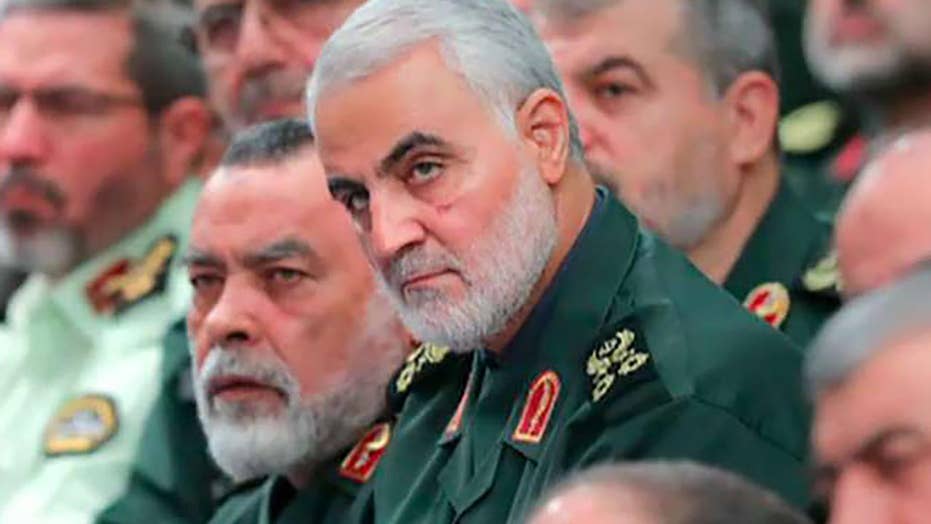 Did the media forget Qassem Soleimani was a terrorist?

Farnaz Fassihi, an Iranian-American journalist who covers Iran for the paper, shared the video in the early morning hours after the Pentagon confirmed President Trump ordered a targeted drone strike that killed Soleimani and other military officials at Baghdad International Airport in Iraq.

“Rare personal video of Gen. Soleimani reciting poetry shared by a source in #Iran. About friends departing & him being left behind,” she wrote in a tweet with the video.

Social media users accused Fassihi of spreading Iranian propaganda and attempting to garner sympathy for the “shadow commander” who the U.S. State Department says is responsible for the deaths of hundreds of American and coalition service members and the wounding of thousands more. Washington confirmed that Soleimani, as leader of Iran's Revolutionary Guard Corps’ Quds Force, orchestrated the Iran-backed militia attack on the U.S. Embassy in Baghdad on New Year’s Eve and was planning other imminent attacks on U.S. forces.

“Showing the soft side of a terrorist who killed and maimed thousands of people also shows the true colors of the New York Times,” one user wrote.

“This is not reporting. Reporting would be writing of his murder of hundreds of thousands of civilians. His starving of Syrian cities and towns. His proxy terrorists and militia spreading wars and terror in Iraq, Lebanon and Yemen. The millions of Iraqis rising up against him,” Rashad Ali, a counter-terrorism consultant and author wrote.

Fassihi later defended her choice to share the video, saying it was not an endorsement. She did not delete the initial tweet, which remained active on her account as of early Saturday.

“Folks attacking me for sharing this video: It’s called reporting. It’s not an endorsement or sympathy. I share whatever info I get for all to see. That’s all,” she wrote, evoking further scrutiny online.

Several journalists also slammed Fassihi for spreading “fake news” after she tweeted about “unconfirmed” reports from the Islamic Revolutionary Guard Corps (IRGC) which said missiles were being fired at the U.S. Ain Assad Air Base in Iraq.

Those reports were later determined to be false, according to Reuters, and there had been no explosion at the base in the hours following Soleimani’s death. Images circulated online showing a fiery blast were old. Back in April, the U.S. State Department designated the IRGC a Foreign Terrorist Organization.

According to screenshots of the since-deleted tweet, Fassihi wrote: “Breaking: Unconfirmed reports of ballistic missiles hitting largest US military base Ain Al-Assad in #Iraq & massive explosions, via IRGC Telegram channels.”

She later posted an update, saying “These reports of attacks on US base are not true according to Iraqi military officials… I deleted the original tweet which came from IRGC Telegram channels & later denied by Iraq.”

In a string of tweets, Fassihi further explained her justification for sharing the video of Soleimani reciting a poem, saying that it helps explain why Iran promised fierce revenge on the U.S. after his slaying.

“Photos & videos of him leading prayers in battlefield, sharing meals w/fighters, kissing orphans & reciting poetry were all collectively part of that image/brand making.

“To understand why the reaction to his killing has been so fierce from Iran to Iraq, Lebanon & Syria & why it may unleash war it's important to look at him also as the brand/symbol of Islamic Republic not just IRGC commander.

“The Islamic Republic has many commanders. But it only had one Qasem Sulaimani. The blow for the regime is more symbolic than strategic. By choice or design he had become THE face of Iran's regional power plays.