Neighbor with footage of Ma'Khia Bryant shooting: Officer 'did what he thought was best'

Donavon Brinson, who captured footage of the fatal shooting of an Ohio teen by a police officer, says the officer was not faced with many choices and only had seconds to respond.

The Columbus, Ohio, police officer who fatally shot a teen Tuesday "reacted with what he thought was his best judgment," a neighbor whose home-surveillance camera captured video of the incident said Thursday.

Donavon Brinson shared his views on Fox News' "The Faulkner Focus" in an exclusive interview after reviewing the footage.

Brinson did not witness the incident himself, he told host Harris Faulkner, but reviewed the surveillance footage recorded from his home, which is located across the street from where the shooting took place.

"The video doesn’t lie," he said. The police officer "did what he thought was best," given he had only seconds to react, the neighbor asserted.

Ma’Khia Bryant, 16, has been identified by her family as the person who was killed in east Columbus after someone called the police. Body camera footage released by police showed the teen attacking two other people with what appeared to be a knife before a responding officer fired multiple shots. She later was pronounced dead at a hospital.

"This never should have happened," the teen’s mother, Paula Bryant, told 10TV in a teary-eyed report. "She's a loving girl."

According to Franklin County Children Services, Bryant was a foster child under their care.

Police say they were called to the scene around 4:30 p.m. after receiving a report of someone attempting to stab other individuals at a home.

The bodycam footage shows that as soon as police arrived, a young female tackled another female to the ground, having what appeared to be a knife in her hand. The girl can then be seen charging at another female while raising the purported knife in the air - at which point the officer opened fire.

Brinson noted that the officer was not faced with many choices, since he "only had seconds to respond." 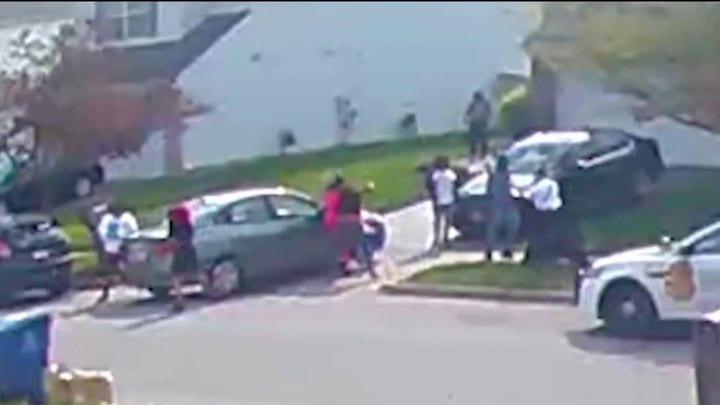 "From my point of view watching this, unfortunately, the whole scenario put him in a bad spot regardless of what the situation was," Brinson said.

Brinson also told Faulkner he was not sure exactly what the fight was about, but noted that when he and his wife were coming home from a late lunch they came across "a young lady in pink and another young lady out front exchanging words."

"We didn’t think too much about it, but they were very, very loud. You could tell they were upset about something," he continued.

He also said he saw one of the girls locking another girl out of the house, "and they said something about, ‘How dare you lock me out of my mama’s house. This is my house too.’"

Brinson said he thought the incident would resolve itself, the door would get unlocked, "and it will be done and over with." Approximately five minutes later, though, he said he heard gunshots.

Brinson, who was inside his home at the time, said after he realized there were no retaliation shots, he figured an officer was outside. He told Faulkner he then made his way to the window, when he "saw Ma’Khia on the ground, and everyone else kind of in chaos."

Brinson said he gave his footage to police who were on the scene.

The Ohio Bureau of Criminal Investigation is reportedly handling the shooting. The officer who pulled the trigger has been taken off the streets, authorities said.

On Wednesday, the Columbus Police Department identified the officer involved in the shooting as Nicholas Reardon, who had been on the force for 16 months, according to a personnel file obtained by Fox News.