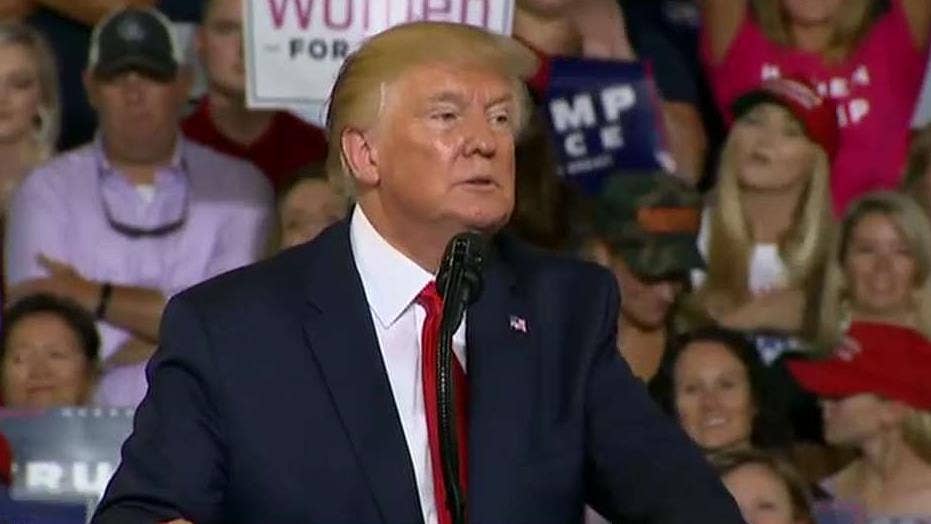 Trump drills down on criticism of progressive 'squad' at NC rally

The president steps up his feud with Democrat congresswomen at a raucous campaign rally; Kevin Corke reports.

MSNBC anchor Andrea Mitchell is facing criticism on Thursday over her declaration that none of the four progressive congresswomen of "The Squad," including Rep. Alexandria Ocasio-Cortez, D-NY, are "socialists."

Amid a bitter feud, President Trump attacked the freshman lawmakers during his rally on Wednesday and labeled them as "socialists." But it was in reaction to remarks from House Minority Leader Kevin McCarthy, D-Calif, who also referred to the "squad" as "socialist Democrats" that Mitchell wanted to fact-check.

"None of these members of Congress are socialists, but that is the way the Republican leadership wants to frame this election face-off,” Mitchell told the panel. "There’s not a single member of these congressional representatives who are avowed socialists, so I don’t know where that is coming from other than opposition research.”

"Alexandria Ocasio-Cortez is an outspoken member of the group Democratic Socialists of America, the “largest socialist organization in the United States” according to their own description, a fact which has been in no way mysterious and was featured in profiles on the Congresswoman by everyone from the Daily Beast to the New York Times," Howe wrote in an op-ed. "She also self-identifies as a “Democratic Socialist”, and argues the concepts on Twitter.

Howe later pointed out how Ocasio-Cortez has claimed that “capitalism is irredeemable” and that she had promoted "democratic socialism" during a recent appearance on "The Late Show."

"Mitchell obviously just assumed that because it was said by a Republican it must be untrue, and so didn’t bother to check," Howe said.

"Someone who describes herself as a 'democratic socialist' is a socialist. The end," Houck explained. "And even if Ocasio-Cortez didn't describe herself that way, one look at her policies and they fit the description."