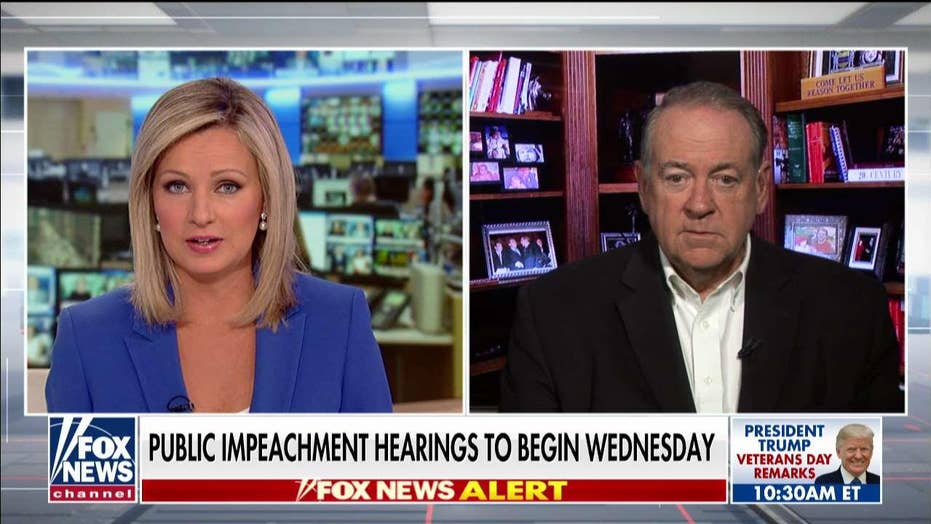 “Somebody show Eric Swalwell that tape of [former Vice President] Joe Biden bragging about how he told the Ukrainians that if they didn’t fire a prosecutor within six hours, the money was off the table and he used some rather salty language and he was boasting about it in a forum publicly,” Huckabee told “America’s Newsroom.”

“Show him that tape and tell me there’s not something to investigate ... Swalwell is totally off the cracker with this one. His cheese has fallen to the floor."

Swalwell lambasted Republican calls for Joe Biden’s son, Hunter, to come before the House and testify during the public Trump impeachment inquiry hearings, saying, "We’re not going to go back in time and revisit conspiracy theories that were implicated in the president’s call.”

Though the timing raised concerns among anti-corruption advocates, there has been no evidence of wrongdoing by either the former vice president or his son.

The first public hearings in the impeachment inquiry are scheduled to be held this Wednesday and Friday, featuring current and former officials with knowledge of the Ukraine controversy.

Wednesday's hearing will feature Bill Taylor, the acting U.S. ambassador to Ukraine. He has already testified behind closed doors that the president pushed Ukraine to investigate election interference, Biden and his son and their Ukrainian dealings — and that he was told U.S. military aid and a White House meeting were used as leverage to get a public announcement from Kiev that the probes were underway.

Trump has denied any wrongdoing, repeatedly insisting his call with the Ukrainian president "perfect."