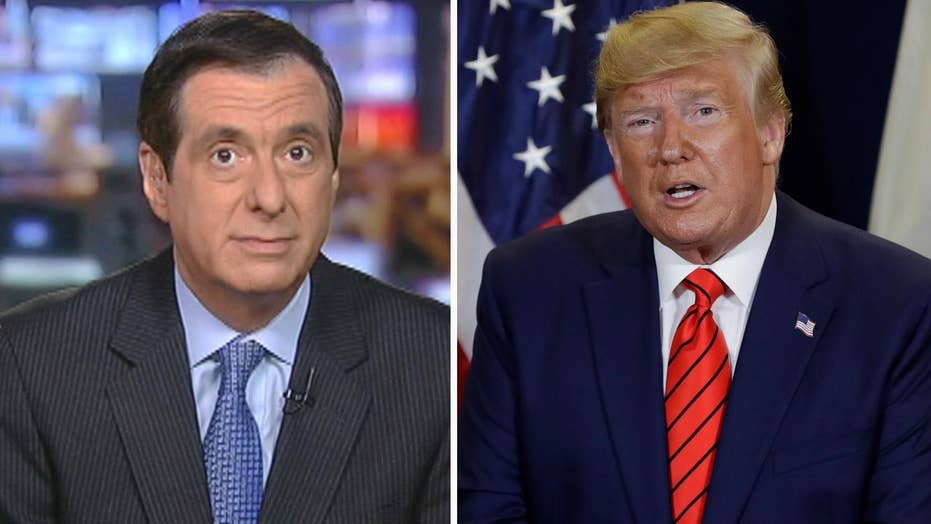 'MediaBuzz' host Howard Kurtz weighs in on the battle between President Trump and the mainstream media as the Ukraine story evolves.

With Nancy Pelosi finally bowing to Democratic pressure and launching a formal impeachment inquiry, many in the media may be getting their wish.

After all, many pundits, especially on the left, longed for the same outcome during the Russia investigation, only to be bitterly disappointed.

But the Ukraine uproar has a far simpler story line than the complicated Russia probe. And it proved a tipping point for the House speaker, who has long believed that impeachment could boomerang on the Democrats without ultimately ousting Trump, who she sees as highly vulnerable in 2020. But with 175 of her members, including some moderates, hopping on the impeachment bandwagon, Pelosi could no longer stem the tide.

HOW TRUMP AND ALLIES ARE SHIFTING THE UKRAINE SPOTLIGHT TO BIDEN

In a flag-bedecked speech, Pelosi said Trump’s actions on Ukraine “have seriously violated the Constitution,” that he “must be held accountable,” and announcing an “official” investigation by a half-dozen committees.

As strange as it sounds, Pelosi’s reluctant move could in some ways help Trump, because it shifts the terms of debate.

Trump’s preferred mode of defense is to go on offense—whether it’s against Crooked Hillary, Mueller’s angry Democrats or Sleepy Joe’s alleged transgressions. It’s all about demonizing the other side, just as the left does to Trump.

Especially after his planned release today of a transcript of his July call with Ukraine’s leader, the president and his allies can argue that even if he went too far in bringing up Joe Biden with a foreign leader, it does not warrant the drastic remedy of impeachment.

He’s already called it “witch hunt garbage,” and will undoubtedly cast it as one perpetrated by his enemies in the opposition party, the press and the Deep State. He can energize his supporters, who will see their hero in danger of being forced from office. And the resulting fireworks will not only obliterate any semblance of a Democratic agenda, it will overshadow what Biden, Bernie, Elizabeth and the rest are doing on the trail.

Trump asked, not unreasonably, how Pelosi could take this step without even having seen the details of the phone call.

Outside the hothouse of the media and political world, I don’t sense that Ukraine has quite reached the level of a political earthquake. And that, for the moment, has the president’s critics baffled.

I believe the media coverage is a key factor, as I’ll explain in a moment.

But first, there’s no doubt that the Washington Post moved the ball with a report that Trump told his acting chief of staff “to hold back almost $400 million in military aid for Ukraine at least a week before a phone call in which Trump is said to have pressured the Ukrainian president to investigate the son of former vice president Joe Biden, according to three senior administration officials.”

The piece says that OMB officials relayed Trump’s order to State and the Pentagon, and were ordered to give members of Congress no explanation beyond that the delay was part of an “interagency process.”

The story also quoted Democratic Sen. Chris Murphy as saying that Ukrainian President Zelensky told him during a visit this month that the aid was cut off as a “consequence” of his unwillingness to launch a probe of the Bidens. (The money has since been released.)

The president did not deny the story but shifted his explanation, saying he held up the money because he wanted Europe to pay more for Ukraine’s defense. He also scoffed at the notion of impeachment before his speech at the U.N., telling reporters: “What Joe Biden did for his son, that’s something they should be looking at.”

The New York Times’ Peter Baker reported yesterday morning that Trump now seems to be saying, as the headline puts it, “So What If I Did?”

The piece calls this “an astonishing breach of the norms governing the American presidency…If anything, the president has grown even more defiant since Mr. Mueller found insufficient evidence to establish a criminal conspiracy between the Trump campaign and Russia, almost as if having avoided charges, he is daring the establishment to come after him again. The man who once said he could shoot someone on Fifth Avenue in Manhattan without consequence seems to be testing whether he can do the political equivalent.”

With more House Democrats coming out for impeachment—more than two-thirds of Nancy Pelosi’s caucus is now in that camp—the question of whether Ukraine is a dramatic tipping point looms large.

My sense is that there’s a fatigue factor for Trump scandals. And besides the president and Rudy Giuliani trying to shift the spotlight to the Bidens, as I wrote yesterday, the media coverage of the last few years is coloring the current climate.

Take the Bob Mueller probe. While I’ve always argued the Russia investigation was a legitimately big story that led to several high-level indictments, can anyone really dispute that the coverage was so histrionic as to be misleading? The constant drumbeat was so relentless and so negative that it seemed only a matter of time before Trump was run out of town. Every minor development was cranked up to 11.

And while the final report contained disturbing material, it also found no evidence that Trump actively cooperated with Russian operatives or hackers, and Mueller’s halting testimony was the final nail in the coffin.

When the media fixated for more than a week on Sharpie-gate—and yes, Trump fueled the coverage with daily blasts about his handling of the hurricane—it was another case of runaway hype.

Most of these controversies were very real, sometimes troubling, and yet trumpeted with a this-time-he’s-gone-too-far tone until each story faded. Trump’s constant pushback against the “fake news media,” and his attacks on Democrats and “witch hunt” investigators, added to the feeling that these were nothing more than partisan brawls.

In other words, journalists are suffering from boy-who-cried-wolf syndrome. Now that they have extremely serious allegations to pursue, the ensuing uproar sounds too much like so many other scandals and mini-scandals that, fairly or unfairly, didn’t move the needle.

There’s also an emerging theory, argued for some time by the Federalist’s Ben Domenech, that Trump wants to be impeached.

“If the Democrats impeach him they will be doing something unpopular instead of something popular… the likely Democratic nominees are all more popular than Trump, and so anything that puts the Democrats on the wrong side of public opinion may look better, through Trump’s eyes, than the status quo…

“Trump is happy to pit his overt abuses of power against the soft corruption of his foes. This is an aspect of Trumpism that the president’s critics find particularly infuriating — the way he attacks his rivals for being corrupt swamp creatures while being so much more nakedly compromised himself.”

Whether or not you agree that he did something wrong, he excels at these dual-corruption debates, that it’s the other side that should face prison terms.

No president, not even Donald Trump, wants to be impeached. But if past journalistic excesses help convince the public that the Ukraine story is just more exaggeration, and if the press is viewed as a pro-impeachment movement, Trump will paint the media as helping the Democrats try to end his term.