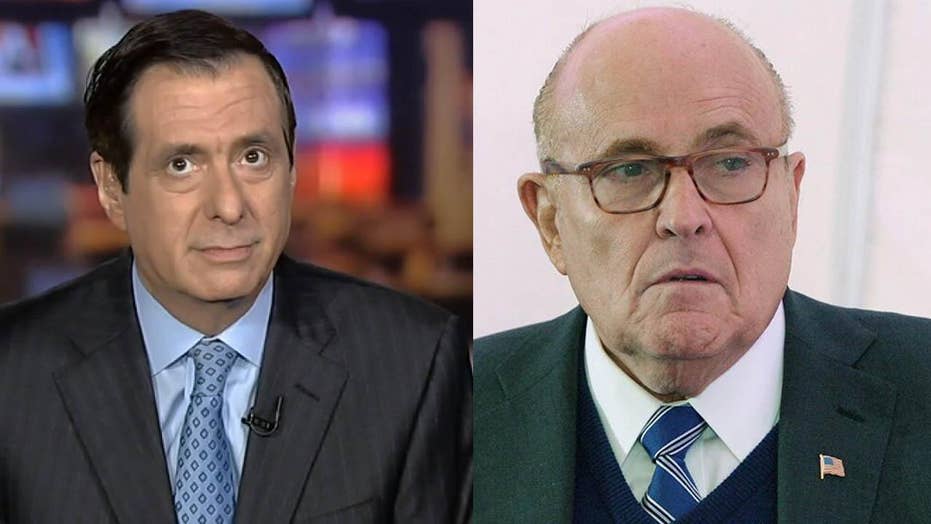 Howard Kurtz: Giuliani is breaking through after pushing Biden story for months

In Donald Trump’s view, the best way to neutralize a scandal is with a good counter-scandal.

We saw this throughout the Russia investigation, when the president countered the allegations of obstruction with a crusade against a witch hunt, Deep State conspiracy and fake news.

Trump is doing it again with the media and political furor over his phone call with Ukraine’s leader, trying to shift the spotlight to questionable conduct by Joe Biden and his son. And early indications are that it’s working.

Philippe Reines, the former State Department official and longtime Hillary Clinton confidant, said on “Media Buzz” that after the first round of political combat over Ukraine, Trump is the winner.

Whether that’s true or not, calling out Biden is very much the focus of the president’s counterattack against allegations that have reignited Democratic talk of impeachment.

Rudy Giuliani told me on Sunday that the political crisis is helping him accomplish what he’s been trying to do for five months, which is focus media scrutiny on the former vice president and Hunter Biden, who was paid big bucks by a Ukrainian gas giant that had come under investigation. Joe Biden has publicly bragged about pressuring Ukraine into firing its top prosecutor, who was overseeing the case—though it was not active at the time--by threatening to withhold $1 billion in U.S. loan guarantees.

Giuliani pushed the Biden story on my show last April, and many other programs as well. He has also met with Ukrainian officials in an attempt to revive the Biden probe there. (No investigation has found wrongdoing by Hunter Biden.)

The president’s personal lawyer laid it out yesterday with Maria Bartiromo: “It’s the only way you can get this out. The only way they would cover this story is by punching the president in the face and then the president deflects the punch which he’s done, the story came down and then he hits with a right hand that’s more powerful.”

And that, in turn, is producing stories like this one the other day in the Washington Post:

“Suddenly, Biden faced two dueling realities: The president he is hoping to defeat next year — and who he describes as morally unfit for office — is under scrutiny for behavior some view as treasonous. But the story is inextricably linked to Biden’s son, pushing one of the topics that Biden is least comfortable discussing into the spotlight.”

The fact is it’s impossible to cover the furor over the Trump call without delving into the details of what at the least is Biden’s son trading on his name (as political relatives have done in every administration).

Trump bristled at Ukraine questions yesterday at the U.N., telling reporters they are "a fake news group of people...If a Republican ever did what Joe Biden did, if a Republican ever said what Joe Biden said, they'd be getting the eletric chair right now." At a time when longshot GOP rival Bill Weld is accusing him of treason, the president did not explain why Biden's actions would result in a death penalty case.

Those comments followed Trump telling reporters on Sunday that what the Wall Street Journal and others had reported about the July call was essentially true, though he insists it was totally appropriate:

So Trump is being accused of the same thing he’s saying Biden did in 2015, pressuring Ukraine for partisan reasons. The administration has been holding up $250 in military aid to help Ukraine fight Russian separatists. Trump says he never brought up the aid, but he didn’t have to—it’s hanging in the air.

The president said he’d “love” to release a transcript of the call with Volodymyr Zelensky, but has to figure out how to do so.

By the way, Trump was wrong when he recently tweeted that the media “want to stay as far away as possible” from the Biden allegations.

A quick search found many major stories on the matter, including:

New York Times, 2015: “Joe Biden, His Son and the Case Against a Ukrainian Oligarch”

Washington Post, 2019: “As Vice President, Biden Said Ukraine Should Increase Gas Production. Then His Son Got a Job with a Ukrainian Gas Company.”

Joe Biden, for his part, angrily accused Trump over the weekend of abusing his power in an attempt to “smear” him because he knows “I’ll beat him like a drum.” Biden said he never discussed overseas business dealings with his son, which prompted Trump to call him a liar. Hunter Biden told the New Yorker they briefly discussed it once.

The more the story devolves into a partisan back-and-forth, the more it neutralizes the political danger to the president. That was the playbook against Bob Mueller.

Nancy Pelosi is under growing pressure from some previously impeachment-wary Democrats to drop her opposition in light of Ukraine. She is holding the line for now while warning the White House that failure to turn over key documents could prove the tipping point.

But Trump can easily survive—again—if he turns this into another two-sided scandal, filled with interminable details and unpronounceable names, that most Americans can’t follow.