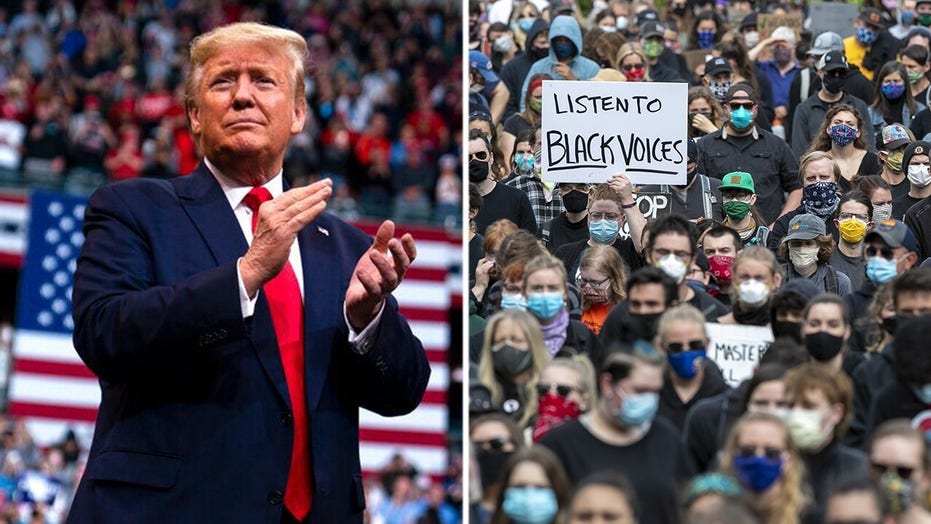 Are there different health risks associated with Trump rally versus protests?

Now it’s the left’s turn to raise questions about a candidate’s physical stamina.

A simple walk down a ramp has led to a sea of speculation about Donald Trump’s health.

I have no idea whether there’s anything wrong with the president, but I find all the medical theorizing to be on, well, shaky ground.

I’ve watched the video of Trump descending the ramp after a speech to West Point graduates several times. What I see is a man, a day before his 74th birthday, walking cautiously, even gingerly down a ramp, determined not to fall. The chatter has gotten so loud that the president felt the need to respond on Twitter:

“The ramp that I descended after my West Point Commencement speech was very long & steep, had no handrail and, most importantly, was very slippery. The last thing I was going to do is ‘fall’ for the Fake News to have fun with. Final ten feet I ran down to level ground. Momentum!”

The Washington Post isn’t buying it: “Elements of Trump’s explanation strained credulity. Trump’s claim that the ramp had been ‘very slippery’ was inconsistent with the weather, which on Saturday in West Point, N.Y., was sunny and clear-skied...In addition, Trump wrote that he ‘ran down’ the final stretch of the ramp. Video footage of the episode shows the president picking up his pace slightly for the final two steps, but that would hardly be considered a run or a jog by any standard definition.”

The New York Times added a point that’s been kicking around in media circles for months:

“The videos again raised questions about the health of Mr. Trump, whose advisers have never fully explained his abrupt visit to Walter Reed National Military Medical Center in November, saying at the time only that it was intended to get a jump on his annual physical.” The White House doctor has since pronounced Trump in good health “but provided little information beyond blood pressure” and his use of hydroxychloroquine.

Oh, and there’s another incident of water-gate proportions: Trump lifting a glass of water with his right hand, then using his left hand to steady it before he took a sip.

Now the man's only problem may be advancing age, and the videos seem pretty thin gruel on which to mount a buffet of speculation.

I was sharply critical when some people on the right kept portraying Hillary Clinton in 2016 as practically on her deathbed, both when she got the flu and when she very shakily got into a car after a 9/11 remembrance ceremony. If liberals thought that was unfair, they shouldn’t slide into the same conduct now.

But here’s the thing: Trump and his allies were among those who took potshots at Hillary’s health in the last campaign, including an ad questioning whether she had the “stamina” for the White House. He said, among other things, “she actually could be crazy” and was “totally unhinged,” suggested she “took a short-circuit in the brain,” and “honestly, I don’t think she’s all there.”

And the president continues to question the mental acuity of “Sleepy Joe.” I’m sure that makes Trump’s critics feel that he’s getting a taste of his own medicine. But it doesn’t mean the press has to go down that road.

Some pundits, though, are endorsing the payback approach. “If Trump can openly question the physical and mental fitness of his Democratic opponents,” says CNN’s Chris Cillizza, “then when there is a moment where he looks frail, it is absolutely fair game to ask questions about his own well-being -- particularly given his age and how little we know about his medical past.”

It’s clear this president is sensitive to the physical image he presents, and that could be the main reason he won’t wear a mask in public during the pandemic.

Former CNN and ABC correspondent Jeff Greenfield says Trump is right about “just how damaging such a picture of weakness can be. It may sound trivial, and it’s often unfair, but when a modern president, or even a candidate, exhibits physical weakness, it comes with a political cost.”

In Politico, Greenfield recounts some of the lowlights of past administrations. Jerry Ford stumbling down the steps of Air Force One, leading to many Chevy Chase impersonations. Jimmy Carter collapsing during a six-mile race near Camp David, looking utterly drained and exhausted. George H.W. Bush throwing up on the Japanese prime minister during a state dinner. All of them lost reelection.

The reality is we have two septuagenarians running for president, and people that age have health problems. And the public has the right to know about those problems. But chatter about a downhill walk or grabbing a glass of water isn’t helping the situation.