House Minority Leader Kevin McCarthy slammed Ilhan Omar as "anti-Semitic" and "anti-American" on Tuesday and called on Speaker of the House Nancy Pelosi to remove the Minnesota Democrat from the House Foreign Affairs Committee.

During an appearance on "Fox & Friends," McCarthy asserted that Omar had a history of making anti-Semitic comments, referencing a recent tweet where she appeared to equate America with the Taliban and Hamas.

"We have seen unthinkable atrocities committed by the U.S., Hamas, Israel, Afghanistan, and the Taliban," Omar tweeted Monday. "I asked [Secretary of State Antony Blinken] where people are supposed to go for justice."

ILHAN OMAR SAYS AMERICA, LIKE HAMAS AND THE TALIBAN, HAS COMMITTED 'UNTHINKABLE ATROCITIES'

McCarthy said that Omar’s recent string of comments discredited Israel as an ally and were neither "productive" nor "right."

"I will promise you this," McCarthy said. "If [Republicans] are fortunate enough to have the majority, Omar would not be serving on Foreign Affairs or anybody that has an ant-Semitic or anti-American view." 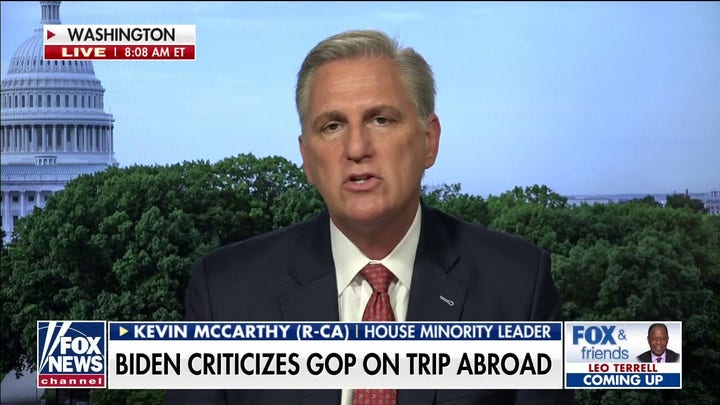 Following criticism from both Republicans and Democrats, Omar claimed that she was "in no way equating terrorist organizations with democratic countries."

Following Omar's explanation, House Democratic leadership said in a statement that "false equivalencies between democracies like the U.S. and Israel and groups that engage in terrorism like Hamas and the Taliban foments prejudice and undermines progress toward a future of peace and security for all."

In a recent appearance on CNN's "State of the Union," Pelosi looked to brush aside the controversial comments from Omar, calling her a "valued member of our caucus," and said she was satisfied with her subsequent "clarification" of her remarks.