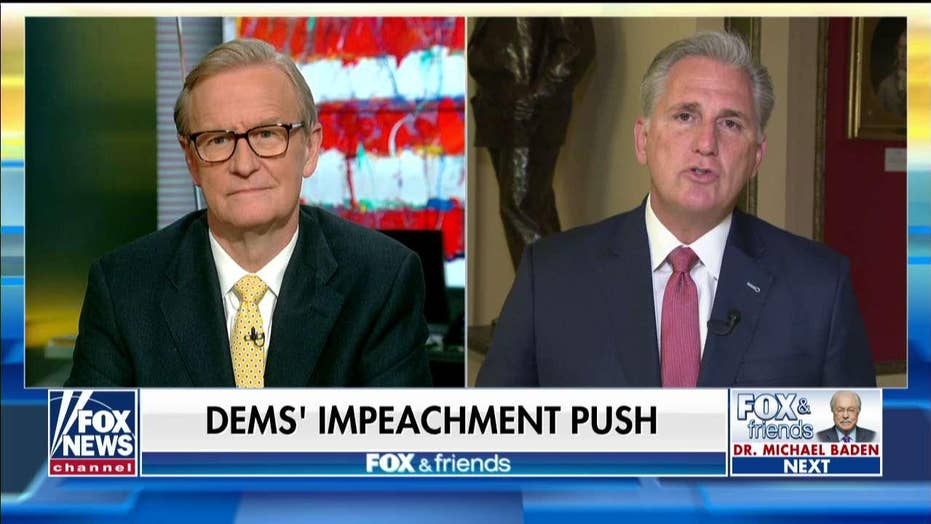 Democratic efforts to impeach President Trump will not stop the GOP from winning back the House in 2020 and regaining full control of Congress, said House Minority Leader Kevin McCarthy, R-Calif., on "Fox & Friends" Wednesday.

McCarthy said House Speaker Nancy Pelosi's, D-Calif., attempts to appease the extremist wing of her party will fail, and Democrats will still lose control of the House to Republicans next year.

"She's going [to lose her power]. It only takes 19 seats to win the majority," McCarthy said. "They have 31 Democrats sitting in seats that President Trump carried. And we're going to carry those again.

"But what's more important here, watch the Democrats as they now approve of impeachment every time they get a primary opponent," he continued, arguing Democrats are moving to the left out of concern over primary challengers who will forcefully call for impeachment.

"Watch Max Rose, [a] congressman, who said impeachment was wrong. Now he's changed the entire system [so] that you're not innocent until proven guilty."

McCarthy also singled out House Intelligence Committee Chairman Adam Schiff, D-Calif., and said his obsession with impeachment has been a distraction from lowering drug costs, instituting a military pay raise and other matters of state that should have already been handled.

"Adam Schiff ... lied to the American public [about] not knowing about the whistleblower," he said earlier in the interview. "He put us through a two-year nightmare with millions of dollars spent. And the worst part about all of this ... [the] government is not funded.

"Our military is not getting their pay raise. Prescription drug prices are not being lowered," McCarthy added. "The agreement with Mexico and Canada, our number one and number two traders, are not ratified, while we're sitting down talking to China — our number three trader. We are making America weaker just because [Democrats] dislike this president."