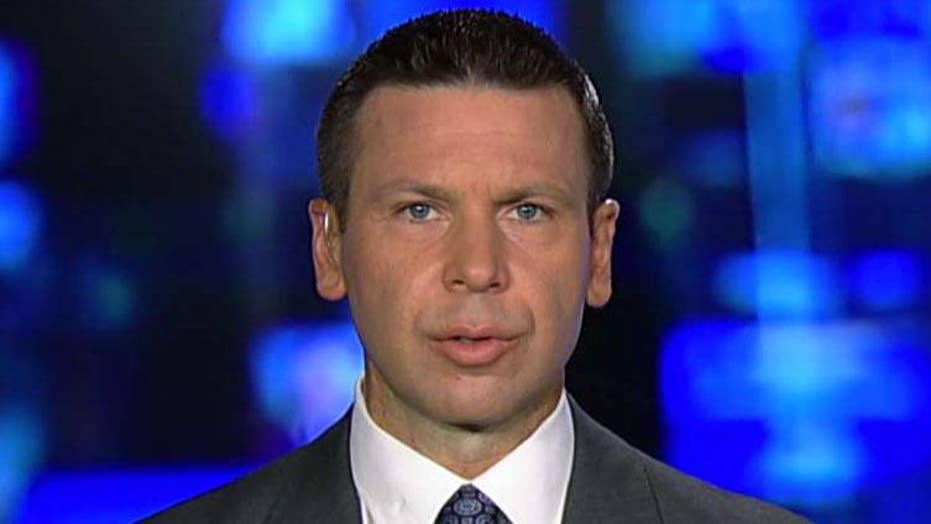 Acting Homeland Security secretary: The Supreme Court gave the DOD a big victory on the wall

Acting DHS Secretary Kevin McAleenan weighs in on the significance of SCOTUS ruling to allow the allocation of Pentagon funds to build the wall along the southern border.

Kevin McAleenan, the acting Homeland Security secretary, told Fox News on Sunday it's a “big victory” that the Supreme Court cleared the way for the Trump administration to tap billions of dollars in Pentagon funds to build sections of a border wall with Mexico.

“There was a big victory at the Supreme Court to allow the Department of Defense to move forward with that $2.5 billion to really accelerate the progress on the wall, and kind of double what we're doing with the congressionally appropriated funding, which is going well, as you noted up to 54 miles since we talked,” he told Maria Bartiromo on “Sunday Morning Futures.”

The court’s five conservative justices gave the administration the green light on Friday to begin work on four contracts it has awarded using Defense Department money. Lower courts had frozen funding for the projects while a lawsuit over the money proceeded. The court’s four liberal justices wouldn’t have allowed construction to start.

The Supreme Court’s action reversed the decision of a trial court, which initially froze the funds in May, and an appeals court, which kept that freeze in place earlier this month. The freeze had prevented the government from tapping approximately $2.5 billion in Pentagon money to replace existing sections of barrier in Arizona, California and New Mexico with more robust fencing.

The case in which the Supreme Court ruled began after the 35-day partial government shutdown that started in December of last year. The shutdown ended in February after Congress approved approximately $1.4 billion in border wall funding, but the amount was far less than the $5.7 billion Presiden Trump was seeking. The president then declared a national emergency to take cash from other government accounts to use to construct sections of wall.

The case before the Supreme Court involved just the $2.5 billion in Defense Department funds, which the administration said would be used to build more than 100 miles of fencing.

One project would replace 46 miles of barrier in New Mexico for $789 million. Another would replace 63 miles in Arizona for $646 million. The other two projects in California and Arizona were smaller.

The other funds were not at issue in the case. The Treasury Department funds so far have survived legal challenges, and Customs and Border Protection has earmarked the money for work in Texas’ Rio Grande Valley but has not yet awarded contracts. Transfer of the $3.6 billion in military construction funds was awaiting approval from the defense secretary.

McAleenan told Bartiromo that “building every day down there in the border … that's already providing significant new operational capability, and helping us control some high traffic areas of the border.”

He said that he did believe the situation at the border has been improving by “almost every measure,” but the only way to eradicate the immigration crisis completely would be through congressional action.