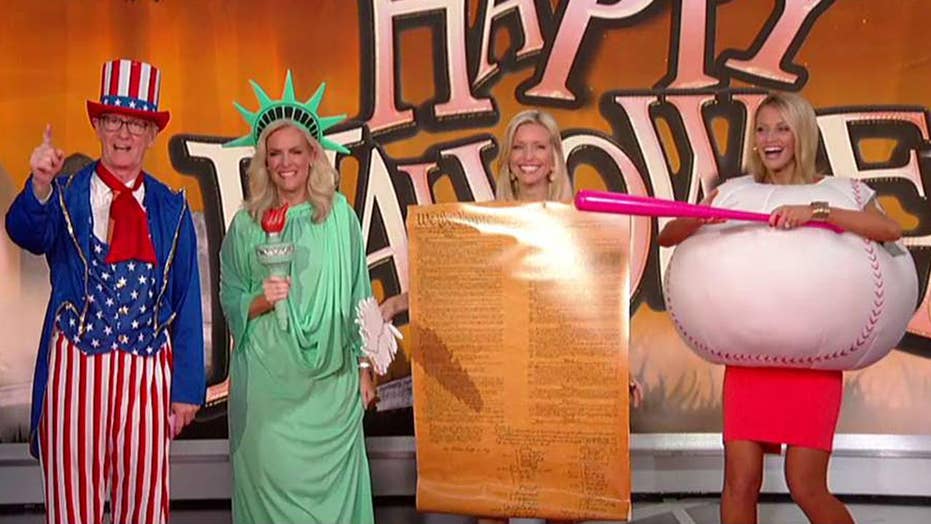 Steve, Ainsley, Janice, Carley and the gang get into costume with some surprise guests to host their annual Halloween parade. Thank you to Party City, Spirit Halloween and the Disney Store!

Rep. Katie Porter, D-Calif., wore a Halloween costume and kept her mask on during a vote Thursday in the House Financial Services Committee.

At one point, Porter reportedly yelled at a reporter about her outfit.

She wore her outfit on the same day Democrats voted for a resolution on ground rules for the impeachment inquiry surrounding President Trump. For Republicans, Porter's display was inappropriate.

"As House Democrats prepare to officially blow up their Majority with impeachment, @RepKatiePorter is prancing around dressed as Batman. This is how seriously these clowns are taking impeachment," the National Republican Congressional Committee tweeted on Thursday.

Steve Guest, the spokesman for the Republican National Committee, also took to Twitter to assail the lawmaker's decision to wear her costume on Thursday.

"Democrat Rep. Katie Porter is making a mockery of the House of Representatives," Guest tweeted. Alongside his tweet was a photo of Porter sitting in the Financial Services Committee.

Porter responded via tweet: "Taking my work in Congress seriously doesn’t mean I take *myself* too seriously. To my kids Luke, Paul, and Betsy, I’m still just Mom—seeing the Bat Signal on Halloween & putting on a goofy costume come with the territory."

Others defended Porter on Twitter. The Young Turks contributor Hasan Piker said that Porter was "f-----g dope" and told critics to "shut the f--k up."

"Of course Republicans, who love their criminal president, got triggered by a Democrat dressing up as someone who beats criminals to a pulp," filmmaker Adam Best tweeted.