Dan Crenshaw: What to know

Hasan Piker, a contributor with the left-wing "Young Turks" network, unleashed a vulgar rant on Rep. Dan Crenshaw, R-Texas, a Navy SEAL veteran whom Piker claimed lost his eye to a "brave" soldier.

Crenshaw, who now wears an eyepatch, lost his eye in an IED explosion while serving in Afghanistan. Piker appeared to be describing the Mujahideen, guerilla fighters in Islamic countries, as "brave."

Piker took issue with an interview in which Crenshaw apparently commented on foreign policy in a way that deeply upset Piker. 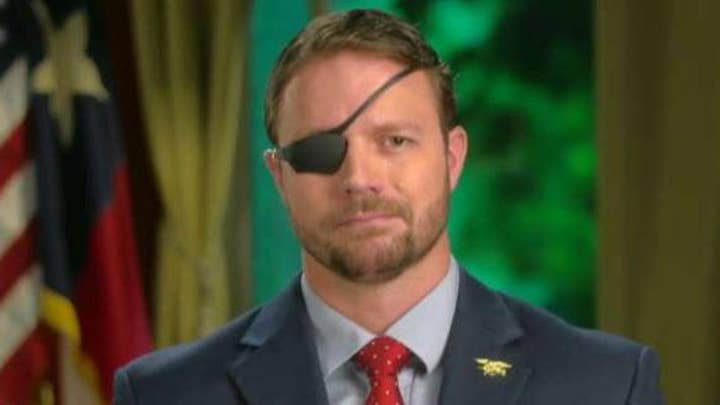 "What the f--k is wrong with this dude? Didn't he go to war and literally lose his eye because some Mujahideen -- a brave f-----g solider -- f---ed his eyehole with their d--k?" Piker asked  Tuesday on the live streaming video platform Twitch.

Piker appeared unapologetic on Wednesday, tweeting that the Texas congressman didn't deserve "extra respect" because he advocated for "senseless wars."

"[I] don't think anyone deserves extra respect when they advocate for senseless wars that send thousands of our young men and women overseas for the profits of the military industrial complex," he tweeted at comedian Steven Crowder.

Cenk Uygur, host of "The Young Turks" show, said he would address the "offensive" comments during a discussion with Piker Thursday night.

Crenshaw responded on Wednesday night, laughing at Piker's outrage and suggesting the liberal commentator was spewing a "weird terrorist fantasy."

"Lol sorry for triggering you Hasan. You’re no Pete Davidson, stop trying so hard." After his election in 2018, Crenshaw faced mockery from Davidson, a "Saturday Night Live" actor.

Amid the backlash, Crenshaw reached out to Davidson, who posted a cryptic Instagram post about not wanting to be on "earth" anymore.

"I talked to him personally [Sunday],"Crenshaw said of the conversation. "We don't go back very far. We're not good friends. But, I think he appreciated hearing from me. I told him everyone had a purpose in this world. God put you here for a reason. It's your job to find that purpose. And you should live that way."