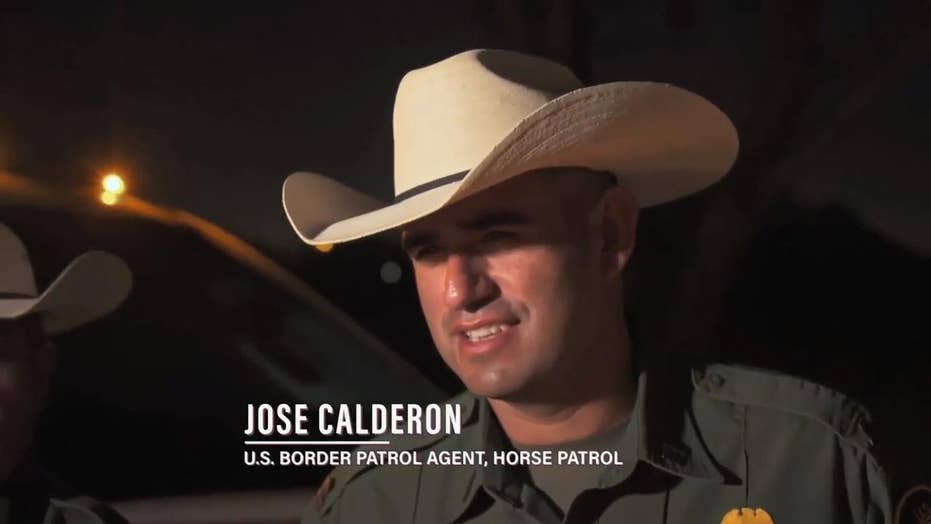 Hispanic-American members of U.S. border patrol rip media coverage: 'They make it feel like it's wrong'

Many of the U.S. Border Patrol agents on the front lines of the U.S. effort to secure the southern border with Mexico bristle at what they see as public misconceptions and media mischaracterization of their work.

In Fox Nation's new series "Lara Logan Has No Agenda," veteran correspondent Lara Logan traveled to the Rio Grande Valley in Texas, where she interviewed a horse patrol unit of the U.S. Border Patrol. These men were all born and raised in the area and most of them are Hispanics.

"At the end of a long day, with the light fading fast, they rested their horses and waited into the night for the next call," narrated Logan. "It seemed like a good moment for a conversation, a glimpse of the view from their side.

"What's one of the things that just drives you crazy that people believe about what's going on down here that's just not true?" she asked.

Jose Calderon, a U.S. Border Patrol agent, replied: "I think a lot of it is how they portray us as like villains. How bad of a job we do or that we're mean to people. That's not the case. We all have families."

Logan pressed: "So why do it then? What does it mean to you? What do you see as your mission?"

Earlier in the episode, Logan was joined by Acting Commissioner of U.S. Customs and Border Protection Mark Morgan, as she got a rare look inside an immigration processing center in McAllen, Texas, which is the largest in the country.

In July 2019, Rep. Alexandria Ocasio-Cortez, D-N.Y., and other Democrats visited a similar processing center in Clint, Texas, and made explosive allegations about the conditions there.

At the time, illegal border crossings were surging and overwhelming facilities built to temporarily detain people.  According to federal government data released in 2019, Border Patrol agents apprehended more migrants at the border in fiscal year 2019 than in any year since fiscal 2007.

"At first, Democrats accused President Trump of manufacturing a crisis at the border," reported Logan. "Then with Border Patrol overwhelmed, checkpoints shut down and the number of people crossing at record levels, Democrats switched from manufactured crisis to humanitarian, and turned their sights on processing centers that were overflowing."

Ocasio-Cortez told reporters after her July tour: "In that last facility, I was not safe from the officers in that facility."

The congresswoman said she found it to be a "violent culture." In a video released on Instagram, Ocasio-Cortez accused the U.S. government of running "concentration camps" on the border.

"We were arresting 12,000 people per week here," said Rodolfo Karisch, who is Chief Patrol Agent in the Rio Grande Valley Sector. "At one point time, I had 9,000 people in custody at all of our facilities, including the one that you're in."

Deputy Patrol Agent in Charge Oscar Escamilla told Logan: "I have gang members coming in here. As a matter of fact, I have two subjects who committed murder in the last 24 hours that we apprehended -- in this place. One of them committed double murders in the U.S. that we have in our custody."

Karisch said: "There is endless possibilities of what could happen. But it always comes back to this. People need to understand exactly what our job is. Our job is to protect this country, our communities. We're part of these communities. We care about what happens here."

In fact, one of the Border Patrol's biggest concerns in determining which children in their facilities are being smuggled or trafficked by the Mexican cartels.

"An agent said to me once, 'When I'm sitting in this center and I've got a father and a child in front of me... I'm looking at that child knowing that if this isn't his father, I'm his last hope'" said Logan.

"That's correct," agreed Escamilla. "This child could be exploited further."

Back in the field with the horse patrol agent, Logan asked them how they felt about the way the media represents them.

"I think the inaccuracy comes from the incompleteness," said agent Jorge Deleon.  "They only put out portions and sections of what we do. And there's never been a full [telling] to where it's a full understanding and educational for people to understand what it is that we do."

Calderon added: "You speak to these [migrants] and they'll tell you the more dangerous part of the journey is crossing Mexico. And then, they end up in the best hands. I mean, we provide them with food. We clothe them, even give them medical attention. We bathe them. I mean, we give them everything, basically, what they need.

"And then the media comes" he continued. "They say they're putting them in cages when that's not the case."

Logan said: "I almost feel like you have to apologize for upholding the law and protecting the border."

"They make it feel like it's wrong -- to actually do what your job is -- what you're supposed to be doing," said Calderon.