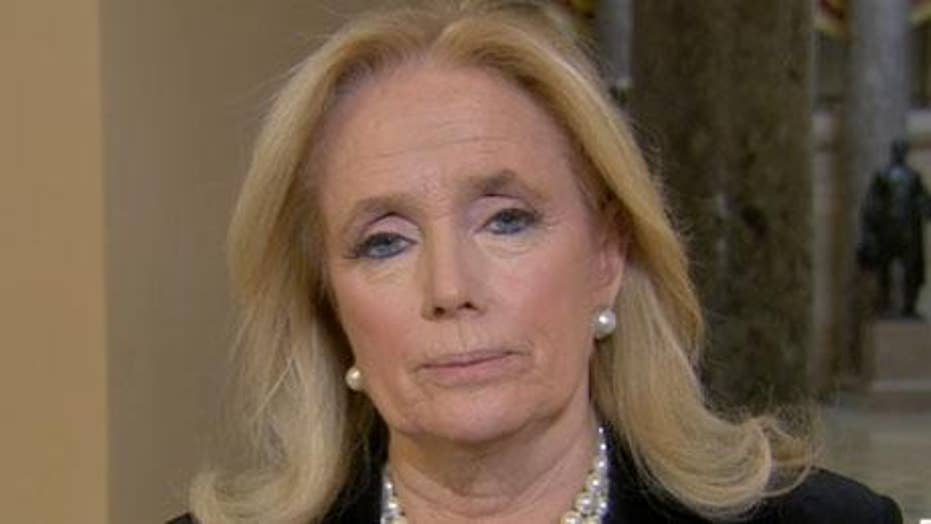 Debbie Dingell, DPCC Co-Chair, discusses how she would like Nancy Pelosi to move forward with impeachment

Rep. Debbie Dingell, D-Mich., said Thursday that her message to President Trump today is that she believes "we should put politics aside."

Appearing on "America's Newsroom" with host Sandra Smith, Dingell said that her husband -- the late John Dingell -- was the love of her life.

At a Wednesday "Merry Christmas" rally in her home state, the president attacked Dingell and her husband as the House voted to impeach him.

“Debbie Dingell, that’s a real beauty,” the president said to a rapt crowd that booed the mention of Dingell's name. Trump said he gave John Dingell the “A+ treatment” after his death last February and Debbie had called him to say “it’s the nicest thing that’s ever happened, thank you so much. John would be so thrilled. He’s looking down.”

“I said, 'That's OK. Don't worry about it.' Maybe he's looking up. I don't know," he quipped to mixed reactions from the audience.

Dingell, who voted to impeach the president Wednesday, responded on Twitter, writing, “Mr. President, let’s set politics aside. My husband earned all his accolades after a lifetime of service. I’m preparing for the first holiday season without the man I love. You brought me down in a way you can never imagine and your hurtful words just made my healing much harder.”

"I was already having a hard time with this holiday, and the comment that he made was just -- it made me sad," she said. "But I'm going to keep doing my job and I'm going to work with Republicans and Democrats, as I always do."

She added that "compromise isn't a dirty word," and "we need to listen to each other" and "respect each other."

"Treat each other with dignity and respect and you can get things done," she stated.

Dingell also said that House Speaker Nancy Pelosi, D-Calif., plans on meeting with leadership in determining what the next steps should be and also wants to make sure there's going to be a fair trial in the Senate -- a point receiving pushback from Republicans who believe the entire process was a highly partisan "sham."

"I think there is concern by many people that the senators are what we call jurors, and that people should be going into this objectively and that there should be fair rules," she told Smith. "And, I don't think she plans on sitting on it forever. I'm not sure."

"But, I think what she wants to do is make sure, because it is such a serious, grave, matter, that we move forward in a serious, transparent process for the American people," said Dingell.

"I don't think she plans on making this a circus."