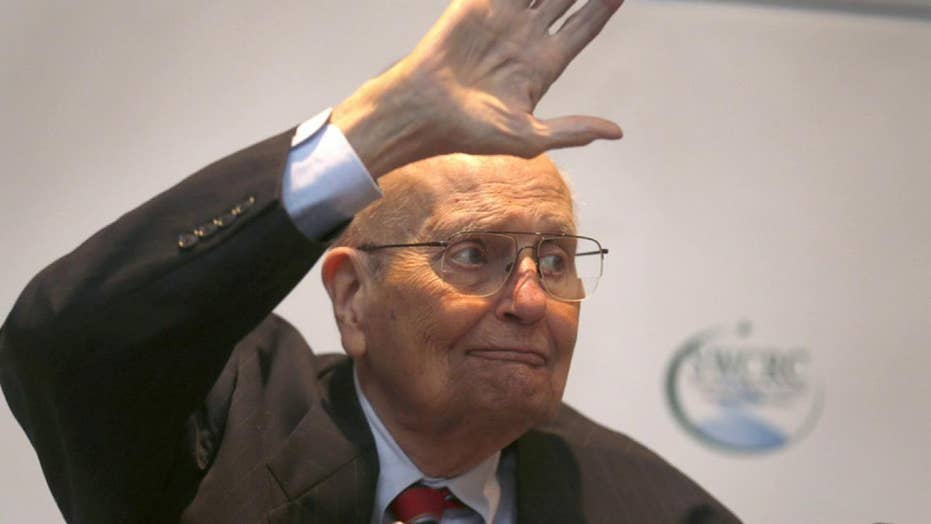 The life and times of John Dingell

John Dingell, the longest-serving member in the history of Congress, died Thursday at 92, Fox News has confirmed.

Dingell served 21,572 days in Congress from December 1955 through January 2015. He succeeded his father in the House of Representatives.

He is survived by his wife, Debbie, who currently holds his House seat and four children. A cause of death was not immediately known.

“It is with a heavy heart that we announce the passing of John David Dingell, Jr., former Michigan Congressman and longest-serving member of the United States Congress," the congresswoman said in a statement following Dingell's death.

"Congressman Dingell died peacefully today at his home in Dearborn, surrounded by his wife Deborah. He was a lion of the United States Congress and a loving son, father, husband, grandfather, and friend. He will be remembered for his decades of public service to the people of Southeast Michigan, his razor sharp wit, and a lifetime of dedication to improving the lives of all who walk this earth.”

The Michigan Democrat was considered an authority on Congressional procedures, akin to the legendary Sen. Robert Byrd, D-WV. Dingell was best known for his legislative skills, deep reverence for history and stinging wit.

Nicknamed “The Truck” during his longtime tenure as chair of the House Energy and Commerce Committee, the congressman from Detroit fueled the passage of many landmark measures, including health care reform, energy regulations and telecommunications expansion.

Beyond Dingell’s policymaking prowess, journalists, aides and fellow lawmakers frequently sought the opinion of the dean of the House to put current events in context. Did Congress really deserve those abysmal approval ratings? Had partisanship spiked out of control? How could legislating, an inherently messy process, be done more efficiently?

In his answer, Dingell quoted Benjamin Franklin’s response to a question of whether the founders had created a monarchy or a republic: “A republic, if you can keep it.”

“We have the privilege of serving as part of perhaps the greatest experiment in the history of government,” Dingell said in 2011.

By the time Dingell hit the record for the longest tenure in the House in February 2009, he was the Democrats’ go-to colleague for underlining a moment’s historical significance. Dingell’s presence at a press conference or in the chamber for a speech would immediately give an event a more serious tone.

“He will be remembered as one of the most influential members of Congress not to have served as president,” said former Rep. Joe Barton, R-Texas, who served on the Energy and Commerce Committee with Dingell for two decades.

In this July 29, 2015 photo, former Rep. John Dingell, D-Mich., speaks at an event marking the 50th Anniversary of Medicare and Medicaid on Capitol Hill in Washington.  (AP Photo/Susan Walsh)

Dingell first stepped onto the House floor when he was only six years old. Throughout his childhood, he often visited the Capitol with his father, Rep. John Dingell Sr., D-Mi., whose district he would later represent. The younger Dingell served as a House page starting at the age of 12.

Six years later, Dingell joined the army as the United States entered World War II, eventually rising to the rank of Second Lieutenant. After he finished his military service in 1946, he returned to Washington to attend Georgetown University, and subsequently, Georgetown Law School. He then took on stints as a park ranger, a Michigan county prosecutor, and a manager of his own private law practice.

In 1955, Dingell’s father died while still in office, leaving a vacancy for a seat he had held for 22 years. The younger Dingell, then 29, subsequently made his entry into politics by running in the special election to replace him. In 27 consecutive elections, he won less than 60 percent of the vote only twice: in 1994 and 2010, during landmark Republican waves.

In 1981, Dingell became the chairman of the House Energy and Commerce Committee, a position he held until 1995 and regained in 2007. He emerged as one of the most powerful committee chairmen ever to serve in Congress, growing his jurisdiction to the point that the committee received up to 40 percent of all House bills. He also had the largest budget and staff of any House committee.

In addition to representing a district from Detroit, the center of the auto industry, Dingell had personal reasons for being called “The Truck”: his second wife of more than 30 years, Debbie, was the granddaughter of one of General Motors’ founders. She was also vice chairman of the General Motors Foundation until 2009 when she became a consultant to the American Automobile Policy Council.

Debbie Dingell succeeded her late husband in Congress in 2015. She had been a key figure in Michigan Democratic politics. Most notably, in 2008, she was a key proponent of moving the state’s presidential primary earlier in the nominating process, which resulted in controversy as the state lost half of its convention delegates.

In November 2008, tensions arose within the Democratic caucus as the leadership felt Dingell’s ties to the auto industry compromised his ability to craft comprehensive energy reform legislation. He was surprised to receive a challenge to his chairmanship from Rep. Henry Waxman, D-Ca., who claimed that he wouldn’t have a conflict of interest. House Speaker Nancy Pelosi, D-Ca., was ostensibly neutral, but Waxman would not have done it had she disapproved. Moreover, her closest allies supported Waxman.

While backed by the centrist Blue Dogs, Dingell lost to Waxman 137-122 in a vote held by secret ballot. As a peace offering, the Democratic leadership gave him the title of “chairman emeritus,” which meant he had seats on every subcommittee but no actual chairmanship.

“I’ve had a good run,” Dingell said in conceding defeat.

Over more than half a century in the House, Dingell helped pass several landmark measures, including civil rights and Medicare.

But the capstone to Dingell’s career was his role in crafting the 2010 health care reform legislation. Universal health care had been Dingell’s signature issue, just as it had been for his father. Dingell Sr. had introduced legislation at the start of every session for a national health insurance system, and the younger Dingell continued the tradition. He authored the Patient’s Bill of Rights, a key component of the 2010 measure.

Although he knew his words carried weight, Dingell was never above a dark sense of humor and sometimes startling candor.

In the heat of the debate to extend the payroll tax cut at the end of 2011, he said in a statement: “By adjourning, House Republicans have sent a clear message - they have two hearty words for the American people and it is not ‘Happy Holidays.’”

And when asked by the Capitol Hill newspaper Roll Call how he would have perceived the 112th Congress earlier in his career, he retorted, “I'd probably want to go and vomit.”

In July 2008, during debate on a bill he co-sponsored that gave the FDA expanded regulatory powers over the tobacco industry, Dingell would have none of House Minority Leader John Boehner’s, R-Ohio, complaint that the measure was a “bone-headed idea.”

In response to Boehner, a longtime smoker, Dingell admonished that “this legislation's on the floor because people are killing themselves smoking these evil cigarettes.”

He then made a prediction: “[T]he distinguished gentleman, the minority leader, is going to be amongst the next to die. He is committing suicide every time he puffs on one of those.”

But Dingell suffered from his own health problems in his later years. In October 2008, he underwent knee replacement surgery and was later hospitalized for post-surgical complications. He also had two heart operations and treatment for an artificial hip.

Even as he walked around the Capitol complex with a cane in his final years as a lawmaker, he showed no signs of leaving anytime soon. His reverence for the institution never faded, even as newcomers complained about heightened dysfunction and won elections by campaigning against Congress. In his later years, Dingell often took to Twitter, excoriating President Trump.

He last tweeted on Feb. 6 in a post he said he had dictated to his wife.

"The Lovely Deborah is insisting I rest and stay off here, but after long negotiations we've worked out a deal where she'll keep up with Twitter for me as I dictate the messages. I want to thank you all for your incredibly kind words and prayers. You're not done with me just yet."