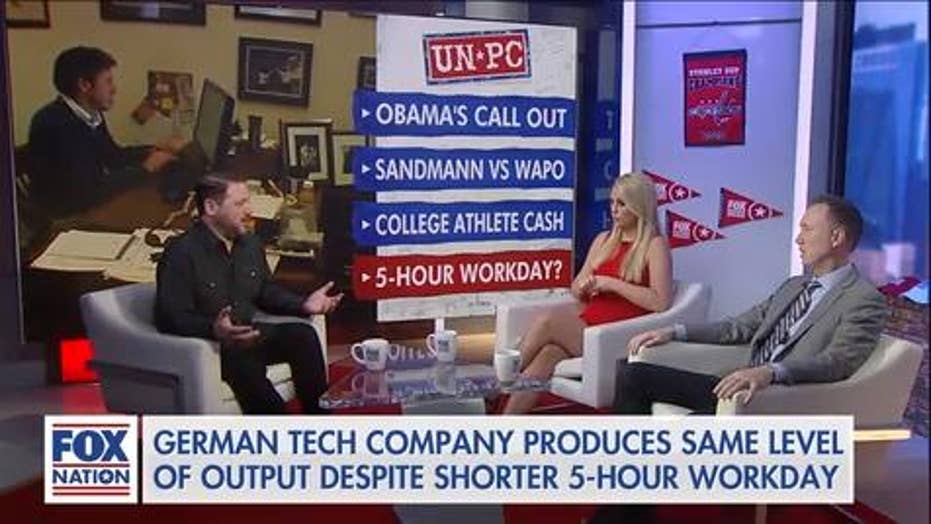 Could a five hour work day become the new norm in America?

Does leaving the office at 2 p.m. sound like a dream? Imagine a world where five-hour workdays are the new standard, with employees receiving the same compensation, vacation days and benefits as they do working an eight-hour day.

Discussing the matter in the latest episode of Fox Nation's "UNPC," host Tom Shillue said he supported the shorter workday and called lunch breaks "a waste of time."

"I think it's effective," said Shillue. "I've been calling for this for a long time ... first of all, lunch is ridiculous. It's a huge waste of time, it takes a big chunk out of the middle of the day."

Instead, Shillue suggested that employees "have breakfast at home, come into work, work the five-hour day and then go home and have dinner or lunch," he said.

The idea to cut employee's hours at Digital Enabler came from CEO Lasse Rheingans, who believes workers can deliver the same output during a 25-hour week as they would in a 40-hour week that contains more distractions.

Based on his theory that with the proper focus, employees can finish their tasks within the five-hour time frame, Rheingans banned cellphone and social media usage in the office, and limited meetings to last no more than 15 minutes. "Idle chit chat is also discouraged," The Wall Street reported.

"Rheingans believes that the employees will be highly motivated and productive so that they can start at 8 a.m. and leave by 1 p.m. This will afford his staff the opportunity to relax after work, have a life and come back refreshed," read the article. 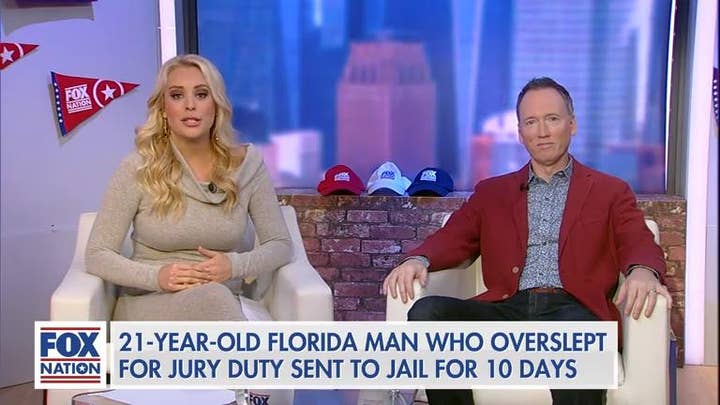 "Look at any office. I mean, wherever you go, people are wasting time. They got their dumb social media feed up there, they get the TV on, they're talking to their mother on their phone or whatever ... so, yes, take out all the distractions," Shillue agreed.

Ben Domenech, co-founder of The Federalist, also joined the episode and shared his thoughts on the revolutionary move.

"I think people are engaging in even worse behavior," said Domenech. "I think they're sitting here watching "The Office" on their computer as opposed to actually doing anything that they're being paid to do."

According to Rheingans, whose company develops websites, apps and e-commerce platforms, employees have been noticeably happier since the shorter workday was instituted — which leads them to produce a higher quality work product for their clients, he explained.

Could a 5-hour workday become the new norm in America?

"With a rapid rise in worker burnout and other mental health issues related to the workplace, a reduced workday may help too," the Journal wrote.

Domenech believes the issue boils down to one of "culture problems," and suggested an alternative method to boost productivity in the workplace.

"It's a situation where I think you have fundamental cultural problems that are underlying a lot of this...the assumption about the way that your time ought to be used," he said, "and you can't just shift to that from the expectations that you have of how long your store is going to be open or, when you're going to be in work and in that business and dealing with different pieces of information coming in."

Instead, Domenech believes it comes down to "figuring out how to chop up our days better to do small tasks and to do big tasks."

"Whether you're going to be responding to emails and getting rid of the different small things that are on your plate, on your desk, or whether you're going to be able to take the time to separate yourself from all of those devices, from the influx of information, and to think in a deeper way about long term project. That's something that I really think is a core problem to the way that we've managed our workdays here in America. And it needs to change in order to have the time and space for deeper creative work," he said.

"The people who are able to do that, I think are going to continue to be successful in this world and the people who can't, I think that they're going to find that that ability to deal with sort of multiple small things all the time diminishes in value as you get older."

Agreeing with Domenech, co-host Britt Mchenry said it is up to the individual worker to "figure out a pace in which they are most effective" and called for an end to standard business hours.

"I don't think you need to physically sit in a building clocking in, whether it's 5 or 8 hours," she said.  "I think no matter what time you can get your job done based on your individual performance that's assessed, that should be allowed."

7 ELEMENTS OF A STRONG WORK ETHIC

"If we allowed our creativity and our own way of divvying up the workday to dictate how we do our work, I think it'd be much more effective," she added.

To see the full discussion and more, join Fox Nation and watch the latest episode of "UNPC" today.