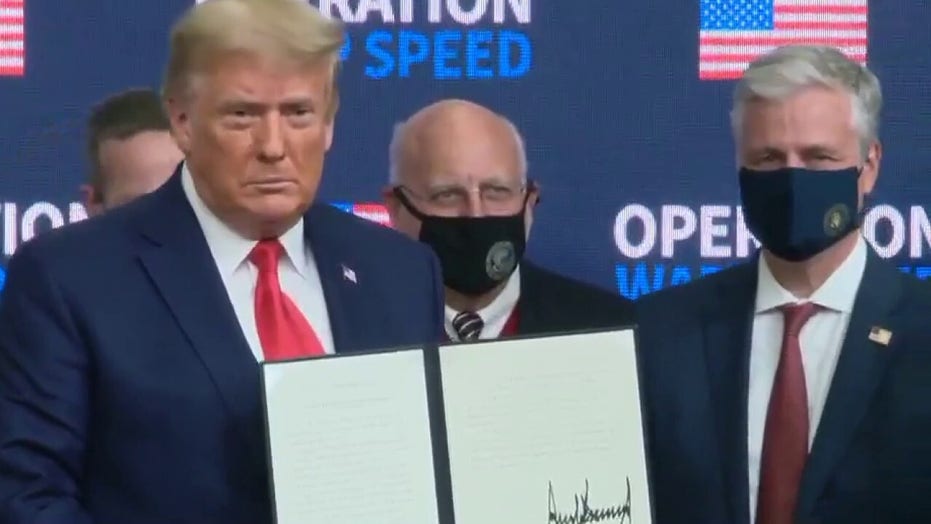 President Trump on Tuesday said the forthcoming coronavirus vaccines “will end the pandemic,” saying the U.S. is just “days away” from the first “safe and effective vaccine” to combat COVID-19 – but anyone who relies on CNN and MSNBC for news didn’t catch his remarks live as the liberal networks didn’t bother to air the historic event.

The president, during the vaccine summit at the White House, touted Operation Warp Speed – his administration’s public-private partnership that was created over the summer to create a vaccine “at breakneck speed.”

CNN and MSNBC instead aired President-elect Joe Biden speaking about what his administration plans to do with the vaccine. During Biden’s remarks, he badly mispronounced the name of his nominee for Health and Human Services (HHS) secretary – former longtime California Congressman Xavier Becerra – and also botched his title, prompting many critics to mock the gaffe.

CNN and MSNBC have both ignored several press briefings and events during the Trump administration but skipping the vaccine summit still seemed odd to many observers because of the bipartisan interest in efforts to combat the pandemic.

“I was surprised the networks didn’t at least take President Trump…. He gets a lot of media flack for not talking much about COVID since the election and when he does, you see what happens and I think the president deserves credit for the success of the vaccine program because certainly, if it had faltered, he’d be blamed by the press,” "MediaBuzz" host Howard Kurtz said Wednesday on “America’s Newsroom.”

Kurtz said the mainstream media is increasingly treating Trump as a “lame duck” and Biden as the “new kid on the block.”

Viewers who were able to see Trump’s remarks, which were carried live on Fox News, heard the president providing critical details to the vaccine rollout.

“We’re just days away from the authorization from the FDA, and we’re pushing them hard,” the president said, adding that the U.S. government, following the agency's approval, will “immediately begin mass distribution.”

“We are very, very happy we were able to get things done at a level we haven’t seen before,” Trump said, saying that vaccines created by Pfizer and Moderna “are approximately 95 percent effective,” saying that projection was “far exceeding anything that really anybody thought.”

“We are very hopeful that the FDA will authorize the Pfizer vaccine within days, and the Moderna vaccine almost immediately thereafter,” Trump continued. “It will end the pandemic … people who aren’t necessarily fans of Donald Trump have said that this is one of the greatest miracles of any other age of medicine.”