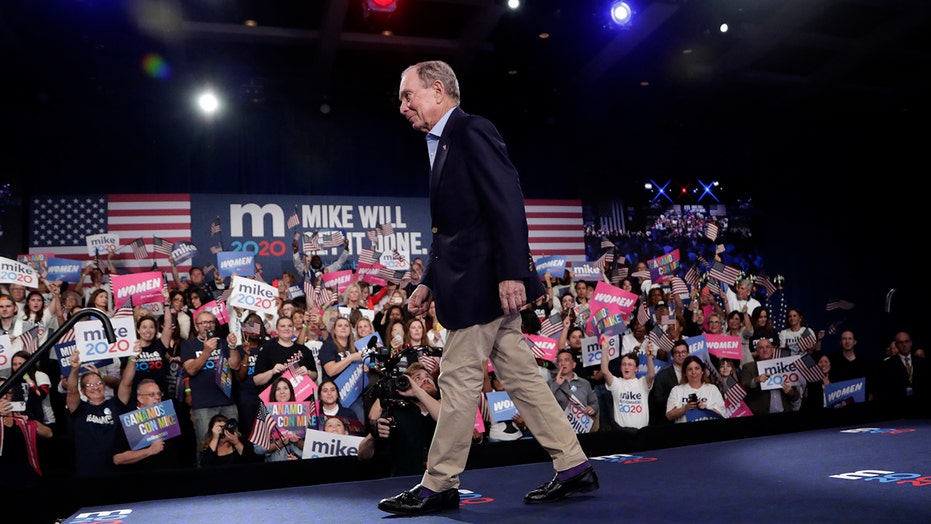 Chris Stirewalt on Mike Bloomberg's exit from 2020 race: Expect buyer's remorse from Democrats after next debate

Fox News digital politics editor Chris Stirewalt predicted Wednesday that Democratic voters who tune into a debate later this month and see Sens. Bernie Sanders, I-Vt., Elizabeth Warren, D-Mass., and former Vice President Joe Biden on stage will gasp when they realize the trio is all the party has left to face-off with President Trump.

Stirewalt reacted to former New York Mayor Mike Bloomberg's announcement that he is dropping out of the presidential sweepstakes, saying shortly after the mogul addressed supporters in Manhattan that it may not be the last the public sees of him.

Bloomberg, who was introduced by former Philadelphia Mayor Michael Nutter, appeared to have a "wistfulness" about him, according to Stirewalt.

"He has to be thinking, 'I kind of was good at this -- not in debating -- but I was kind of good at this,'" said Stirewalt, who added that while Bloomberg may regret that he waited until this past November to jump into the race, Democrats may not be done with him.

"When the buyer's remorse hits the Democrats as they watch that CNN debate stage [March 15] and they go 'Ughh, this is it?' When that happens, there's gonna be people who would say, 'Mike, did you ever think about getting back in this sucker and running it down?'"

Stirewalt also joked that Biden's campaign should only allow him to speak for "only five minutes at a time and then put him, in cover, covered up with Mike Bloomberg's money for as long as they can" in order to avoid more viral gaffes.

While Bloomberg endorsed Biden after dropping out, Stirewalt said Sen. Amy Klobuchar, D-Minn., seriously benefitted from her withdrawal-and-endorsement of Biden on Monday.

"Her vice-presidential stock is way, way, up," he claimed. "She delivered her home state for Biden in a big way and he needed it."