Acting Homeland Security Secretary Chad Wolf told "Bill Hemmer Reports" Wednesday that federal agents will not leave the city of Portland, Ore. until a federal courthouse that has been repeatedly attacked by rioters is "safe and secure."

"We will continue to keep law enforcement officers in the area to make sure that that courthouse is secure at the end of the day," Wolf told host Bill Hemmer.

Earlier Wednesday, Oregon Gov. Kate Brown announced that federal agents would begin a "phased withdrawal" from Portland Thursday. Wolf said that he and the governor had agreed on a plan to end "the violent activity in Portland directed at federal properties and law enforcement officers" that called for "the robust presence of Oregon State Police in downtown Portland."

"Over time," Wolf told Hemmer, "if the Oregon State Police and the plan that has been put in place is successful, and we can responsibly draw down law enforcement assets there, then we will." 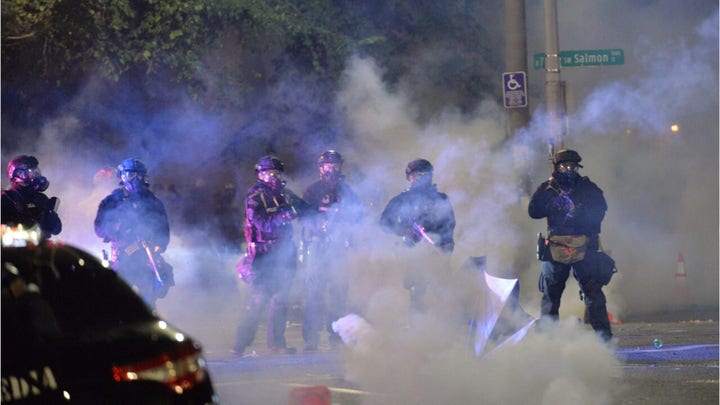 Portland has seen 62 consecutive nights of protests and demonstrations stemming from the May 25 death of George Floyd in Minneapolis police custody. Brown and Portland Mayor Ted Wheeler have repeatedly described the federal presence in terms of an "occupying force" and accused the Department of Homeland Security of an "illegal occupation" that has incited more violence in the city.

"What we know is that the violence in Portland, specifically, was there well before DHS or law enforcement officials arrived in Portland," Wolf responded. "The mayor, by his own words, declared that the city was under violence for more than a month before we got there, so this idea that we have somehow incited violence, the idea that enforcing federal law incites violence, is absolutely backward and I don't understand that."

The acting secretary added that he has only ever asked for "state or local law enforcement to step up and help us police around there [the courthouse] and to hold individuals accountable.

"So, Governor Brown has decided to step up. We see a sizable force of Oregon State Police that will be deployed to the area, and we will see if the plan that they have put in place will help quell the violence that we have seen around that federal courthouse in Portland, and we are going to take a cautious view of that."

The Oregon State Police told Fox News Thursday that special operation teams and uniformed troopers would assist city police and federal agents in the hope of instilling "an atmosphere that affords the removal of the protective fence and restore a semblance of normalcy, while meeting community expectations and our obligations to protect the federal property."

"I understand what his plan is," Wolf said of Oregon State Police Superintendent Travis Hampton. "They would have to successfully implement that plan [for the federal agents to leave]. I think they have to understand the criminal nature that they are up against every day. We will partner with them to do that. Again, we will protect federal property. That is our responsibility. I will continue to be our responsibility."