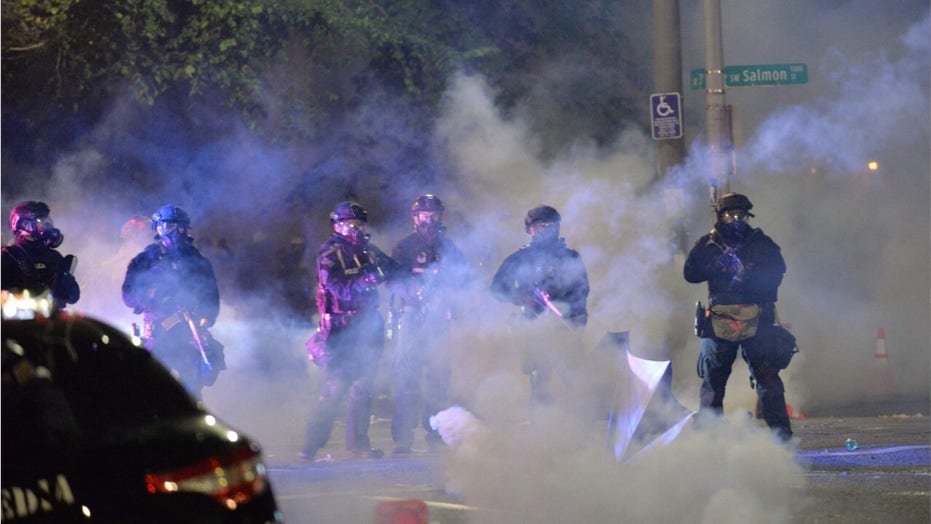 Over 24 hours of negotiating between Acting Secretary of Homeland Security Chad Wolf and Gov. Kate Brown has led to a joint plan that is aimed at ending the violent activity in Portland, Oregon directed at federal properties and law enforcement officers.”

The federal agents who have clashed with protesters in Portland will begin a “phased withdrawal” from the city's downtown area starting Thursday, Oregon's Democratic Gov. Kate Brown announced.

Acting Secretary of Homeland Security Chad Wolf said in a statement that he and Brown have been in contact over the past 24 hours and reached a joint plan to end "the violent activity in Portland directed at federal properties and law enforcement officers.”

“That plan includes the robust presence of Oregon State Police in downtown Portland,” Wolf said. “State and local law enforcement will begin securing properties and streets, especially those surrounding federal properties, that have been under nightly attack for the past two months. Oregon State Police will coordinate with Federal Protective Service (FPS) officers to ensure all federal facilities remained protected and secure."

In his statement, Wolf said that President Trump and his administration have been consistent in their message that "violent criminal activity" directed at federal properties and law enforcement will not be tolerated and that "state and local leaders must step forward and police their communities."

"The Department of Homeland Security will not back down from our legal duty to protect federal law enforcement officers and properties in the face of such criminal behavior," he continued.

“President Trump has also made it clear that this Administration is ready and willing to partner with state and local law enforcement to protect every American – and you see that commitment in Portland with this plan. The Department and this Administration will also continue to fulfill its solemn obligation to uphold federal law across the country," Wolf said.

But Brown accused federal officers of bringing the violence and acting as an occupying force in announcing the joint plan to withdraw federal forces from Portland – before then praising the Black Lives Matter movement.

“After my discussions with VP Pence and others, the federal government has agreed to withdraw federal officers from Portland. They have acted as an occupying force & brought violence. Starting tomorrow, all Customs and Border Protection & ICE officers will leave downtown Portland,” the governor tweeted.

“Our local Oregon State Police officers will be downtown to protect Oregonians' right to free speech and keep the peace. Let's center the Black Lives Matter movement's demands for racial justice and police accountability. It's time for bold action to reform police practices."

Crowds -- ranging from hundreds to thousands of people -- have tried almost every night to tear down a fence erected to protect the Mark O. Hatfield U.S. Courthouse. They’ve set fires and hurled fireworks, Molotov cocktails, and bricks, rocks, and bottles at the agents inside. Authorities this week reinforced the fence by putting concrete highway barriers around it. Federal officers often respond by firing tear gas, pepper balls, and impact munitions.