Tulare County Sheriff Mike Boudreaux shares how a California police officer saved a teacher who was exposed to fentanyl after a 13-year-old brought pills to school.

A California sheriff warned Tuesday on "Fox & Friends" about the growing fentanyl crisis after a middle school teacher needed life-saving Narcan due to exposure to the powerful opioid.

Tulare County Sheriff Mike Boudreaux said the incident stemmed from a 13-year-old student being found at school with 150 pills, which were disguised as Percocet.

"The cap was pulled and he looked inside. It was just an inhalation and that exposure required emergency services and immediate action by the officer," Boudreaux told host Ainsley Earhardt.

The student, who was not identified, was arrested. Police were investigating whether any of the pills were sold to other students.

Customs and Border Protection agents in Arizona seized over 15,000 fentanyl pills that were strapped to a person's legs on Wednesday, and one official says that it could be the start of a trend targeting younger people. (Port Director Michael W. Humphries)

Sheriff Boudreaux pointed to the southern border as a key factor influencing the prevalence of fentanyl poisonings and the drastic spike in deaths.

"There are guns, sex trafficking, human trafficking and drugs, fentanyl, most importantly, which is impacting us significantly, all coming across this open border," Boudreaux said. 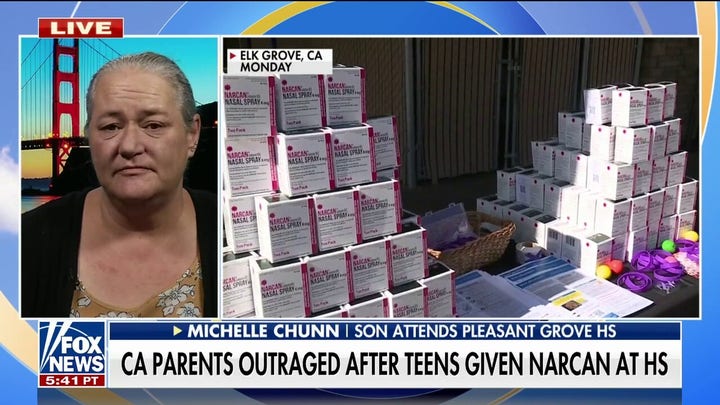 Hundreds of law enforcement officials and politicians including Sen. Marco Rubio, R-Fla., have called on the Biden administration to take a stronger stance on border security to combat fentanyl flooding into American cities.

"I have been calling out for public safety and for the safety of Americans and Californians to close the border because of this epidemic."