Fox News contributor Newt Gingrich says the idea of a Kamala Harris presidency is 'astonishingly frightening' on 'The Ingraham Angle.'

Fox News contributor Newt Gingrich called on President Biden not to allow Vice President Kamala Harris to leave the United States or her home at the Naval Observatory Tuesday on "The Ingraham Angle."

"The first thing you do is you send her to the Naval Observatory, which is the home of the vice president, and you say, 'Please don't leave for the next three years.' And you offer her books and movies and video games, but you don't let her leave. The second thing I think you do is you find somebody — whether it's the secretary of state or somebody else — who[m] you empower to go around the world and pretend they're you. But you don't allow her ever again to leave the United States."

"People need to realize this isn't just politics. It's not just funny," he added. "You have people all around the world watching the United States be humiliatingly incompetent. And I think it is a dramatic wound to our position in the world to have Kamala Harris go anywhere." 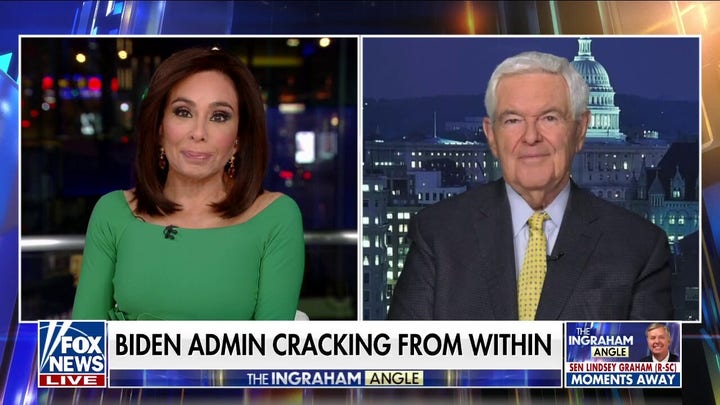 He said he has never seen "a national political figure who is as self-destructive as Kamala Harris."

As for Biden, Gingrich said he should ensure that Ukraine is receiving anti-ship missiles to destroy Russian warships in the Black Sea.

He asked if Biden's promised high-altitude anti-aircraft missiles have arrived in Ukraine, saying if Russian President Vladimir Putin continues to kill civilians, Biden should vow to "give surface-to-surface missiles and cruise missiles to Ukraine so they can hit Russian airfields and Russian missile bases that are firing into civilians."

Gingrich suggested Biden agree on a "public, explicit commitment" with NATO that if Putin uses chemical weapons, they will "immediately, within a couple of hours" do everything in their power to destroy his ability to use them.