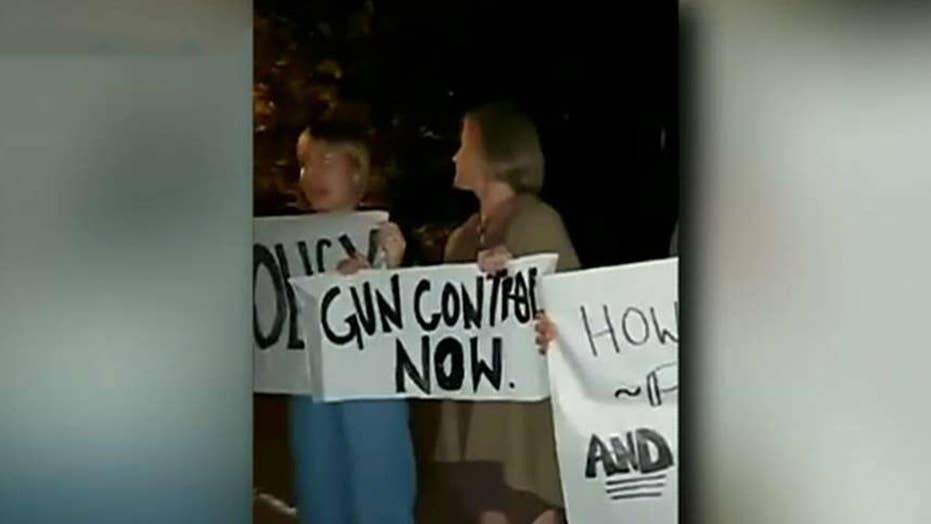 Protester calls to stab McConnell 'in the heart'; reaction and analysis on 'The Five.'

"'Boys will be boys.' Is that also the reason why you’ve chosen to block the Violence Against Women act too, @senatemajldr?" she tweeted at McConnell on Tuesday.

Her tweet was part of a running feud that started with the freshman congresswomen calling out McConnell's campaign over a photo of apparently underage boys groping and strangling a cardboard cutout bearing her image. The boys wore "Team Mitch" T-shirts.

When The Daily Beast reported on the McConnell campaign's response, it claimed that his campaign manager "essentially says boys will be boys."

McConnell campaign spokesman Kevin Golden distanced his campaign from the photo and clarified that his team didn't condone the boys' behavior.

“Team Mitch in no way condones any aggressive, suggestive or demeaning act toward life-sized cardboard cutouts of any gender,” he said.

Golden added, “These young men are not campaign staff, they’re high schoolers and it’s incredible that the national media has sought to once again paint a target on their backs rather than report real and significant news in our country."

McConnell's campaign on Tuesday accused Ocasio-Cortez of encouraging threats against the senator.

"Rep. Alexandria Ocasio-Cortez and liberal Twitter personalities are trying to dox some underage kids for taking a photo with a cutout at the Fancy Farm political picnic and are cheering on thousands of accounts calling for Senator McConnell to 'break his neck,’" Team Mitch, the Kentucky Republican's campaign account, tweeted on Tuesday.

McConnell's campaign did not immediately respond to Fox News' request for comment.