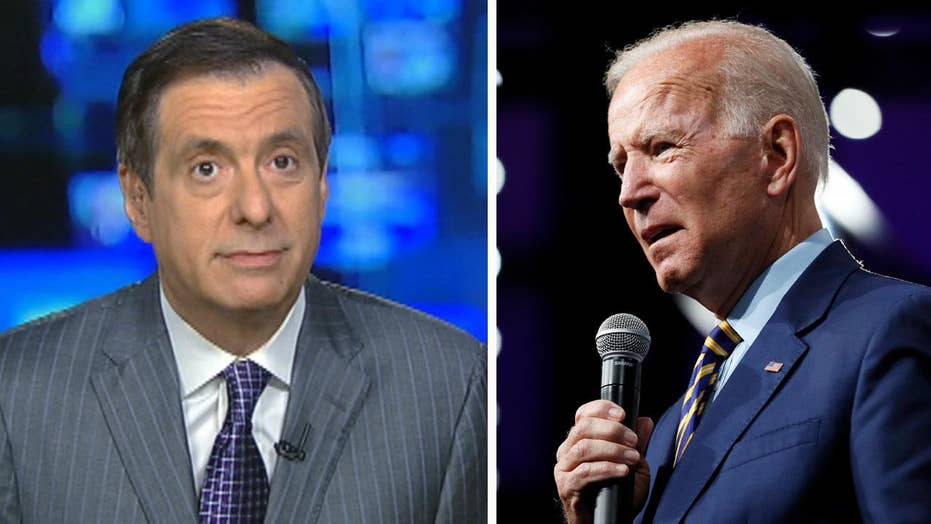 Howard Kurtz: Why the press is pouncing on every Biden misstep

'MediaBuzz' host Howard Kurtz weighs in on Democratic presidential candidates and some mainstream media outlets spotlighting every 'gaffe' made by Joe Biden.

Joe Biden has always been a gaffe machine—and that’s his defense.

A series of verbal missteps by the former vice president has become a trend story for the media and prime fodder for Donald Trump. Now every time he screws up a sentence, it reinforces a question that even some Democrats are asking: Is Biden, at 76, no longer as sharp as he used to be?

It’s reached the point where every stumble becomes fresh evidence for the thesis. Is that fair? It’s politics.

“This is a press narrative, not a voter narrative,” campaign spokeswoman Symone Sanders told CNN. There’s an element of truth in that, because similar blunders by other candidates would not be viewed as having a larger significance.

SCARAMUCCI SAYS SOME EX-TRUMP AIDES BACK HIS CRITICISMS OF PRESIDENT

When Al Gore was found to have exaggerated something in a presidential debate, every slight embellishment was seized upon. When Dan Quayle misspelled potato, the media jumped on anything that indicated a low IQ. And there was a reason the press dubbed one president Slick Willie.

The current president is on gaffe patrol, with his usual degree of subtlety.

“Joe Biden has truly lost his fastball,” Trump told reporters. Another day it was “Joe is not playing with a full deck.” At this rate, he’ll be saying Biden is a few fries short of a Happy Meal.

Except he dropped the metaphors on Twitter over the weekend, questioning whether Biden “is mentally fit to be president.”

Biden has been tripping over his words since I covered him back when he was Senate Judiciary chairman. But now, of course, he’s the Democratic front-runner.

“Joe Biden’s verbal miscues have always been part of his charm, baked into his reputation as a plain-spoken politician.” And with Trump on the attack, the paper says, that’s raising questions about whether Biden “is a man past his prime.”

The New York Times, saying the candidate and his aides are enormously frustrated by the emerging storyline, which carries “a real political risk for Mr. Biden. Some party activists have already been worried that, at 76, he may be too old to go toe-to-toe with Mr. Trump, who is 73, and win. If the accumulation of verbal missteps continues, some Democrats say, it will eventually sow doubts about what many primary voters believe is Mr. Biden’s biggest strength: that he is best positioned to beat Mr. Trump.”

Biden allies say Trump’s missteps and fabrications are far worse. They praise their man for being authentic and speaking like a real person (which echoes what Trump defenders say).

Among the recent mistakes:

Biden said “poor kids” were just as talented as “white kids”—and then added black kids and Asian kids. He said he’d met with Parkland high school students as VP—it was actually kids from Sandy Hook Elementary (though he did meet with Parkland students after leaving office). He said Margaret Thatcher when he meant Theresa May. He said he valued “truth over facts.” He said the mass shootings took place in Houston and Michigan (Trump also misspoke in saying one location was Toledo, not Dayton).

The Post story has advisers recalling gaffes when Biden was much younger, in an effort to demonstrate that this has nothing to do with age. For instance, the first day of his 2008 presidential campaign, when he praised Barack Obama as “the first mainstream African American who is articulate and bright and clean and a nice-looking guy.” (It’s cringe-inducing even now.)

If I wanted to say this was damaging his candidacy, I’d point to a new YouGov/Economist poll that has Elizabeth Warren in a statistical tie for the lead: Biden 21, Warren, 20, Bernie 16, Kamala 8. But for now, the poll seems to be an outlier.

Speaking of Bernie Sanders, he has backed off his criticism of the Washington Post.

Sanders previously said that he’s been highly critical of Amazon not paying taxes and not paying enough in wages: “And then I wonder why The Washington Post — which is owned by Jeff Bezos, who owns Amazon — doesn’t write particularly good articles about me. I don’t know why. But I guess maybe there’s a connection.”

Post Executive Editor Marty Baron shot back that “contrary to the conspiracy theory the senator seems to favor, Jeff Bezos allows our newsroom to operate with full independence, as our reporters and editors can attest.”

Now Bernie has conceded to CNN: “Do I think Jeff Bezos is on the phone, telling the editor of The Washington Post what to do? Absolutely not. It doesn’t work that way.”

He then broadened his critique to “corporate media,” saying: “Not one reporter has ever asked me, ‘Bernie, what are you going to do about the grotesque level of income and wealth inequality?’ Are you gonna ask me that? Is that part of what media talks about?”

Fair point, unlike the charge against the Post. Except that Bernie talks about income inequality so often in his campaign that he doesn’t really need to be asked.