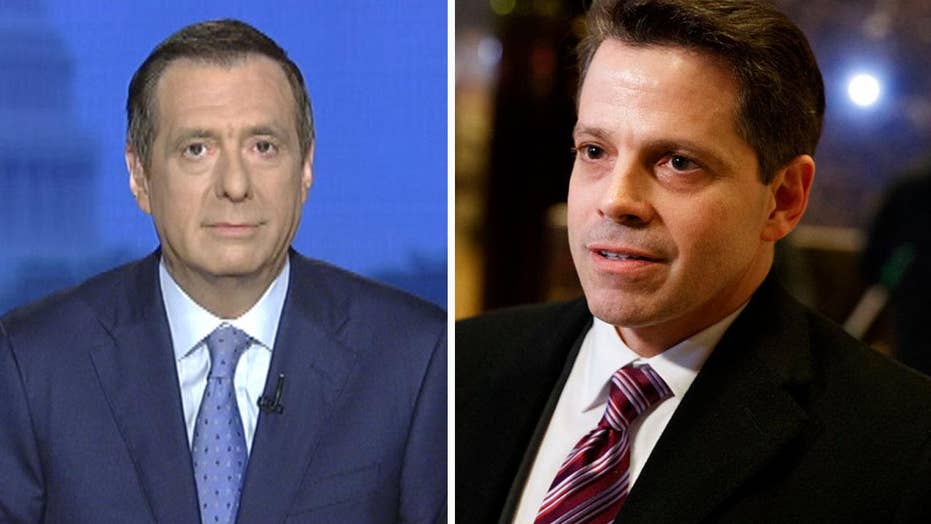 Anthony Scaramucci, now embroiled in a war of words with the man he once served, said in an interview that several former Cabinet officials have called to support his increasingly pointed criticisms of President Trump.

“One of them said the current rhetoric is unacceptable and he is dividing us,” Scaramucci told me, but that “nobody is willing to come out yet” and say such things publicly.

We spoke not long after the president went off on his onetime communications director, telling reporters at a gaggle that Scaramucci, who lasted in his position for just 11 days, “really didn’t have a clue” and is “very much out of control.”

Trump said the Mooch (Scaramucci's famous nickname) was “begging me to come back” to the White House and is “a nervous neurotic wreck. He called so much,” prompting the president to say “you’ve got to stop all these phone calls. Too many calls, Anthony.”

In response, Scaramucci told me that he “never once begged him to get back in the administration.” The Mooch, a New York hedge fund manager, said he was in the process of getting divorced as a result of his previous stint in Washington and has “spent the last two years privately working on my marriage.”

Scaramucci, who had remained an informal adviser, said he called Trump three times since Easter, and “got the message” when the calls weren’t returned.

The dramatic deterioration of their relationship is a sort of case study in the roller-coaster environment of Trump World.

Not surprisingly, Scaramucci has gotten plenty of blowback from conservatives, along with criticism that he’s intent on a bigger share of the media spotlight. Others have ripped Scaramucci, who once wrote a book of praise called “The Blue-Collar President,” for waiting too long to speak out.

“I have to own the fact that I didn’t break earlier,” Scaramucci said in the interview. “But it’s unfair to suggest it just came overnight.”

I’ve interviewed the Mooch many times, and he’s generally supported Trump while often criticizing his tweets and harsher rhetoric, such as calling some news outlets the “enemy of the people.” He’s also challenged Trump on such issues as tariffs and family separations at the border.

But he took a different tone on “Media Buzz” on July 21, after Trump’s attacks on four Democratic congresswomen of color. Scaramucci said then that the president was in danger of being primaried: “I’m my own guy. These are racist comments, period full stop. The fact that we even have to debate this means that the president is in trouble on this.”

After other such appearances, especially one on Bill Maher’s HBO show, POTUS had had enough. He tweeted that Scaramucci “was quickly terminated” from “a position that he was totally incapable of handling,” and “should remember the only reason he is on TV, and it’s not for being the Mooch!”

But Scaramucci fired back anyway: “Eventually he turns on everyone and soon it will be you and then the entire country.”

Since then, the rhetoric has escalated, with Scaramucci telling CNN that Trump is “off the rails” and “actually dissembling a little bit.”

The Mooch has moved from saying Trump might face a primary to openly encouraging a Republican to challenge him. “We can replace him at the top of the ticket,” Scaramucci told me.

That would almost certainly be a futile mission, given the president’s popularity among GOP voters.

The presidential policies that Scaramucci views as positive “don’t outweigh the malice and stirring of discontent in society,” he told me. “He’s normalizing anger and giving people a license to go off and hate each other. … It’s anti-American to be a bully.”

Loyalty is always a fragile concept in politics, but perhaps even more so in the Trump era, since the billionaire businessman didn’t take office with a longtime coterie of government and campaign types.

Michael Cohen, his lawyer and longtime fixer -- now serving a prison term -- once said he’d take a bullet for Trump; he wound up calling him a “con man” and “racist” (while cooperating with prosecutors after pleading guilty).

Jeff Sessions mostly held his tongue, but the president increasingly ripped his onetime attorney general as weak and disloyal (for recusing himself in the Mueller probe) until his inevitable departure from the administration.

In fairness, some who were fired by Trump or resigned remained supportive as informal advisers, from Corey Lewandowski to Reince Priebus. Even Steve Bannon, dubbed “Sloppy Steve” when, after leaving the White House, he was quoted saying unfavorable things about Trump and his family, recently drew presidential praise and seems to have been welcomed back into the fold.

That seems unlikely with Scaramucci, however, given the severity of the breach and the way that Trump officials are now denouncing him.

“This is all so self-serving on his part and the media plays right into it,” Press Secretary Stephanie Grisham said in a statement. “It’s embarrassing to watch.”