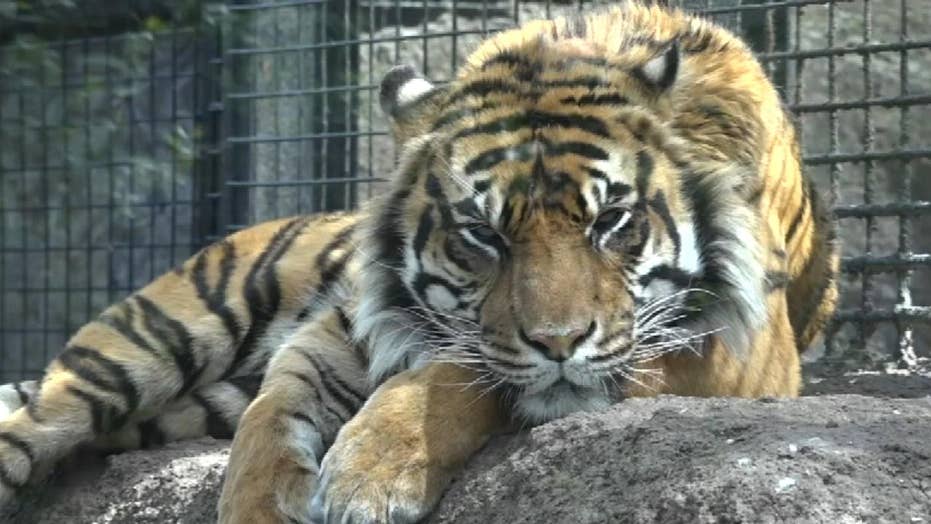 Veteran worker at the Topeka Zoo sent to the hospital with lacerations and puncture wounds after attack by Sumatran tiger.

A zookeeper who was mauled by a Sumatran tiger at the Topeka Zoo in northeastern Kansas on Saturday was in stable condition following surgery, a local newspaper reported.

The Topeka Capital-Journal reported that the attack occurred about 9:30 a.m., when the tiger, named Sanjiv, attacked the worker in a secured, indoor space.

VIENNA ZOO GETS MALE PANDA AS PARTNER FOR LONGTIME RESIDENT

The unidentified woman suffered lacerations and puncture wounds to her head, neck and back, Topeka Zoo Director Brendan Wiley told the newspaper.

Wiley the zookeeper was awake and alert when she was taken by ambulance to a hospital. City spokeswoman Molly Hadfield said the zoo was open at the time of the attack and the incident was witnessed by some people.

Topeka's FOX affiliate, KSNT-TV, reported that all of the zoo's tigers were removed from their public enclosures for the day.

Wiley said there was "no consideration" that the tiger involved in the attack would be euthanized, the station reported.

The zoo reopened about 45 minutes after the attack.

Sanjiv came to the Topeka Zoo in August 2017 from a zoo in Akron, Ohio.